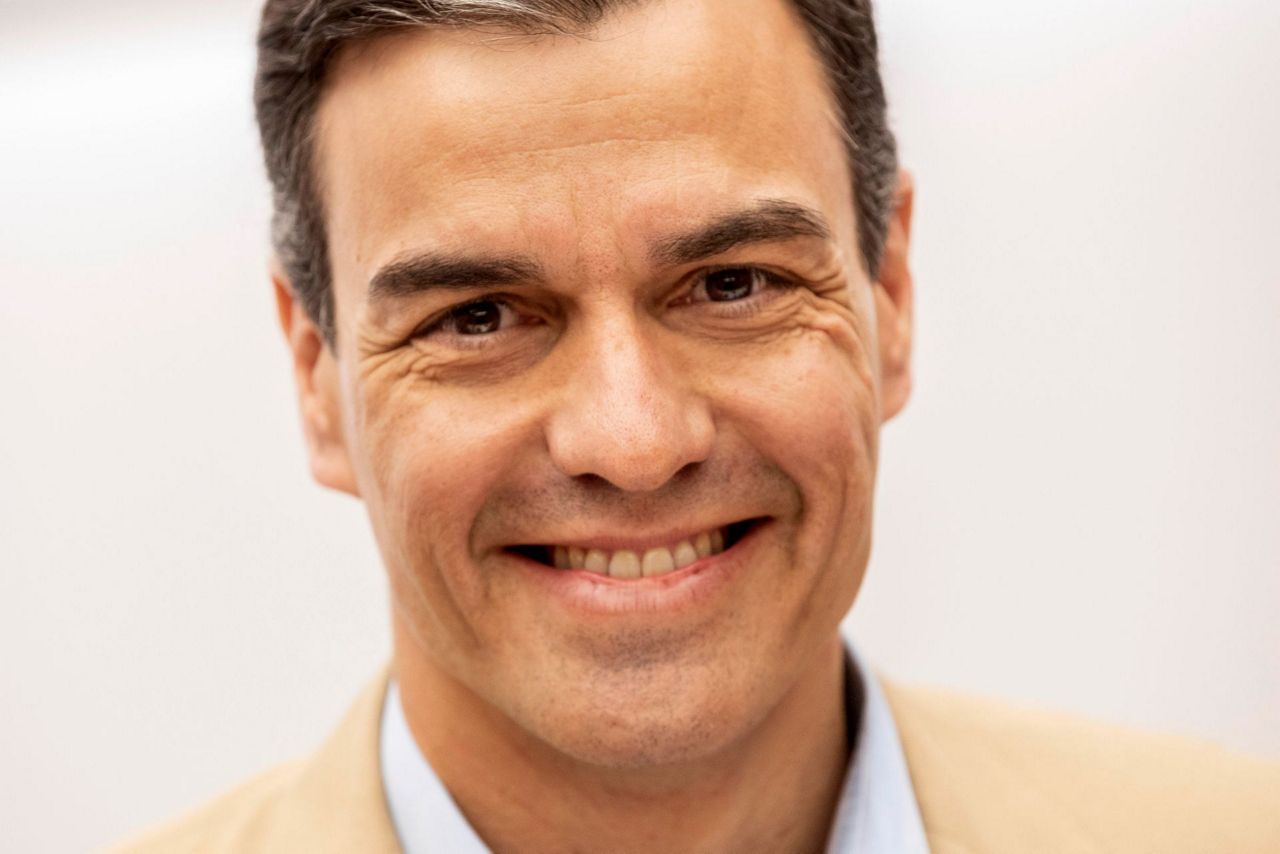 1 of 5
Spain's Prime Minister Pedro Sanchez smiles during a party meeting at Socialist party headquarters in Madrid, Spain, Monday, April 29, 2019. Spain's political future is no clearer after a third election since 2015, with experts saying Monday that it won't be anytime soon before the muddle is resolved. The incumbent prime minister, Pedro Sanchez, celebrated after his Socialist party won the most votes in Sunday's ballot. But Spanish politicians were doing the math on how Sanchez might survive the next four years without a parliamentary majority. (AP Photo/Bernat Armangue) 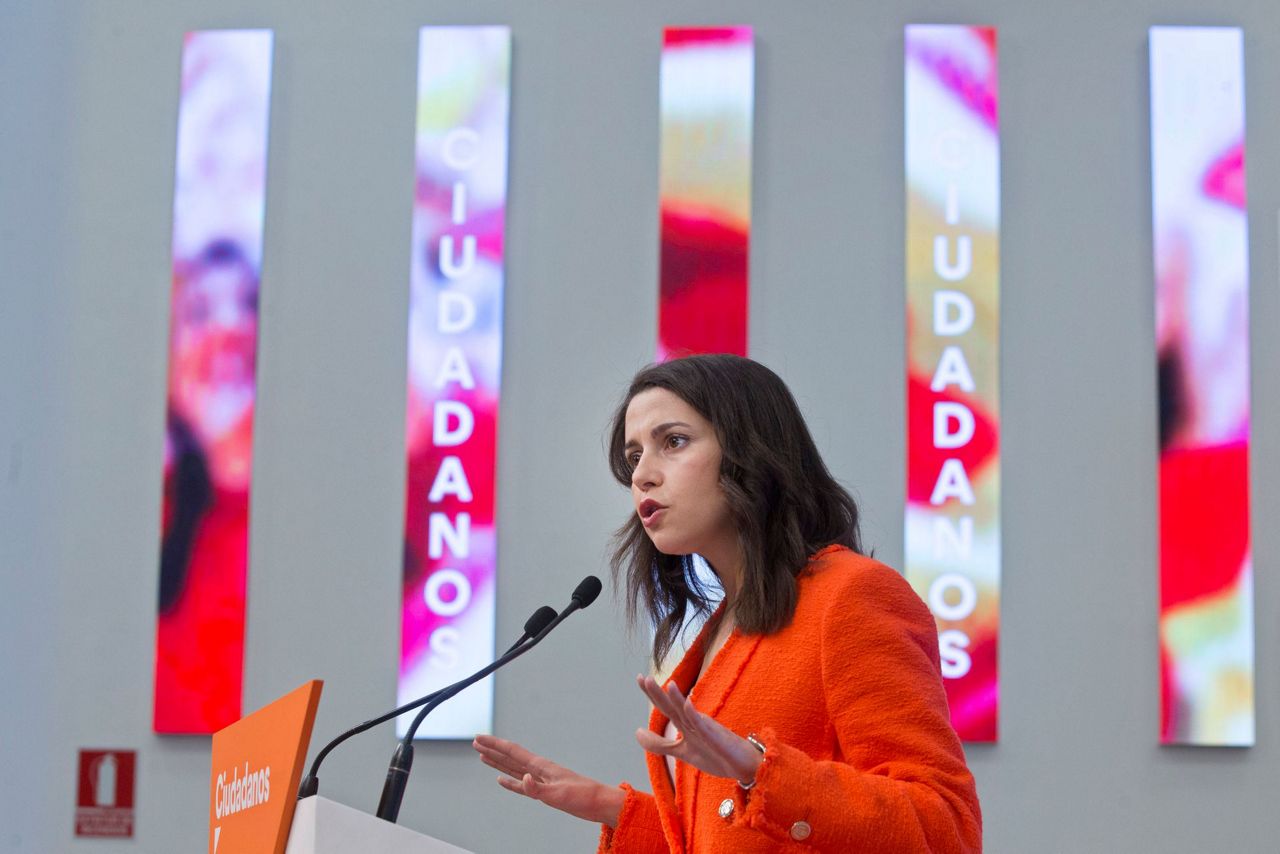 2 of 5
National party spokesperson Ines Arrimadas of the center-right Ciudadanos party speaks during a news conference the day after Spain's General elections in Madrid, Spain, Monday, April 29, 2019. Spain's governing Socialists have won the country's election but will need backing from smaller parties to stay in power. (AP Photo/Paul White) 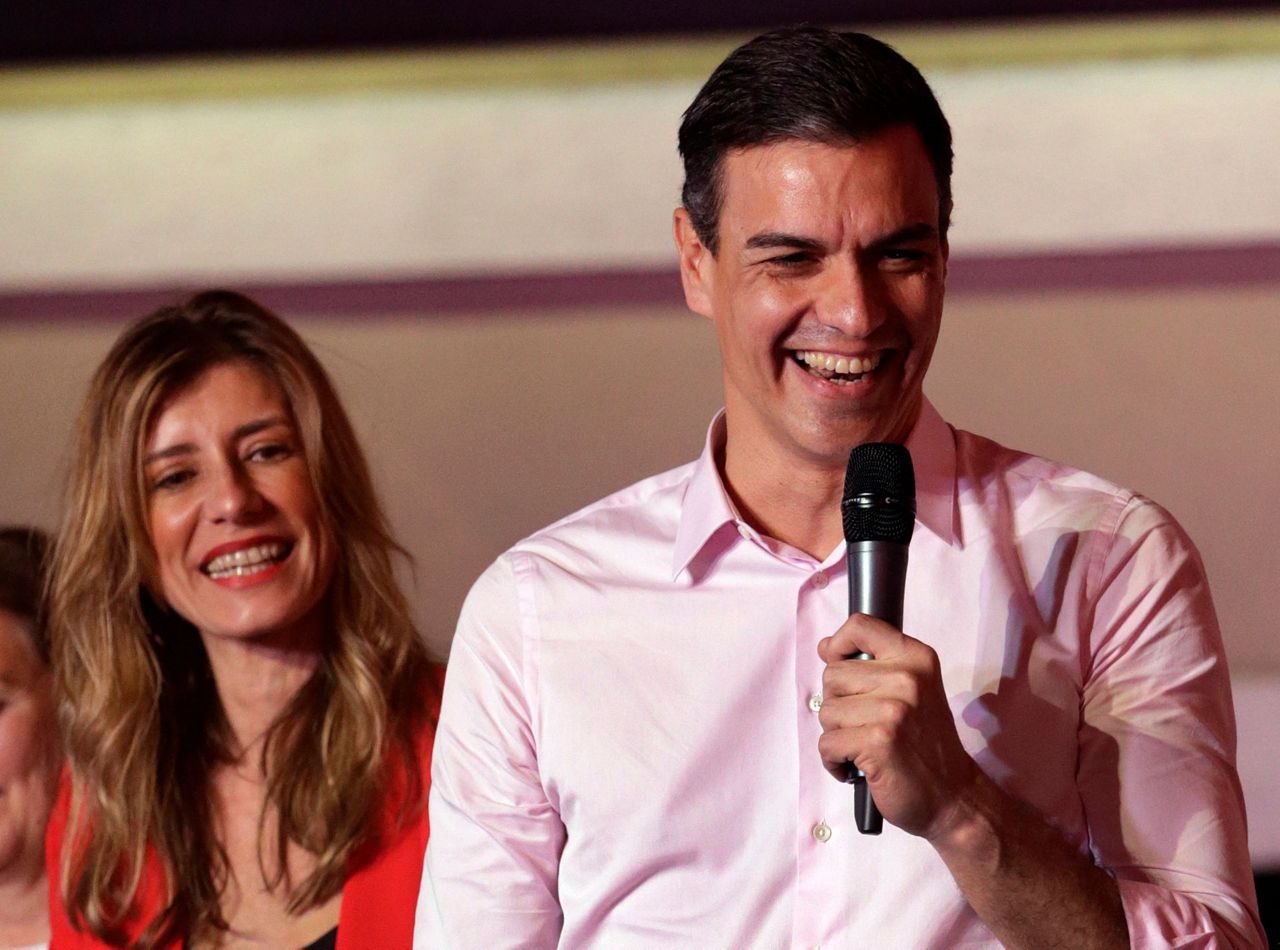 3 of 5
Spanish Prime Minister and Socialist Party candidate Pedro Sanchez speaks to supporters gathered at the party headquarters waiting for results of the general election in Madrid, Sunday, April 28, 2019. Spain's governing Socialists won the country's national election Sunday but will need the backing of smaller parties to stay in power, while a far-right party rode a groundswell of support to enter the lower house of parliament for the first time in four decades, provisional results showed. At left is his wife Maria Begona Gomez. (AP Photo/Andrea Comas) 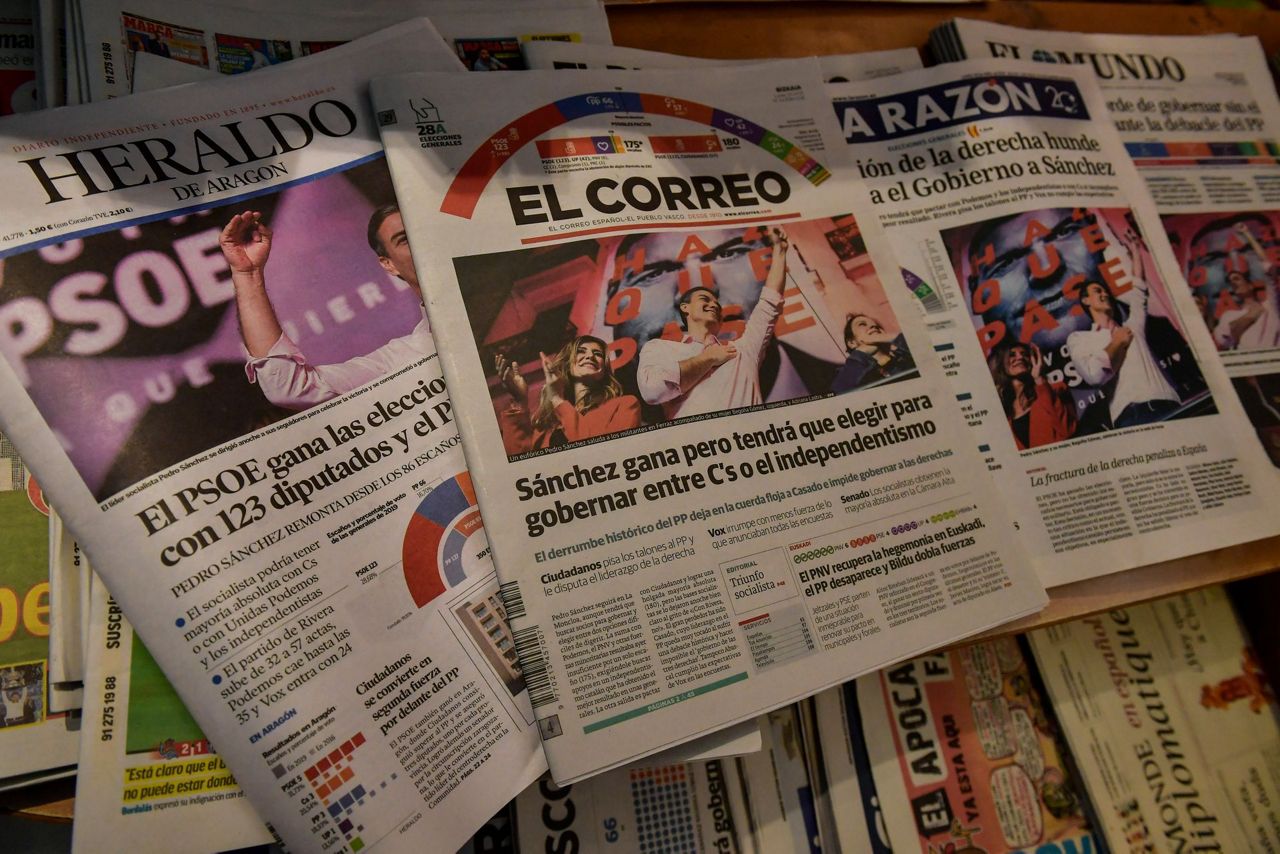 4 of 5
Spanish newspapers in Pamplona, northern Spain, announce the victory of Spain's Prime Minister and candidate of the Spanish Socialist Party, Pedro Sanchez, a day after general elections, Monday, April 29, 2019. The center-left Socialist party won re-election in Sunday's ballot, and will try to form a government.(AP Photo/Alvaro Barrientos) 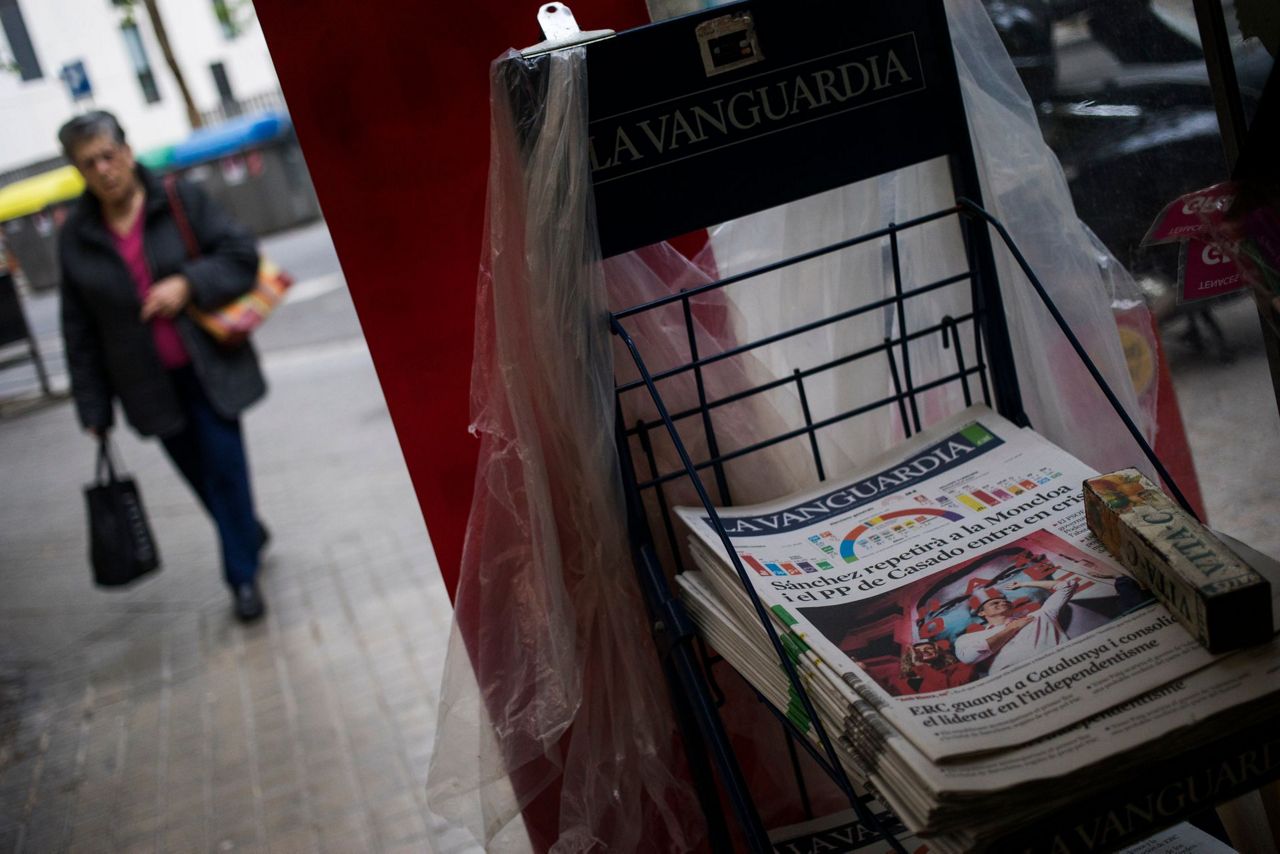 5 of 5
A newspaper carrying the front page of Spain's Prime Minister and Socialist Party leader Pedro Sanchez sit for sale at a newspaper stand in Barcelona, Spain, Monday, April 29, 2019. Spain's governing center-left Socialists won the country's election Sunday but must seek backing from smaller parties to maintain power, while a far-right party rode an unprecedented surge of support to enter the lower house of parliament for the first time in four decades. (AP Photo/Emilio Morenatti)

MADRID (AP) — The Latest on the results of the Spanish general election (all times local):

A senior Socialist party official in Spain has ruled out entering a governing coalition with smaller parties after it won the most votes in the country's latest general election.

José Luis Ábalos said Tuesday that "we will try to achieve support based on political proposals and programs, but not pacts."

The Socialists made significant gains but failed to achieve a governing majority in Spain's third election since 2015. The party won about 29% of the votes and one option is for it to try to rule as a minority government.

Ábalos said the result makes Spain the "most solid social-democracy in Europe" and "an example against the threat of advancing populism and the extreme right. He was referring to Vox, a nationalist ultraconservative party that grabbed about 10% of votes in the general election.

Ábalos put the blame on the rise of the far-right on the two other right-wing political forces, the once-dominant Popular Party and the surging Citizens party. He accused them of trying to assemble "an anti-Socialist coalition with the help of Vox."

The official said the Socialists are not in a rush to form a government and that their immediate focus will be on campaigning for the European Parliament election on May 26, which in Spain coincides with regional and local ballots.

The centrist Citizens party says it wants to lead Spain's political opposition, ruling out entering a governing alliance with the Socialists who won Sunday's general election.

Speaking on the day after the ballot, Citizens spokeswoman Inés Arrimadas has rejected entering any negotiations with the party of the incumbent prime minister, Pedro Sánchez.

In addition to Citizens, two more parties are fighting over leadership of the right wing after falling short of a majority in the parliament's Lower House.

The center-right Citizens obtained 57 seats, more than in the last election three years ago, but still behind its conservative rival in the right wing, the Popular Party, which halved its presence in the Congress of Deputies, from 137 to 66 lawmakers.

The Popular Party, dominant when power in Spain was a matter of only conservatives and Socialists, has acknowledged the bad results but says that it remains the leading opposition force.

Santiago Abascal, the leader of the Vox far-right party that went from zero to 24 deputies, on Monday blamed the right's inability to unseat Sánchez on the Popular Party's poor performance.

The European Union executive says that it is confident that outgoing prime minister Pedro Sánchez "will be able to form a stable pro-European government that will allow Spain to continue to play an important role in the EU."

Spokesman Margaritis Schinas added that the results also show that "a crushing majority of the Spanish population has chosen for clearly pro-European parties."

Spain's third parliamentary election in less than four years has done little to dispel uncertainty over the political future of the eurozone's fourth largest economy.

The center-left Socialist party won re-election in Sunday's ballot, collecting nearly 29% of votes, and will try to form a government. It would be one of only a handful of socialist governments in the European Union.

But with only 123 seats in the 350-seat Congress of Deputies, Spain's parliament, it needs to negotiate the support of smaller rival parties to pass legislation.

Even an alliance with the far-left, anti-austerity party United We Can wouldn't give the Socialists the key number of 176 seats.