The University of Hawaii had planned a further buildout of the makai sideline seats of the Clarence T.C. Ching Athletics Complex, but those plans have been tabled for at least a year due to rising construction costs and a lack of funding. (Spectrum News/Brian McInnis)

HONOLULU — Proposed seating expansion and other upgrades of the University of Hawaii’s Clarence T.C. Ching Athletics Complex once slated for the summer of 2022 have been pushed back at least a year.

UH Athletic Director David Matlin told Spectrum News in an interview this week that steadily rising costs associated with supply chain issues, a lengthy permitting process and lack of funding combined to cause a pause in the multi-year buildout of the makeshift venue at the Manoa Lower Campus.

The 9,000-seat facility will remain as-is for the upcoming 2022 season that begins Aug. 27 against Vanderbilt, one of seven home games on the schedule.

“We’re still planning to move this (next phase) forward, and hopeful that we can do that with a 2023 target expansion,” Matlin said.

While the state Legislature approved $7.2 million for UH Manoa athletics for Fiscal Year 2023 – a restoration of the annual $3.6 million that was provided up until the pandemic, plus an additional $3.6 million – no money was provided specifically for Ching Complex upgrades.

“There is always hope (for future funding),” Matlin said. “But we are very grateful for the support in our operating budget.”

UH’s new home for its football program came together quickly as a playable space in 2021 with about $9.3 million that the university diverted to the emergency project as a result of Aloha Stadium’s sudden moratorium on future events in December 2020 that prevented further use by its primary tenant.

Seating at the Ching Complex, previously strictly a practice field and track venue, roughly doubled to the current 9,000 capacity, with new aluminum bleachers installed on the makai sideline and Diamond Head end zone, as well as about a dozen elevated luxury suites to provide a stopgap environment for the program’s first on-campus games.

UH played the first half of last season sans fans at home until COVID-19 pandemic restrictions were eased. Even when full capacity was allowed again for the last two home games, UH still had vaccination requirements and could not offer food and drink concessions, which amounted to limiting factors as the stands were filled to about half of capacity for Todd Graham’s final games as Rainbow Warriors coach.

But the “Island Day” cerebration of new coach Timmy Chang and the intrasquad spring game at the Ching Complex on April 16 showed the kind of festive atmosphere that could be generated there. The bleacher seating was mostly packed and food trucks and other vendors were on hand to serve the lively crowd milling about the track.

“That was a great dry run for us, because we never really had a football event with concessions (here),” Matlin said. “There was a decent crowd there, too. I think we’ll apply some of those things. We’ll do some things maybe on an ongoing basis, and some things maybe once in a while.”

At the least, UH had hoped to further expand seating to about 12,000 this summer by upgrading the Ewa end zone bleachers to match those on the Diamond Head side. It has also endeavored to import the large video board from the to-be-demolished Aloha Stadium to accompany the smaller new screen UH installed in 2021. UH would have to construct housing for the large screen in a corner of the complex near Les Murakami Stadium.

Those plans are tabled, however, as is a more ambitious plan to build out the makai bleachers to about double their current height and extend them all the way back to the edge of the Duke Kahanamoku Aquatic Complex. 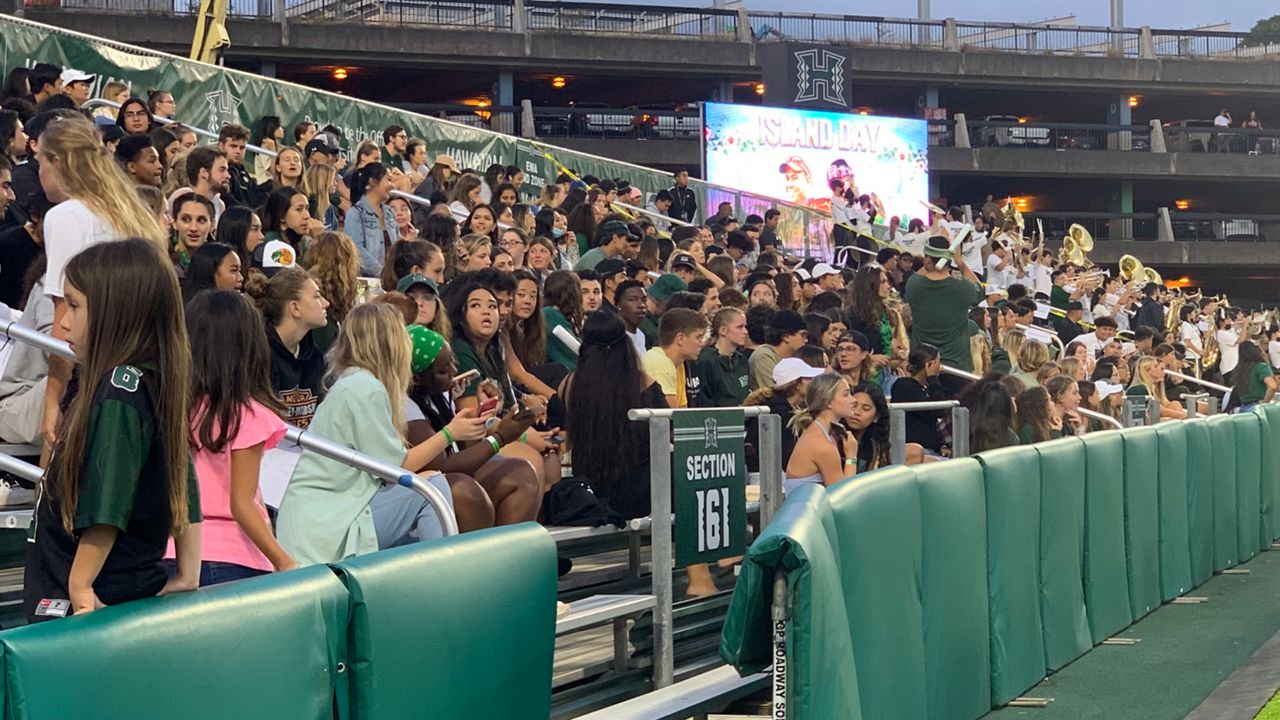 UH students packed the Ewa end zone bleachers at the Clarence T.C. Ching Athletics Complex for the spring game on April 16. Those stands were one target for upgrades that have been pushed back. (Spectrum News/Brian McInnis)

On the upside, Matlin said, an environmental assessment was submitted in early June for what has been called Phase 2, which would expand seating to between 16,000 and 17,000.

Matlin said the cost for that phase was previously estimated at roughly $18 million, but that was before widespread inflation and other rising material costs globally.

Construction costs have risen steadily by the month, he said.

“That’s a fair estimate for what it was initially. But with the (rising) costs, when you start procuring steel … where’s it going to be at that point?” he said.

The athletic director is hopeful that the existing Ching Complex will play to packed crowds, or close to it, in 2022. Season ticket renewal invoices just went out, Matlin said, so he didn’t yet have figures on that.

“I think what Timmy’s done has been really great. I think there’s a lot of excitement and enthusiasm,” Matlin said.” Some local players coming home. Recruiting’s going well. I think there’s some positive anticipation about where the program’s going. So yeah, I’m expecting healthy and robust crowds.”

He remains cognizant that even an upgraded Ching is still not an ideal situation compared to a fully built out venue, like 50,000-seat Aloha Stadium or the proposed 30,000 to 35,000-seat New Aloha Stadium project.

Matlin made it clear that the on-campus facility remains a holdover until the construction of the new stadium is completed. When that will be, however, is anyone’s guess. The NASED stadium Request for Proposals process has stalled for many months.

“The cool thing is, Island Day showed that this is a fun atmosphere,” Matlin said. “So, it’s something that we’re going to build on, make it a fun environment, and look forward for the NASED project to get done and transition to there.”

Meanwhile, UH expects to have its Lower Campus parking structure at close to full availability by September. Renovations to the structure had caused occasional parking shortages for UH athletics events this spring.