KAANAPALI, Hawaii — Photos reveal that Kaanapali Beach in West Maui has almost completely disappeared, and the concrete boardwalk and coconut trees that line the hotel district are falling into the ocean.

Tiare Lawrence, who is from West Maui, shared photos and drone images she took of the erosion with Spectrum News Hawaii.

“The damage has been occurring for decades now,” Lawrence said to Spectrum News. “In 2003, there was massive erosion that resulted in hotels placing thousands of sandbags along the shoreline.”

Lawrence sent Spectrum News Hawaii an article from a 2003 issue of the Honolulu Star-Bulletin, showing 17,000 sandbags had been placed along the shoreline fronting the Kaanapali Alii Resort after receiving an emergency permit from the state.

“This summer the beach experienced accelerated erosion along the shoreline during high tide and south swells coupled with flanking erosion from the existing temporary emergency permitted use of sandbags, sand burritos and plastic burritos,” Lawrence continued.

The Department of Land and Natural Resources said in an email to Spectrum News that they are monitoring the beach erosion but that the buildings are not currently threatened.

“The southern section of Kaanapali is currently experiencing unprecedented levels of erosion. Parts of the beach boardwalk have already collapsed. It does not appear that any buildings are immediately threatened,” Ryan Aguilar, a DLNR communications specialist, said. “The DLNR Office of Conservation and Coastal Lands is actively monitoring this situation. State jurisdiction here is lands makai of the shoreline, while private properties mauka of the shoreline lie in the County’s jurisdiction.”

At the time of publication, DLNR has not answered a follow-up question about whether the sandbags and other temporary structures fronting the hotels were permitted. 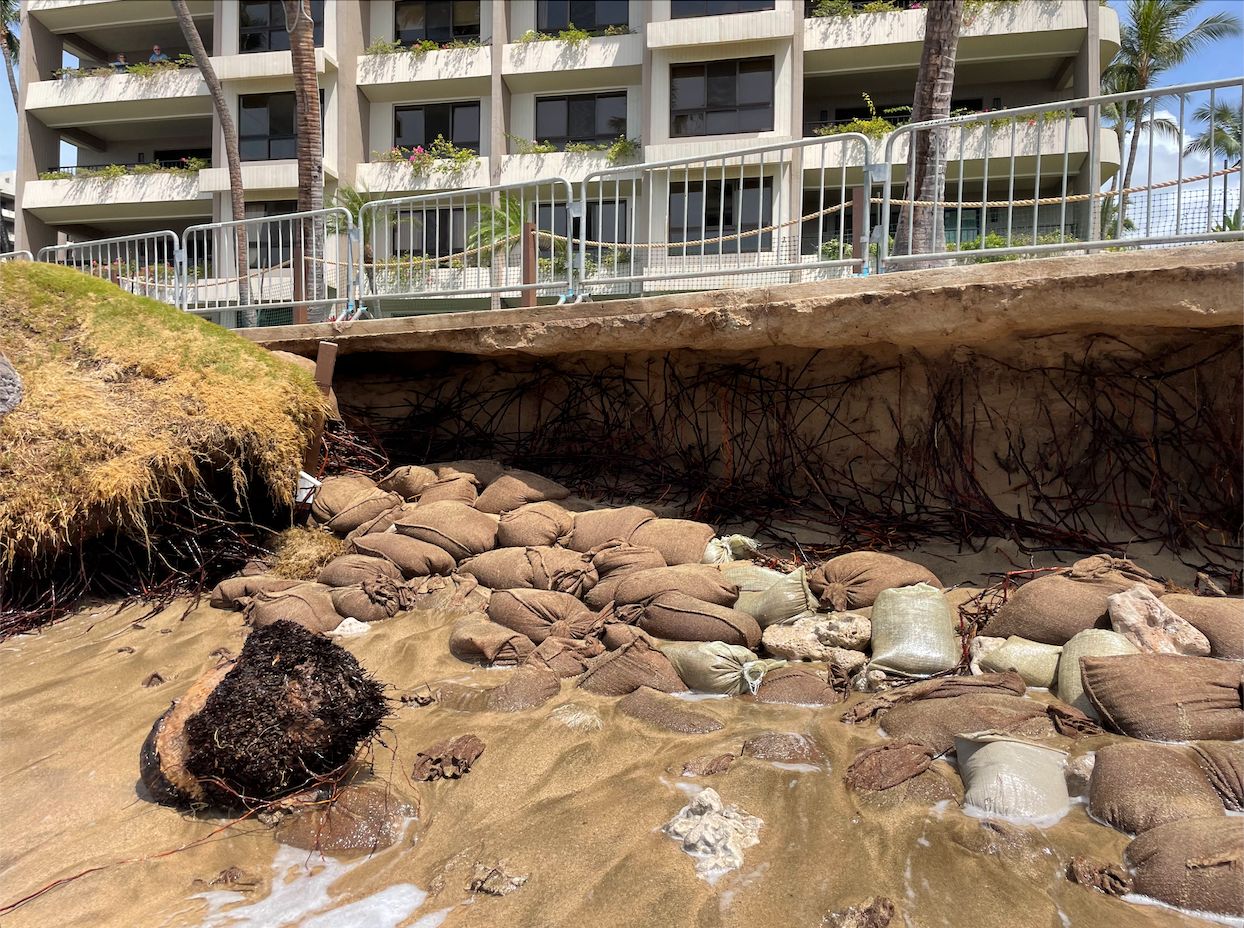 The hotels at Kaanapali Beach were first built in the early 1960s. Before that, it was a sandy coast. Beaches naturally fluctuate, widening and narrowing along with the seasons and hardening the shore with temporary structures or sea walls is known to disrupt the movement of sand, leading to beach loss. A study by the U.S. Geological Survey and University of Hawaii researchers showed that 70% of beaches in Hawaii are experiencing coastal erosion, and that 13 miles of beach have been completely lost.

Lawrence said she grew up gathering, surfing and paddling at Kaanapali Beach.

“This beach has provided subsistence to our family for generations. Unfortunately, the impacts of tourism has hurt my family’s gathering rights, access, and now the loss of a culturally significant beach. The hotels were built on a beach and for decades disrupted the ebb and flow of Mother Nature's way of shifting sand during seasons,” said Lawrence.

Kaanapali Beach is lined by at least seven major hotels and condominiums, with a boardwalk that runs parallel to the sand for the entire length. Most of the recent damage is in front of the Kaanapali Alii Resort, Marriott's Maui Ocean Club and Hyatt Regency Maui Resort and Spa.

Wayne Hedani, who is the President of Kaanapali Operations Association Inc., which represents the aforementioned hotels and other hotels and condominiums along the shore, said to Spectrum News in an email that "it is true that we are incurring significant erosion presently due to strong storm wave systems."

"The erosion has been more severe than I have witnessed over the last 49 years," said Hedani, who has worked in Kaanapali since 1973. "Erosion has currently undermined and collapsed the walkway at the Kaanapali Alii and affected the beachfront of the Hyatt Regency, Marriott Maui Ocean Club and Hyatt Residence Club as well."

He said the beachwalk, which spans 3 miles of public beach access, is privately owned and maintained, and open to the public. 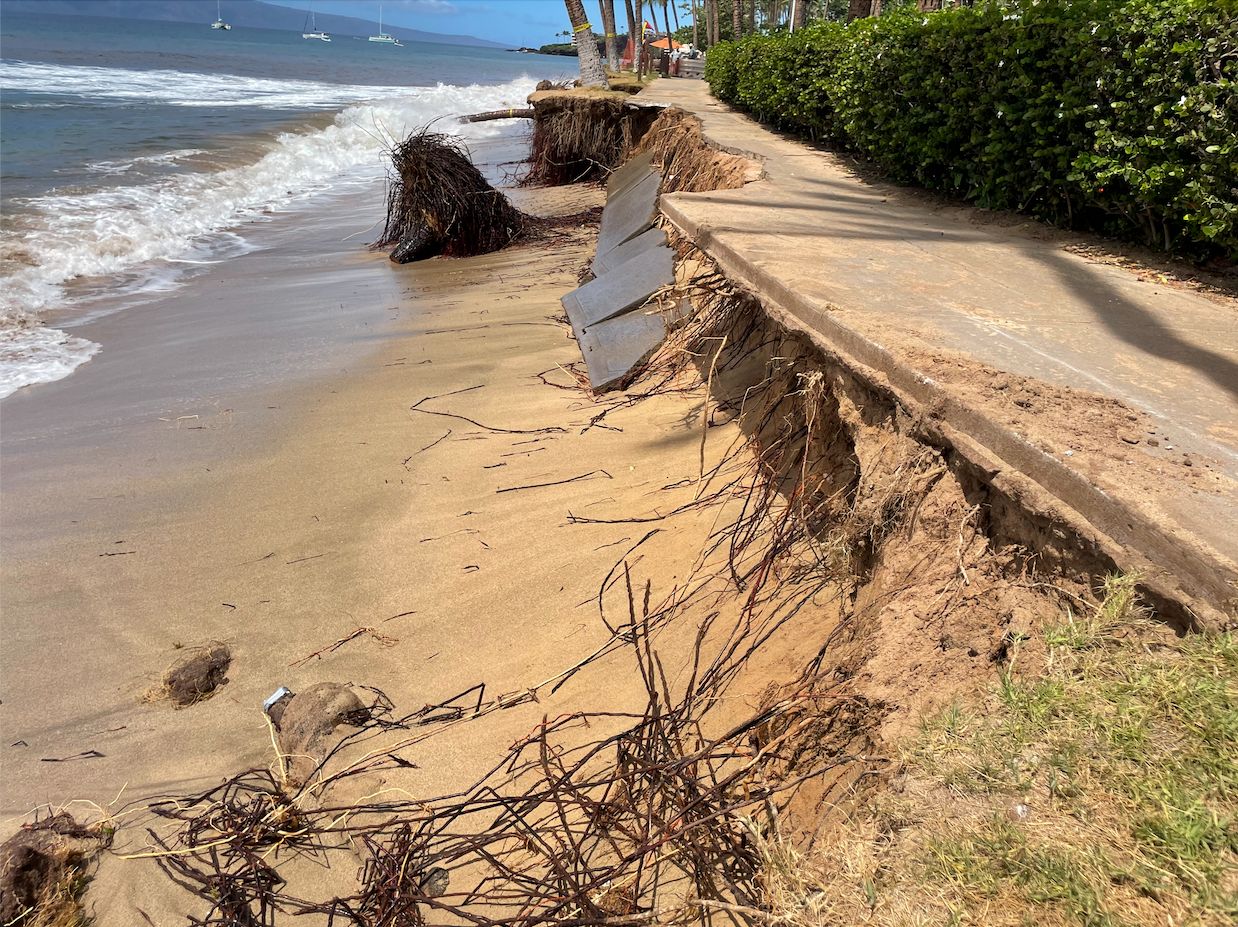 The collapsed beachwalk at Kaanapali. (Photo courtesy of Tiare Lawrence)

Lawrence also expressed concern about the environmental degradation occurring because of erosion. In her photos, the water looks muddy.

“The ocean quality in front of Kaanapali Alii is an environmental disaster. Hotels used dirt fill to grow grass and extend its lawn. That dirt fill was placed over sand and is now in the ocean smothering the reef,” said Lawrence.

State officials and the Kaanapali Operations Association have been working on a beach restoration projection since at least 2020, which would move 75,000 cubic yards of sand from the ocean and put it on the shore to widen it to align with the beach’s width in the 1980s. However, the local community has said they will fight the project, citing concerns about how dredging the sand will impact the nearshore environment, fishing, lifeguard services, cultural practices and canoe racing.

“An Environmental Impact Statement has been published for beach nourishment in the area using off-shore sand sources,” said Aguilar, the DLNR communications specialist. “OCCL plans to present the beach nourishment proposal to the Board of Land and Natural Resources after the EIS is signed, and to tie beach nourishment with actions on the private properties to develop a more adaptable, sustainable shoreline.”

Hedani with the Kaanapali Operations Association said once the EIS is approved that there are another 16 permits that will need to be reviewed and approved to proceed with the project.

"KOA is a financial contributor of $5.05 million to the project cost of $10.1 million," said Hedani.

He emphasized that the hotel district generates more than $150 million in tax revenue, and that 1.3% statewide hotel room tax is meant to cover projects to protect natural resources.

Hedani also said that the erosion happening now would have been prevented if the project had already been approved.

"The same activists who decry the current eroded condition of the beach have also vowed to stop our beach restoration and berm enhancement project at each step of the 16 permits still needed through legal challenges," said Hedani. "People who care about the ocean environment and beaches should be supporting this project not opposing it. Instead of protecting our reefs they are destroying it by tying our hands and allowing sedimentation from erosion to take its course."

The earliest the beach restoration project will begin is the fall of 2024, according to Hedani.

Instead of adding sand to the beach, Lawrence said the best solution would be to implement a managed retreat policy, which would move buildings inland and provide a long-term solution to sea-level rise.

Chip Fletcher, the Associate Dean for Academic Affairs at the School of Ocean and Earth Science and Technology at the University of Hawaii at Manoa, who spoke to Spectrum News Hawaii last year for a story about the Kaanapali Beach restoration project said eventually the hotels that line this beach are doomed. Beach replenishment will only last about 20 years.

Still, Fletcher said there’s a lot to figure out in order to implement managed retreat, such as where the buildings will be moved, who will pay, and how the beach will be restored. He suggested the land behind the hotels, which is currently a golf course, is an inland location where buildings could be relocated.

Throughout Hawaii, beach erosion is increasingly becoming an issue. On Oahu’s north shore, a home fell onto the beach in February. About 20 beachfront homes in the same area are illegally placing sandbags and geotextile curtains on the public beach in an effort to save them, but the temporary structures are ripping apart as waves crash on them and litter the ocean.

Michael Cain, who is the administrator of the OCCL, said in a video released by the DLNR that the City & County of Honolulu’s Department of Planning and Permitting is working on a program that would allow the north shore property owners to relocate inland. He said land still needs to be assessed to determine what would be appropriate for new developmental rights, and financial resources would be needed to restore the dune ecosystem once the beachfront homes were removed.

EDITOR'S NOTE: This story has been updated with statements from Wayne Hedani, president of Kaanapali Operations Association Inc. (Sept. 29, 2022)