FORT WORTH, Texas — On a recent sunny and humid Saturday morning, city leaders gathered on a bridge on Main Street just west of downtown for a ribbon-cutting ceremony. A mariachi band provided the soundtrack to back-patting and general revelry. While most large cities may not celebrate a small bridge that took more than seven years to complete like it’s a Super Bowl victory, nothing about the Trinity River Central City Uptown Panther Island District Vision has been normal by development standards.

The words “Panther Island” elicit different responses among Fort Worth residents. Since the Trinity River Vision was pitched more than a decade ago as a flood control project, the TRVA has faced a funding shortage, accusations of cronyism and dealt with countless delays. Now, the Tarrant Area Regional Water District, the body that oversees the project, is being sued by its former general manager.

Original cost estimates in 2006 for the project were $435 million. A consulting firm now estimates the project will likely cost nearly $1.2 billion to complete — roughly three times the original estimate.

So far, local entities have contributed over $265 million to the project, while the state and federal governments have added about $60 million.

Critics of the TRVA have long decried the project as a development boondoggle disguised as flood control. Creating a physical island, observers point out, has been costly, offers little relief in terms of flooding and has taken years longer than expected.

In 2014, the Texas Department of Construction began building the three bridges, which currently span dry land. At the time, officials said the bridges would be completed by 2018. As of now, only two of the three have been completed.

Officials have long said that it was cheaper and easier to build the bridges over dry land, and that the federal government would pay for the channel construction because it’s a flood control project.

But even once the final bridge opens to traffic later this year, the Panther Island project will be far from complete. Most notably — and noticeably — digging has not begun on the river channel that would run under the new bridges.

Without federal funding, the bypass channel, or canal, over which the bridges pass will be dry, and the bridges are likely to provide no real function for years to come.

In 2016, the U.S. Congress authorized the funds for the project, but the money was never appropriated nor actually sent to Fort Worth.

U.S. Rep. Kay Granger, R-Fort Worth, who has led the push for federal funding, initially planned to funnel funds to the project through earmarks in congressional appropriations bills, the Star-Telegram previously reported.

Then, because of a Trump-era policy change, appropriations earmarks were banned, which meant that projects had to be vetted and approved by the White House. The Trump administration never gave the green light to the Panther Island/Central City project, pointing to the project’s lack of a comprehensive cost-benefit study and labeling it “not policy compliant.”

Will this project actually guard against flooding?

At the heart of the debate over the TRVA is the role of the project as it relates to flood control. The island’s channel would connect the Clear and West forks of the Trinity River and then connect the ends of a U-shaped bend in the river, as well. The new channel would effectively create two islands, together called Panther Island.

Those spearheading the project have long touted the canal’s functional purpose — to serve as the main stormwater arterials for the City of Fort Worth and allow for the removal of outdated levees, replacing them with better flood protection.

As officials wait for money to trickle in, the TRVA is funding current operations, like basic administration costs and some environmental clean-up and demolition work from the $6 million in tax-increment finance district funding it received in July. An attorney for the project said she expects that funding to last through the fall, after which TRVA will draw its funding from issuing commercial paper, a short-term debt instrument.

The attorney for the water district pointed out that TRVA is maintaining functions at a level that keeps them “eligible for federal funding.” Environmental clean-up work has been ongoing.

According to the Panther Island project’s executive director J.D. Granger, whose mother is the aforementioned Kay Granger, funding for the Panther Island Riverwalk is coming from investors and developers who are paying the Tarrant Regional Water District the amount they would essentially pay to mitigate the stormwater runoff they would create. On the amount of time it’s taken to see things go vertical, Granger cites, in part, the need to clean up the “environmental hot mess” that the formerly industrial property used to be, previously filled with hazardous chemicals like lead and ammonia.

Two years ago, the Panther Island project was reviewed by a third-party advisory firm, Riveron. The report cited myriad problems within the project’s financial management, governance, and transparency and recommended significant changes.

The TRV’s embattled director J.D. Granger has faced criticism for a recent social media activity. On his Facebook account, he posted a picture of two people on the White Settlement bridge, with the caption:

“This bridge opening is just another expected milestone towards the completion of a project that makes the old guard in Fort Worth uncomfortable. … And at the finish line everyone will think it was easy and take all the credit.”

On his way out the door, former Water District GM Jim Oliver unleashed an email tirade that at least one water board member called “inappropriate.” In emails obtained by The Fort Worth Report through an open records request, Oliver defended Granger’s social media post and heaped criticism on former mayor and current candidate for county judge, Betsy Price.“Before you condemn JD for speaking his mind, let’s review some facts that influence his outlook,” Oliver wrote in a May 25 email to King; board members Marty Leonard, Jim Lane and James Hill; then-deputy GM Dan Buhman, and attorney Lee Christie. 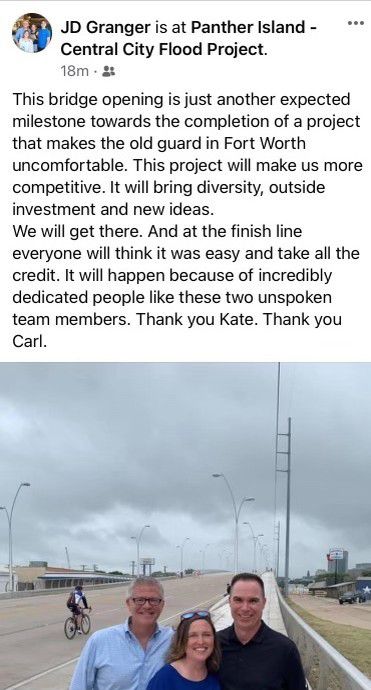 “When the project was conceived, despite dozens of community meetings and a citizens steering committee, the project was dubbed ‘fantasy island’ by many so-called community leaders. (I could name names.) Some years later, the local part of the project steamed along on time and under budget, yet Mayor (Betsy) Price publicly called for an audit (which implies suspected financial and management improprieties). She personally called (former water board president) Jack (Stevens) and told him that JD and I should be fired. As a result, her negative comments…were used as justification by the OMB (Office of Budget and Management) to kill USACE (Army Corps of Engineers) recommended funding for the project for the next few years,” Oliver wrote.

In the emails, Oliver added that Price’s “outburst” ultimately resulted in the transferring of the marketing of Panther Island for development from the water district to the city.

“I have yet to find anything the city has done in this area,” Oliver wrote.

“Next, the mayor went to D.C., supposedly to meet with White House officials, came back, called the press and proclaimed that she had secured $250 million for the project. To date, the money has never materialized. Yet no one, not community leaders or the press, have ever asked her what happened. However, they continually blame JD and TRWD for the last few years of funding failure.”

Before Oliver retired, former board president Jack Stevens had directed staff to exempt Oliver and another employee from the district’s paid leave policy. This exemption could have resulted in Oliver being paid about an additional year’s salary had it not been revoked by the board.

Oliver is now suing his former employers for that payment. In an interview with The Fort Worth Report, his attorney Jason Smith asserted that his client is still owned the sum, totaling roughly $300,000.

There is reason for optimism

A couple of key changes are giving hope to Panther Island/Central City officials.

A Tarrant County administrator said the newfound optimism comes down to three primary shifts: the new Biden administration (which he hopes will look more favorably on the Fort Worth project), the resurrection of appropriations earmarks and the bipartisan push for a large federal infrastructure bill.

One thing that hasn’t changed is that the project still does not have a comprehensive cost-benefit study. The Star-Telegram previously reported that this type of study is typically done before U.S. Congress authorizes funding for a project — which is a step that the Panther Island/Central City project has already moved past, with the aid of a 2014 University of North Texas study.

Federal funding would mean that workers could begin on the new channel — first with final planning and then actual digging and construction.

Even after federal funding comes through, it would likely be another eight to 10 years until the channel was actually completed. That means that the channel would be finished — and Panther Island would actually become a full island — by 2030 at the earliest.