Piles of old wind blades are stacked on top of each other in a field owned by Global Fiberglass Solutions in Sweetwater, Texas. (Spectrum News/Ashley McElroy)

What should Texas do with its old wind turbine blades?

The blade stands as a symbol of the importance of the wind energy industry to this city on the edge of the Texas plains. Texas produces more wind energy than any other state in the country, much of it here off of Interstate 20. If Texas was a country, it would rank fifth among the world’s wind energy producers.

Sweetwater’s wind energy industry started in the late 1990s and has fueled the local economy with turbine-related jobs and a boom for landowners. Today, President Joe Biden’s call for investing in America’s clean energy resources, including wind, fuels hopes of more opportunities to come.

But for all the benefits the wind turbines have brought to Sweetwater, a critical question remains: What to do with the worn-out wind turbine blades when they are replaced? 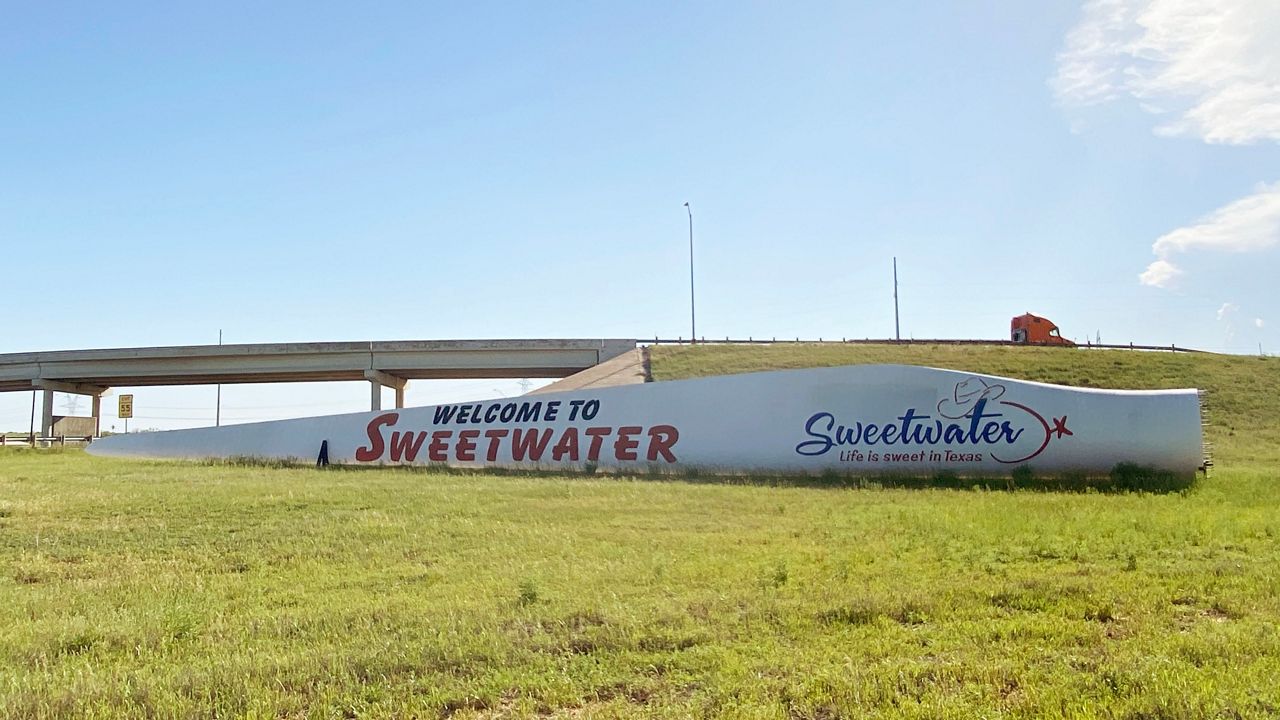 Sweetwater prides itself on its energy production as shown with its welcome sign along the Interstate 20. (Spectrum News/Ashley McElroy)

Wind turbine blades last an average of about 25 to 30 years. When they are replaced, the old blades become a challenge, from transporting them out of the field to finding a place to store the blades, which can be longer than a Boeing 747 wing.

Finding an environmentally friendly and economical way to dispose of the blades will become a growing problem. In the U.S. alone, there are an estimated 54,000 turbines in operation at the moment with 164,000 blades, according to Global Fiberglass Solutions. Over the next two years, an estimated 35,000 of those blades will be decommissioned and need somewhere to go.

Last year G.E. Renewable Energy, a division of General Electric, announced that it would begin recycling the blades by shredding them into raw material for use in cement manufacturing. In the Netherlands, one city turned the old blades into a playground. Cork, Ireland, is experimenting with using retired blades to construct bridges.

Still, thousands of old blades have been cut into pieces and laid to rest in landfills, where the fiber-reinforced plastic will never break down. A municipal landfill outside of Casper, Wyo., another wind energy hub in the U.S., has been the resting place for more than 1,120 blades, and the city expects to receive another 250 in the coming year.

The U.S. currently has very little regulation regarding the disposal of wind turbine blades. Adding to the problem is the fact that blades have gotten longer during the last 30 years, as wind technology has advanced, creating longer blades and shorter turbine towers for better energy production.

In Sweetwater, two “graveyards” for retired turbine blades have appeared in recent years. Here, hundreds of the football field-sized blades have been cut into thirds and laid out in pastures. The sawed edges of the blades stacked on top of each other and spread out over a 10-acre field can be seen just off Highway 70, south of Sweetwater. Another blade graveyard stretches across an industrial field across from the city’s only graveyard off of Interstate 20. 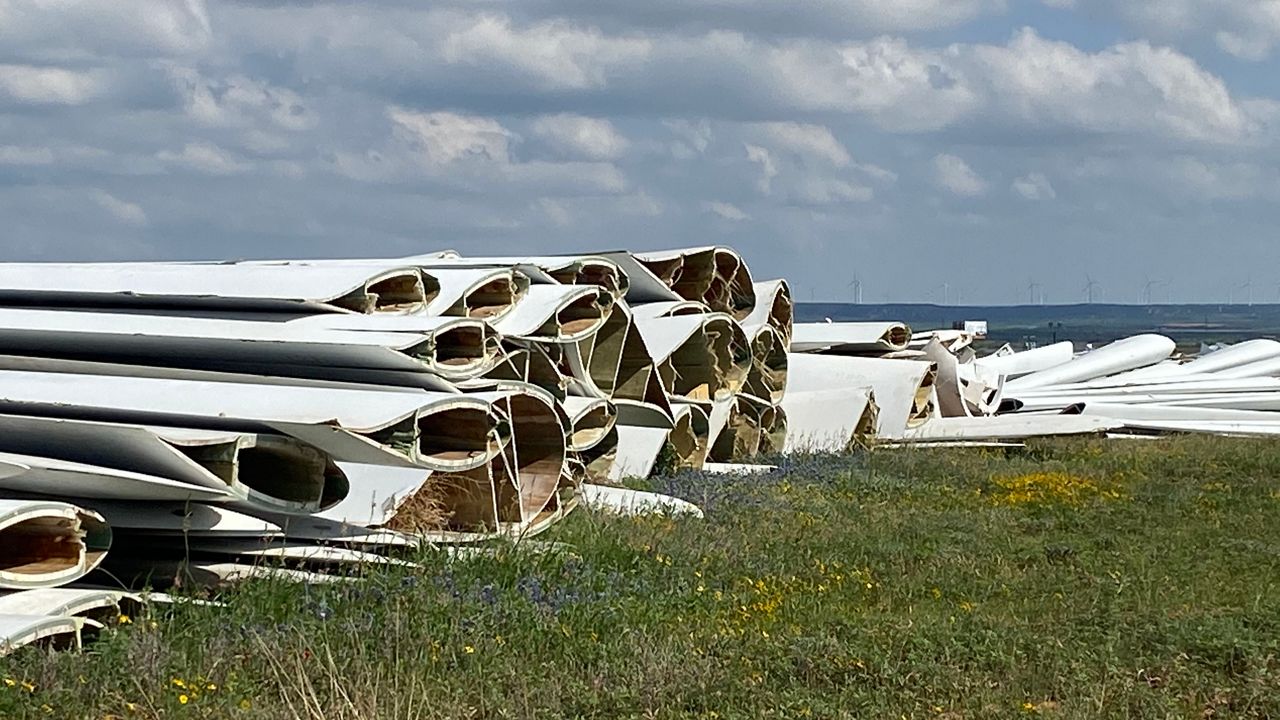 Thousands of blades are piled in a graveyard that stretches across an industrial field. (Spectrum News/Ashley McElroy)

It’s a sight Sweetwater residents have grown as accustomed to as the hundreds of massive wind turbines that operate day and night on the sprawling wind farms south of the city’s quiet center.

Global Fiberglass Solutions, a Washington-based company, owns the two blade graveyards in Sweetwater. The company, which did not return requests for interviews, has said it will recycle the blades into construction-grade fiberglass pellets and panels.

Wind energy creates substantially less pollution than energy generated by fossil fuels such as coal and natural gas, another important industry in Texas’ economy. While wind energy production has brought financial benefits to Texas and many see potential in furthering the development of the industry, it has not stopped it from irking proponents of the state’s huge oil and gas industry.

In February, when Texas was hit with the worst winter storm in a decade and the state’s power grid failed, Gov. Greg Abbott was quick to falsely accuse the wind production industry of being a key cause of the rolling blackouts across the state. According to the state’s power grid, wind power contributes about 20% of the total power generation while coal and natural gas-powered generation account for almost 70% and nuclear about 10%.

Figuring out a way to dispose of or repurpose decommissioned wind blades will be important for Texas if the state continues to develop its substantial share of the industry.

“I joke with my husband that we have one graveyard for relatives but two graveyards for the blades,” said Abigail McLaughlin, who works at a local hotel. Behind the hotel’s front desk, wallpaper depicts the local landscape of wind turbines along the raised plateau. 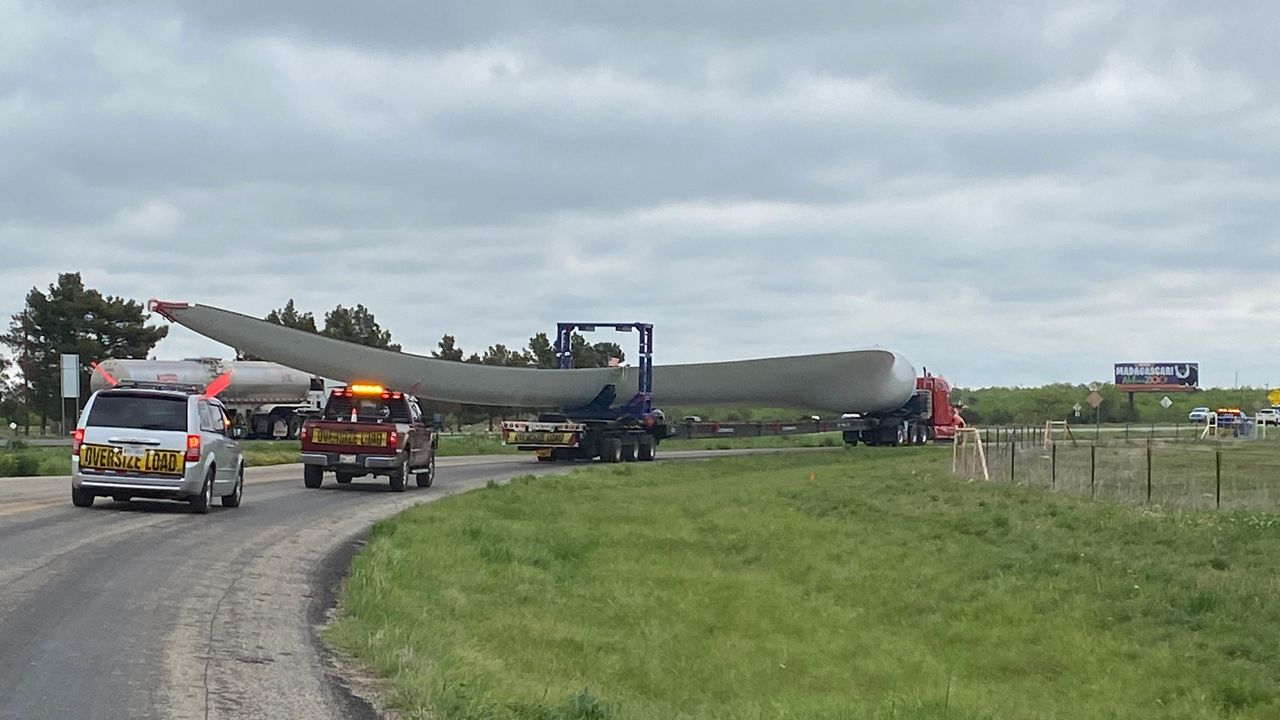