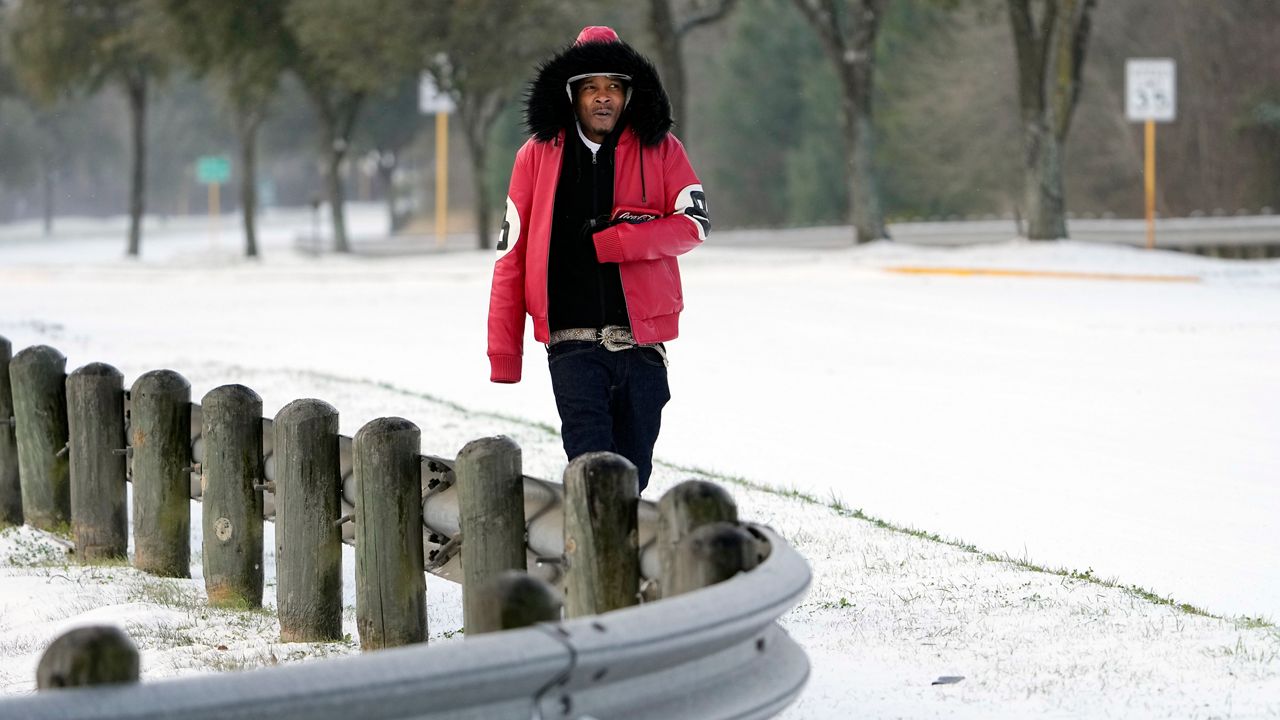 A man walks on the snow-covered road during the February Texas winter storm. (AP Image/File)

AUSTIN, Texas — The after effects of Texas’s historic snowstorm are now revealing systemic inequities in renters' rights to repairs.

State and local agencies are reporting a record number of calls from tenants still living with major storm damages. Families across the state are dealing with delays in repairs, displacement and unsafe living conditions following the nearly week-long freeze in February.


Nonprofit groups helping renters say the bulk of their clients are minorities who are already disproportionately impacted by the pandemic.

The two women walked door-to-door at an East Austin apartment complex where dozens of residents were in need of repairs.

“They’re telling her to abandon the property, but she also just paid for rent yesterday,” Praxis said.

She talked with a Spanish-speaking woman living at the complex and translated what the woman said. The woman let Spectrum News 1 into her home, but did not want to go on camera, for fear her landlord would retaliate for talking to the media.

The woman walked through her apartment, pointing out electrical problems and water damage from the snowstorm.

“They have to be going back to the breaker box to turn their power back on,” Rodriguez said.

Making house calls was not a common practice for the two advocates. Since the pandemic, they deal with most complaints over the phone. The complex in question had 12 active cases with the Austin Code Department for problems related to storm damage.

“It’s been an emergency and like crisis situation,” Rodriguez said. “Usually, we’re not going out to properties but because we received so many complaints and so many people from the same property.”

Since the storm, the Austin Tenant Council has had about a 30% increase in calls about storm damage. Agencies statewide have seen similar spikes in numbers.

Sandy Rollins, president of The Texas Tenants’ Union, says they get about 150 calls a day, and most of those calls, again, are coming from disenfranchised renters.

“It’s put people in a situation of teetering on the edge of homelessness,” Rollins said in a Zoom interview.

An Economic Policy Institute analysis of 2020 state unemployment rates found Black and Hispanic unemployment was 2%-3% higher than white Texans. Rollins says this wage gap is one of the many reasons BIPOC renters in Texas are experiencing storm damage issues more than their white counterparts.

Tenant rights advocates say the laws in Texas highly favor landlords and there is a lack of oversight and protection for tenants. Texas Apartment Association Spokesperson told Spectrum News 1 it has more to do with a shortage in labor and materials.

In a written statement, the lobbying group’s vice president of government affairs said:

“The overwhelming majority of rental properties that had water pipes burst and other damage have been able to restore service and complete repairs. However, in some cases, rental property owners are facing the same challenges as home owners and other businesses who are not able to get repairs completed due to a lack of labor, materials and other factors.”

The property management group of the apartments Praxis and Rodriguez were visiting also blame the issue on lack of licensed contractors in the state.

In an email, the regional supervisor said:

“In regards to the timing of repairs, we are working as fast as possible given the constraints that we face in labor and material shortages. We have also been in communication with all affected residents and have explained to them what their options are.”

This is why housing advocates and nonprofit groups are having to step in and pick up the pieces for tenants who can’t get help from their landlords and don’t have the finances or the resources to do so themselves.

There are numerous state and city disaster relief funds available for rental assistance and storm damage repairs. If you have been affected by storm damages, you can also apply for funding through FEMA.