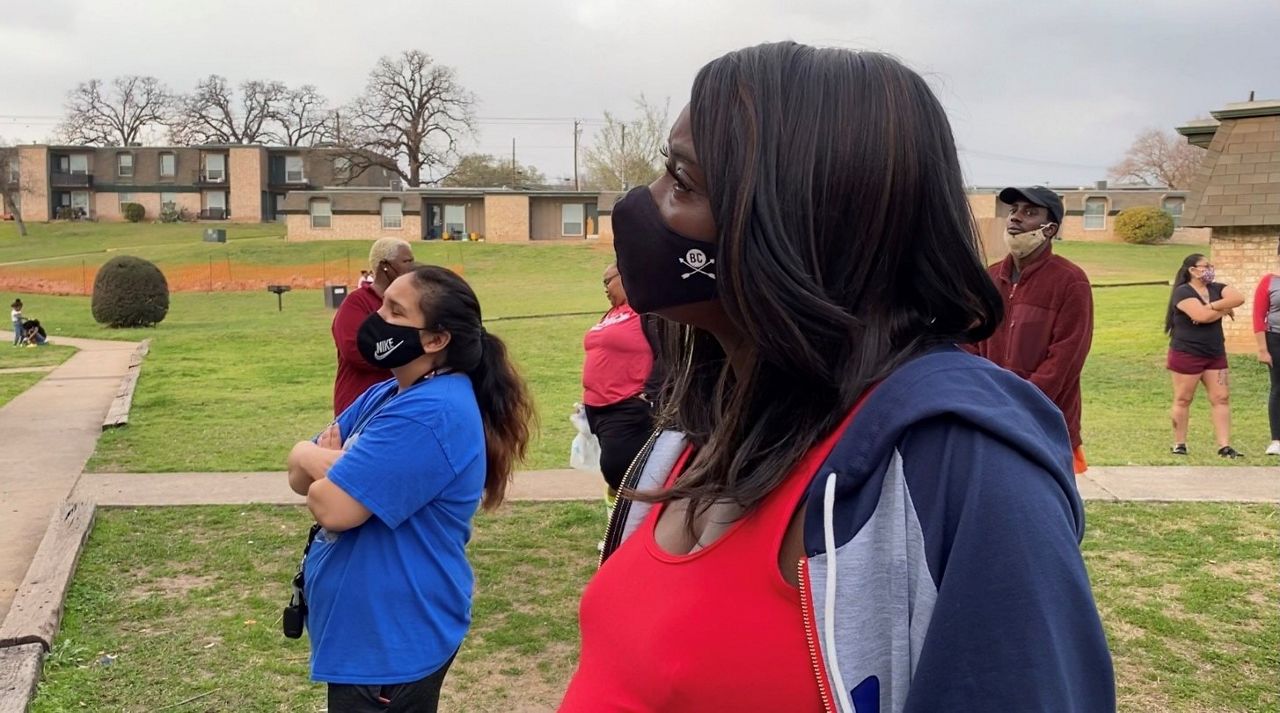 
Families at Mount Carmel Apartments have been without hot water, hot food and heat for more than 30 days. Nonprofits and city leaders finally stepped in to help, but many residents are asking, why did it take so long?

Taniquewa Brewster’s balcony is normally a place of peace. She sits on her wooden chair on her second floor apartment looking out at the 12-acre property, waving to neighbors and watching the hustle and bustle of her little community. 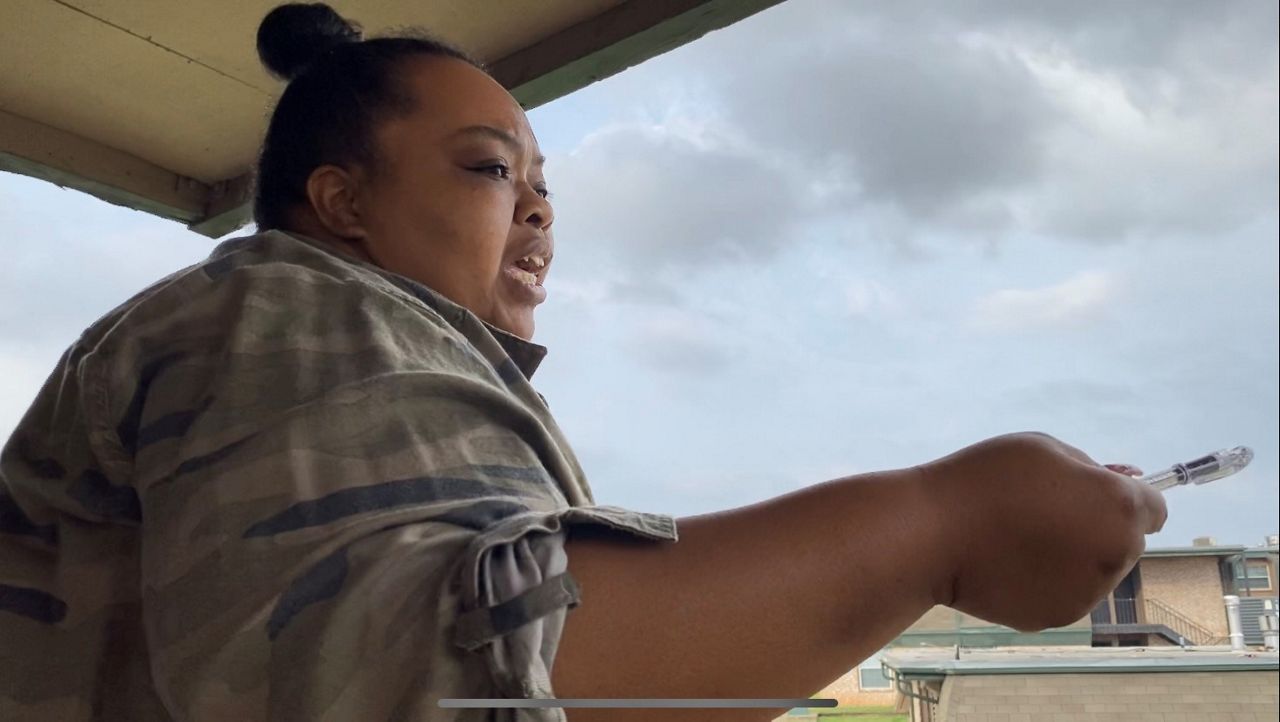 “You catch me here, most the days,” she said, laughing. “It lets me see everything, and be a part of my community.”

Now, the mother of five is using her patio as a place to empower her community, as she stands on her balcony and passionately yells out to the crowd of at least 20 neighbors. She held a private meeting with all the tenants at Mount Carmel Apartments so they could work together to deal with their gas problem.

“We can’t lean on anybody but each other,” Brewster said.

Beatrice Torres and Shakita Plair are two of those neighbors who came out to support Brewster’s cause.

They both have children. Torres just moved here from another apartment seven months ago. Plair has lived at Mount Carmel for nearly nine years.

“As you can see, we’re coming out as a community, we’re all trying, we’re all talking to each other, one another,” Torres said.

“We’re not trying to fight, but we’re gonna do what’s right for us and what’s fair,” Plair said.

This all started on February 20, just days after losing power during the Texas snowstorm. A Mount Carmel resident reported a strange smell. Texas Gas Service crews responded to the scene. They found a leak and immediately turned off the gas and it hasn’t been back on since then.

“Even after our lights came back on, we were in the dark about our gas,” Brewster said.

So were city leaders.

Austin City Council member Natasha Harper-Madison represents East Austin. She grew up there and doesn’t live far from Mount Carmel Apartments, but she says it took 10 days for her to find out about the gas outage.

“Shouldn’t this have triggered something?” she asked. “This is a multi-family property that has children, disabled people, elderly people. I think after multiple days it should trigger something, somewhere.”

Harper-Madison is now working with property management to get the residents accommodations and answers.  The property owners provided portable showers and laundry, an electric skillet and, with funding from nonprofits, hotel rooms.

Brewster and other neighbors told Spectrum News 1 the hotels were too small and unclean.

“It was only one bed and a couch. That’s five kids and me, you know, so that’s ... it was unacceptable,” Plair said.

Brewster still boils water on an electric cooktop she purchased herself to wash dishes and clean the house. Now they have to use tickets to get hot meals from a makeshift food truck parked outside the leasing office, which normally serves hamburgers or fried chicken sandwiches and other, similar items.

“What they want to do is they want to Band-Aid the issue, is what I keep saying,” Delgado said. “Our residents should not be in this condition at all.”

While the property owner is ultimately responsible for fixing the repairs, there are a lot of agencies involved in overseeing the complex.

First, Mount Carmel is a Section 8 property, which means it gets federal dollars from the Department of Housing and Urban Development. Eureka Multifamily Group manages the property and receives funding from HUD for low-income vouchers.

The Southwest Housing Compliance Corporation works with HUD to monitor the property at a city level. Next, because the property has a gas line, Texas Gas Services conducts inspection and responds to reports of problems that require them to turn the main gas line off. However, what’s unique about Mount Carmel is that it’s responsible for distributing its own gas, so The Railroad Commission of Texas is responsible for checking up on property to ensure the gas line is working properly. And lastly, the Austin Code Department responds to any complaints about building code violations, of which the property currently has two - not having hot water or heat.

There are a lot of cooks in the kitchen, which tenants say makes getting answers difficult.

“We’re hearing it’s this person’s fault, it’s that person, it’s private-owned, this is city-owned, and this is a state issue,” Brewster said.

While all of these agencies play a role in overseeing this property, city leaders say clearly that did not happen.

“I think we failed this community and I’m doing everything in my power to get it right,” Harper-Madison said.

Delgado says this is nothing new for Black and brown communities.

“We are highlighting what is happening here in East Austin, this not a new story,” she said. “This property is worth fighting for and to keep the residents from being displaced.”

Construction crews are finally on site replacing the entire gas line, but under state and city laws residents cannot be on the property during construction, forcing them to relocate.

Mount Carmel residents sent me this letter from property management telling them they will need to relocate during construction, under city and state laws. The property owners will pay for hotels, but residents tell me they are unsure of when or where they will have to go. #nogas https://t.co/QnzlIcJvKl pic.twitter.com/jzSxQGwuHb

Even when repairs are completed in about three months, the property still has to pass a city inspection and then a Texas Gas Service inspection before families can move back in - and there’s no telling how long that will take.

The property owners informed tenants they will be paying for temporary housing, but tenants say they don’t know when or where they will end up.

“Have some compassion, that’s a big thing, compassion does go a long way, especially in this time,” Brewster said.

In an email, a HUD spokesperson told Spectrum News 1 the last time Mount Carmel was inspected was in 2016.

The Railroad Commission of Texas has gas distributors, such as Mount Carmel, conduct a leak detection survey every two years. When we asked if the owners had they completed that survey, a spokesperson said they would be coming out to do an inspection soon. The Texas Gas Service public information officer says this gas outage had nothing to do with the storm, but HUD and the property owner claim that it was storm-related.