In the study of 2,581 patients from 18 European hospitals, the patient-reported prevalence of olfactory dysfunction was 85.9% in mild cases of COVID-19, 4.5% in moderate cases, and 6.9% in severe-to-critical cases. The average duration of olfactory dysfunction reported by patients was 21.6 days, but nearly one-quarter of affected patients reported that they did not recover their sense of smell 60 days after losing it.

The medical terms anosmia, hyposmia, parosmia, and phantosmia have all been floated online by those with or recovering from COVID-19. Each term describes a different sensory disorder, with the majority of those with COVID-19 describing their experience as anosmia. The disorder is closely linked to ageusia, a total loss of taste. Those with altered or distorted taste loss may be dealing with hypogeusia, or dysgeusia. 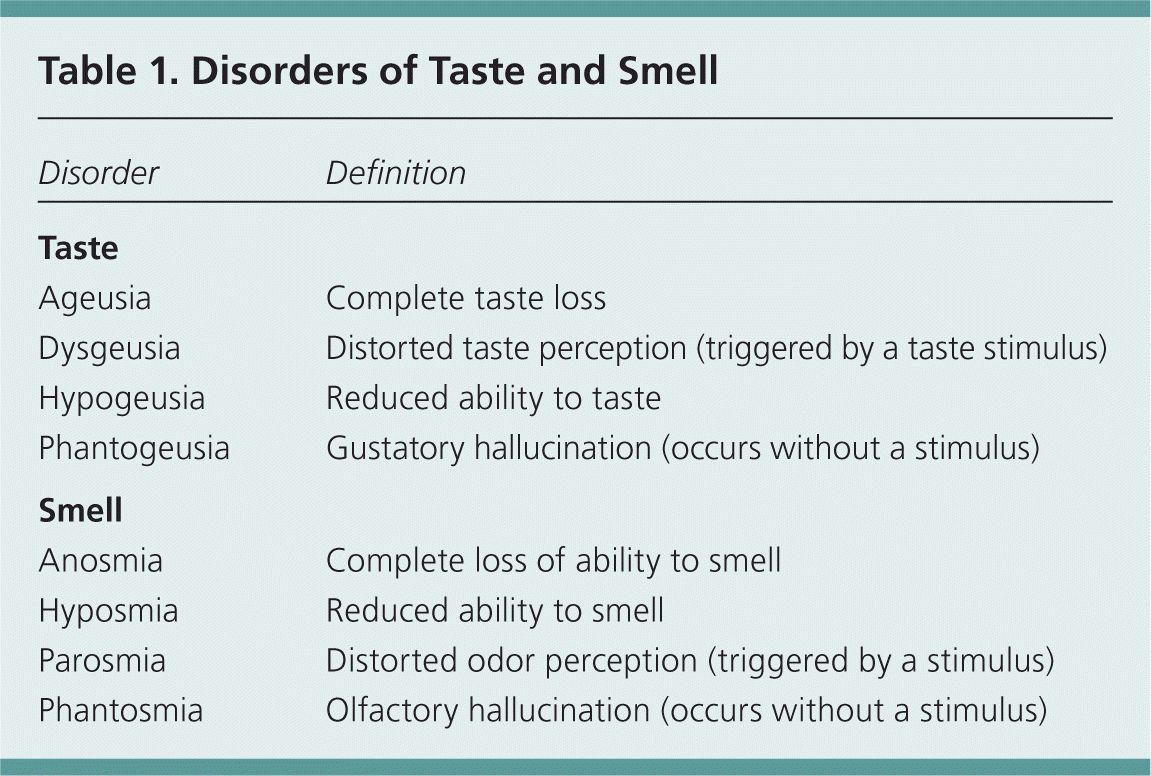 Researchers suggest the higher prevalence of OD in mild COVID-19 cases is from the body developing a more robust local immune response to the virus, through a higher production of antibodies. Due to the local inflammatory reaction, patients with mild cases could have stronger impairment of olfactory cells. Those with a long duration of OD could have more extensive injuries of their olfactory cells and could take several months to recover. Overall, the study showed a range of recovery times for regaining sense of smell and taste. A quarter of patients hadn’t recovered their senses after two months, but on average, it took about three weeks to recover.

While losing your sense of smell and/or your ability to taste may not seem like drastic side effects compared to the other COVID-19 symptoms of shortness of breath, those dealing with the symptom say it's still not something to gamble with. It is resulting in negative mental health effects as well, said one Dallas-area mom dealing with altered senses months after recovering from coronavirus.

“Losing that ability, I think, has psychological effects on you. Like, you kind of freak out. Am I going crazy? What is happening to my body?” said COVID-19 survivor Kaitlyn Urenda-Culpepper. "It's frustrating because I'm a huge foodie, so I love to eat, I love to like, wine pair, cocktails, like those are my things. And when that taste is gone, that palette is gone. You know, it’s like something you enjoy out of life and it's gone."

About 20,000 members of a Facebook group managed by Absent.org called, “COVID-19 Smell and Taste Loss,” are sharing similar stories of “long haul COVID effects" like Urenda-Culpepper. Posts range from people asking for home remedies to help regain their senses, to people wanting assurance that they’re not alone in dealing with this strange side effect. On January 21, the Facebook group is launching The AbScent Network, a new space for members to share experiences and learn from each other.

"We already take for granted the fact that we have so much to eat already that we, you know, most of us are able to get food when we want it. To not be able to taste and then like just lose that sense of connection to your body, it just, it really messed with my head for a bit. I was almost depressed because you can't go around anybody, like you're just alone in your room, and nothing tastes good. You know when you're sad and you just want to eat some chocolate or like ‘Yeah, I'll get over it.’ None of that works,” Urenda-Culpepper said.

After catching the virus over the summer, Urenda-Culpepper has nearly regained all her senses back, but said specific preferences have changed, mentioning that her favorite wine no longer tastes the same. Her bout with COVID-19 left this once half-marathon runner and avid swimmer drained. She felt depleted, hiring a drip company to administer an IV cocktail of fluids.

"This is not something that you want to gamble with at all. I can't tell you how many stories I've heard — I work with a group called Marked by COVID — how many stories we get a day of people who didn't take it seriously. I've had family members who gathered during Thanksgiving, and then they got sick. You know, and they're still dealing with that. Thanksgiving was over a month ago,” Urenda-Culpepper said. "We're coming up on a year of this pandemic – 350,000 people have died, including my own mother."

Dallas-area couple Jolene and Kyron Morrison had differing experiences with the virus, which they both contracted in mid-December.

"I did lose my taste and smell,” Jolene Morrison said. "His smell was enhanced, for some reason, but he lost his taste. But he could smell everything. I was like ‘Oh my god, it's gonna be a long week.’ Every time I would get the Clorox wipes or the Lysol, he’s like way back in the other room, ‘What are you doing? Are you cleaning?’ And I’m like ‘I have to, we have COVID! I have to sanitize and clean.’ He’s like ‘It’s making me sick; it’s making me sick to my stomach.’"

Kyron Morrison said anytime Jolene would cook, it would taste way too salty, despite Jolene putting in the same amount of seasoning as always. This made Kyron not want to eat, causing him to lose 19 pounds. He was also hospitalized during his recovery.

"When you look at foods, foods you normally like and love to eat, when it has no taste, you don't entertain it. It's like it’s trash. You don't want to eat it,” Kyron Morrison said. "I went to the hospital and when I came back and believe me, it was like a blessing. People take it for granted. But that food, it was some of the best oatmeal I’d ever have.”

“We were about to have chili for dinner and I took two bites and couldn’t taste anything. I even grabbed a handful of onions, chewed those and still couldn’t taste.”

Steen tested positive the next day, and unfortunately hasn’t gained either of his senses back.

“It has been 2 months now,” Steen said. “I have tried multiple ‘home remedies,’ supplements and am just not letting it get me down. I can sense salt and sweetness, but just barely.”

McKinney resident Deirdre Goletto said she’s dealing with parosmia, a medical term for experiencing distortions of the sense of smell. She caught the virus in the final days of July, despite having taken all the precautions of mask wearing, hand washing, not eating in restaurants, etc.

"I did not get sick as many others have, my only symptom, in fact, was sudden and total loss of taste and smell (anosmia). I had read that most people’s sense of smell and taste returned within a few days, but that for some, it did not return at all. This thought terrified me, and my anxiety skyrocketed as days grew to weeks, and weeks grew to months with no improvement,” Goletto said.

In late September, Goletto said she noticed almost everything she ate tasted “foul” or “rotten.” This is a form of parosmia, according to ENT surgeon Professor Nirmal Kumar.

"I knew that this was a part of the ‘healing’ process after smell and taste loss. Since late September, I have been dealing with Parosmia. The condition fluctuates greatly from day to day and week to week. It has gone from a rotting flesh smell/taste, to a repulsively smokey/chemical smell like burnt olive oil on a campfire to a sour, acidic smell, which is where I am at now,” Goletto said. "Even filtered water I am sometimes unable to stomach. I tried to supplement my lack of proper nutrition with meal replacement shakes, but I am still left feeling tired, lethargic, and depressed most days.”

"While I thought that having anosmia for two months was bad, I can say with certainty that parosmia is 100 times worse. Not only do you not get to experience your favorite smells and flavors, but you become repulsed by them. Above all, the worst thing for me has been the reaction that other people have had when I tell them about what is going on with me,” Goletto said. "I can tell that many of my close friends and family members either don’t believe me, or don’t have any empathy for me at all. People don’t realize how much smell and taste impact our daily lives, or how often we talk about these senses without even realizing it.”

Goletto said she knows the recovery process is a waiting game and support groups have helped her know she’s not alone.

"Recently I have been able to enjoy Hawaiian pizza, black bean burgers, and eggplant parmesan, which in October I would not even have attempted due to how sensitive I was then. I still have countless trigger foods like coffee, onions, peanut butter, garlic, chicken, and cucumbers. So I know there is still much progress yet to be made,” she said.

Doctors say most patients will eventually get their normal senses back, and smell training may help, but the road ahead is proving to be a long one for some. Future studies are needed to determine the long-term recovery rate of olfactory dysfunction.