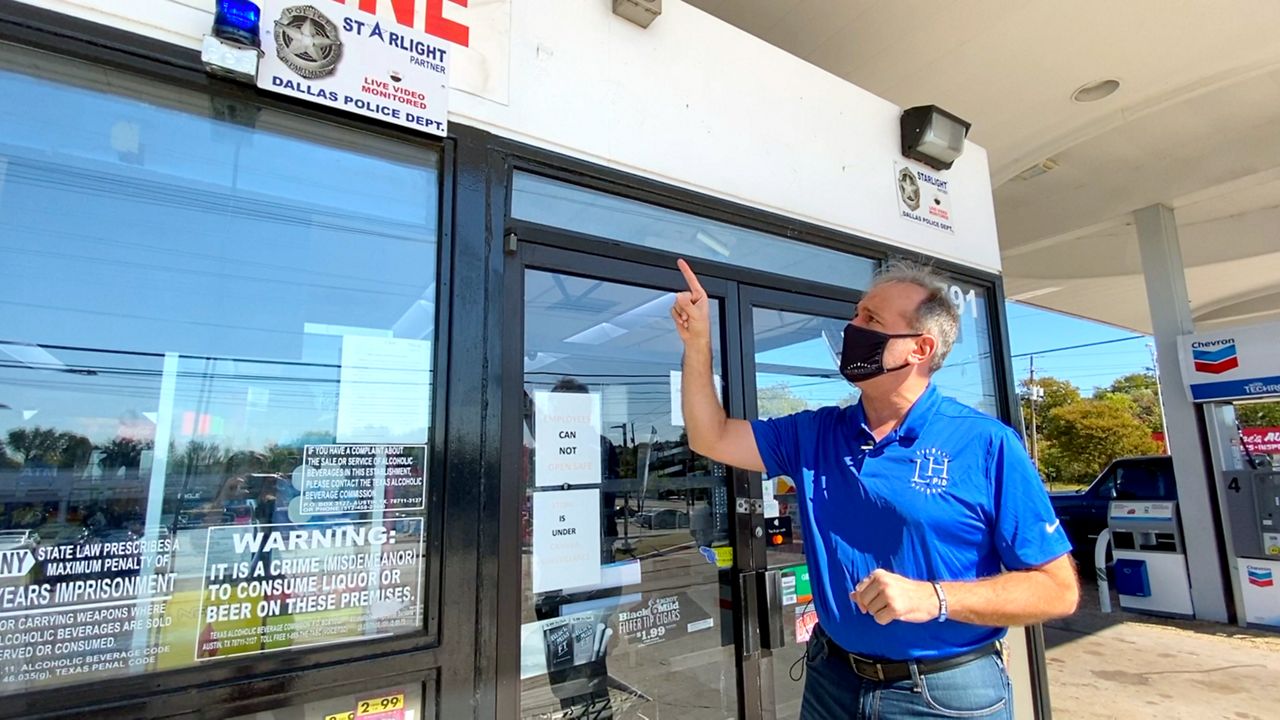 DALLAS – The Dallas Police Starlight Program is an initiative to reduce criminal activity and deter offenders from crime hotspots around the city, mainly at gas stations and convenience stores.

The program ran smoothly during its first year of implementation, with Dallas Police reporting a 39% decrease in calls for service and 35% reduction in offenses like open air drug sales and robberies during a September press conference.

The department is aiming to bring at least 20 locations online by the end of the year because the program has been so successful. DPD says it measures success with the program by the analyzing amount of call data and seeing a reduction, and reviewing the types of offenses occurring. Police also speak with the community to understand its perspective.

"I have a stack of business cards of folks that have said I want to be a part of this program," said Dallas Police Department Major Jim Lewis.

The four newest Starlight locations, which were announced in September, are mainly concentrated to one intersection in the North Lake Highlands area: Forest Lane and Audelia Road. North Lake Highlands Public Improvement District Director Chuck Laughlin said that section of Northeast Dallas is one of the most violent in the city.

"We've had a lot of issues with crime in this neighborhood, so we needed to bring in something and wanted the ability to partner with people to bring something in to really make a difference,” Laughlin said. "All people really want is the opportunity to have a safe place to live and raise their families. I'm getting calls almost daily going ‘How do I get involved in this program?'”

The Starlight Program has been described by DPD as “21st Century Policing,” and the surveillance cameras installed are able to feed video in real time back to the analysts in the Real Time Crime Center. The cost to outfit a location with the technology and the blue flashing lights is about $4,000 - $7,000 per location. In order to further expand, Safer Dallas Better Dallas Inc. — which donated the funding for the pilot program/initial three locations — is looking for partnerships to help fund more Starlight cameras. 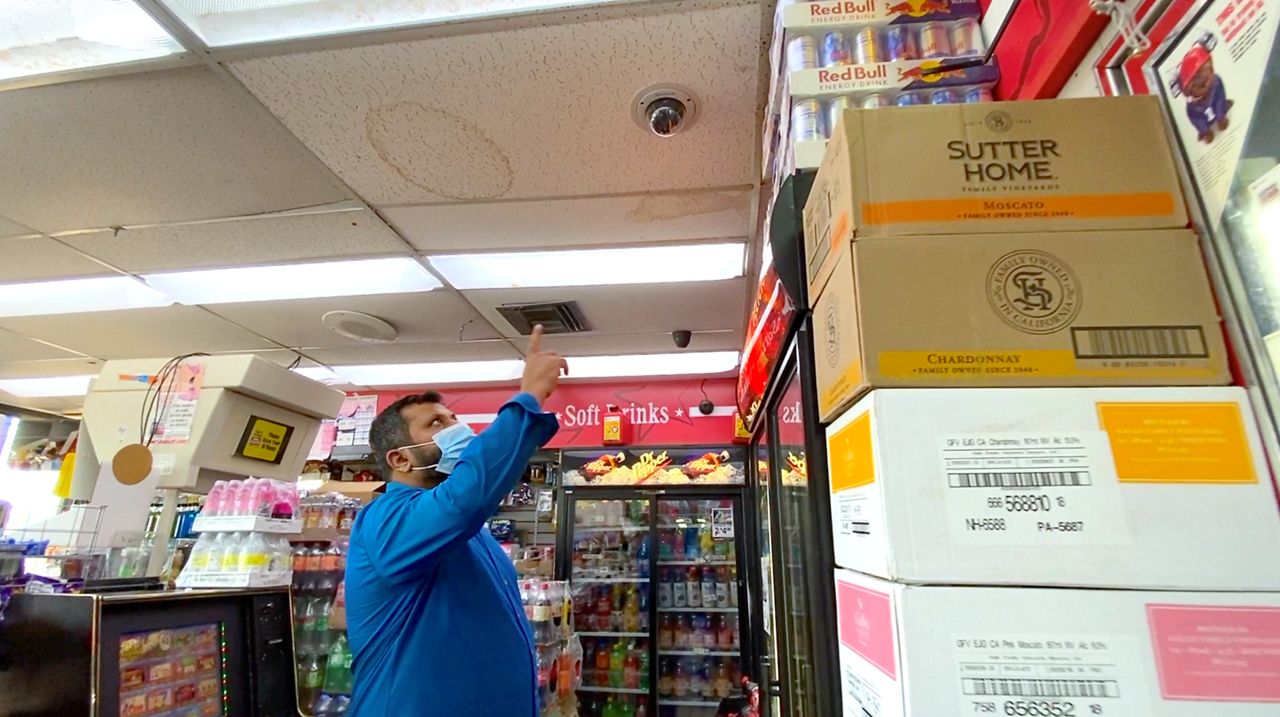 Saniraza Siddiq points to one of the Starlight Program cameras. (Spectrum News 1)

"It's been pretty useful,” said Saniraza Siddiq, the manager of the Chevron station located at Forest Lane and Audelia Road. "Like before, we had issues of a lot of guys hanging around and just standing all around here. And customers weren’t feeling safe coming inside the business. But since we got those cameras, it’s helping a lot in keeping all those guys away. Customers are very happy about it.”

The types of offenses the cameras can pick up are things like drug transactions, violent crime or prostitution. Video analysts will see the feed pop up automatically if something unusual happens, and they can notify dispatch to get officers to that location.

“One of the biggest portions, well, two – one would be robberies and the other would be open air drug sales,” Lewis said. "It is awful hard to stand in front of a location and attempt to sell drugs when you know cameras are watching you from multiple angles. So that has allowed us to be proactive. When we see individuals loitering at a business conducting what appear to us in our training as drug transactions, we’re deploying officers to those locations immediately without having to rely on or wait for the community.”

Since the launch of Phase Two of the program, the amount of loitering has gone down by 85 percent, according to the owner of the Starlight-outfitted stores at the intersection.

"So just the fact that criminals know by the blue light, they know that they're being watched by the police department, they don't want to go there. So they're looking at other locations to go and to stay away from those properties. So it's really helped out the businesses in clearing out the areas, so that customers feel safer in coming to those locations. We want people to feel safe in their homes and we want them to feel safe going and patronizing the businesses that are around here, and getting them business and helping them to thrive,” he said.

The Dallas Police Department acknowledges that crime being deterred from one location means it will likely show up down the road instead. Major Lewis said that displacement is part of the process.

“When you make a serious impact in one area there's a possibility for displacing that crime to other areas. However, you have to start somewhere, you have to gain a piece of ground before you can move to that next piece of ground. So that's one component of it is knowing that we are interrupting and impacting criminal activity in that area,” Lewis said. "Additionally, when you do disrupt those activities and force individuals to move outside of their comfort zone to commit crime, you also throw them off balance. And you make them more likely to make errors. That stimulates tips and information to the police department.”

Laughlin first moved to Dallas three decades ago. He settled into an apartment located next door to the strip mall where the newest Starlight cameras were installed. He knows firsthand the crime struggles the area faced and it’s a main reason why he took on his current role as PID director.

“So I really knew, coming into this area, that that I could help in cleaning up and being that conduit between the owners, the businesses, the police department, trying to help us in coming together and building a community. Because that's what we need to build here,” Laughlin said. 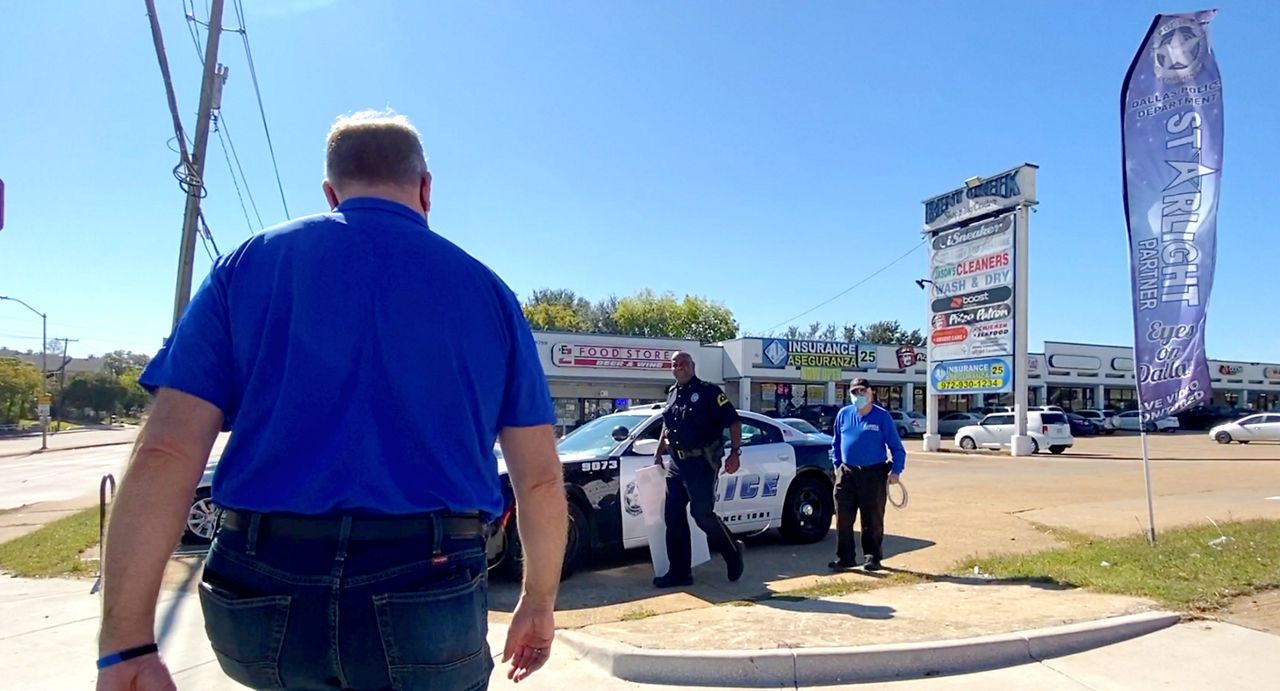 Since 2018, there’s been a federal, state, and local law enforcement task force in the area called Project Safe Neighborhoods (PSN),  which identifies the most pressing violent crime problems and develops solutions to address them. The neighborhoods targeted in this program includes much of Lake Highlands and Northeast Dallas. There are also off-duty officers called Extended Neighborhood Patrol (ENP) officers who are employed by the neighborhoods to help with policing.

"We've had a huge increase in the amount of drugs and guns that we've gotten off the street in this location. So we see the transformational change coming. Obviously this ship didn't get going in this direction overnight. So we're not going to turn it around overnight,” Laughlin said. "But we have to take our small victories and we have to start to effect that change and start to move forward. And that's really what we're doing by these small things that we're doing that make changes in the area and really build up the community.”