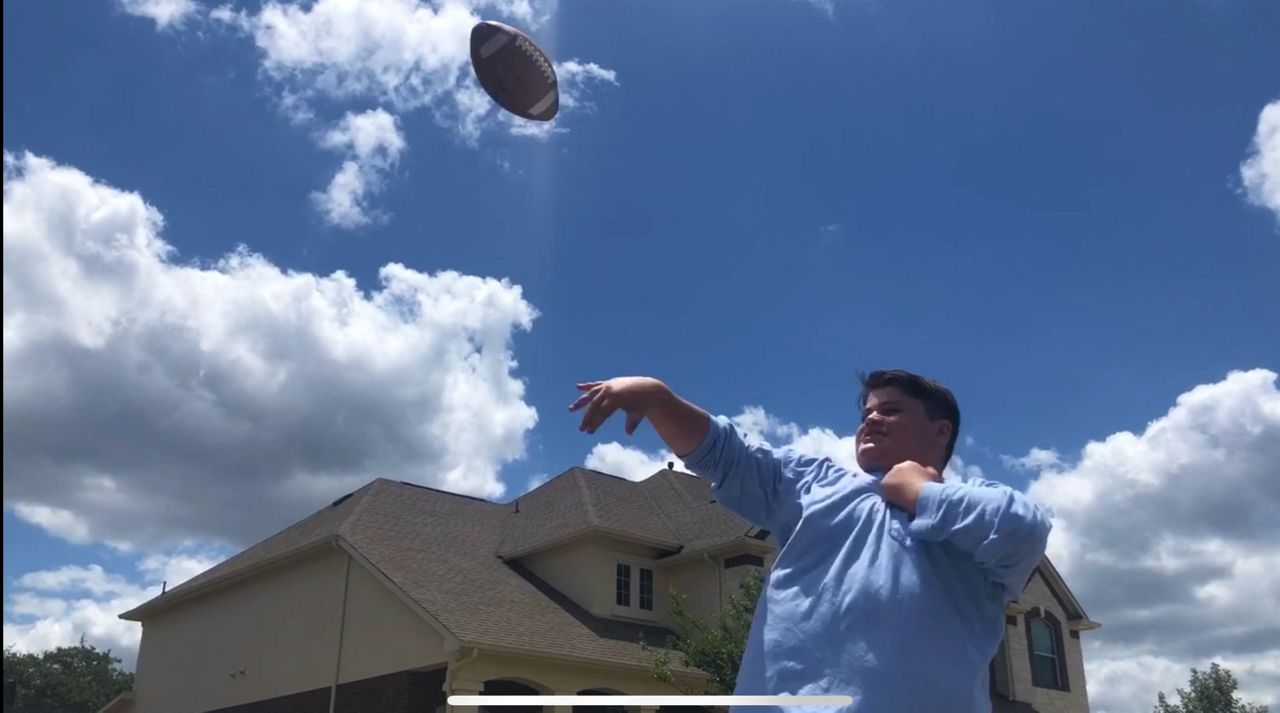 Gus DuPoy, who frequently attends University of Texas at Austin's football camps, throws a football in his front yard as camps were canceled this year (Spectrum News)

AUSTIN, Texas – On Monday, the Big 12 Conference announced each team will play nine conference games and one out-of-conference game at home.

So, if this plan sticks, the University of Texas at Austin would play five home games, instead of the six originally scheduled.

It's no secret that Longhorn football, especially those home games, bring in an enormous amount of money for the university.

According to numbers Spectrum News received from UT, the 2018-19 football season brought in $157 million overall. Factor in $43 million in expenses and the program netted $114 million.

Breaking it down category by category, ticket sales are the most lucrative for the program, bringing in $42.5 million alone.

Right now, the university is flip-flopping between allowing fans at 25 percent and 50 percent capacity, which will be a big loss either way.

Contributions, or donations, are the second-highest number on the operating revenues side, bringing in $39 million in the 2018-19 season. There’s no word yet on how donations will be affected by the shortened season, if at all.

One of the smaller operating revenues are the university's sports camps.

In 2019, football camp brought in less than $200,000, and once you factor in expenses, the school actually lost about $40,000. This year, like so many other things, camp was canceled. Although it's a small number on paper, it's a big loss for the kids who attend, including Gus DuPuy, who's been spending an awful lot of time playing video games this summer, when he'd rather be out playing football.

Gus says he loves to tackle people, adding, "It's just so electric and it's one of my favorite feelings in the world."

Gus has attended UT football camp for the past three years, and was looking forward to his fourth. He says it's not just about the learning opportunities on the field from guys like head coach Tom Herman and other UT alum, but also the friendships built.

"I can't connect with some of the people that I've met, ‘cause people go to that UT camp from all over the U.S. and not being able to see those people is a bummer," Gus said.

And Gus isn't the only one missing camp. His mom, Caroline DuPuy, is having to adjust as well.

"This is the story of my life right here," she laughs, standing over a full sink. "It's just the dishes are never-ending. No one has missed camp more than I have, for sure. Gus always spent that week with his grandmother who lives really close to campus."

Yes, Caroline DuPuy misses the free time, but also the excitement she would see on her son's face when he came home.

"I do think it's been huge for him to learn respect--not only for his coaches, but for his teammates and to get really excited but then to eat a big ole piece of humble pie too when maybe they don't win," Caroline DuPuy said.

The good news for Gus is he lives just a few houses down from his quarterback.

The QB-left tackle duo knows their work off the field is where success on the field begins.

"On the football field, you have to hold each other responsible for your actions and others' actions, so it's hard to push someone when you aren't in close contact with them," Gus said.

So they're pushing each other to stay as ready as possible for when the first whistle blows, whenever that may be.