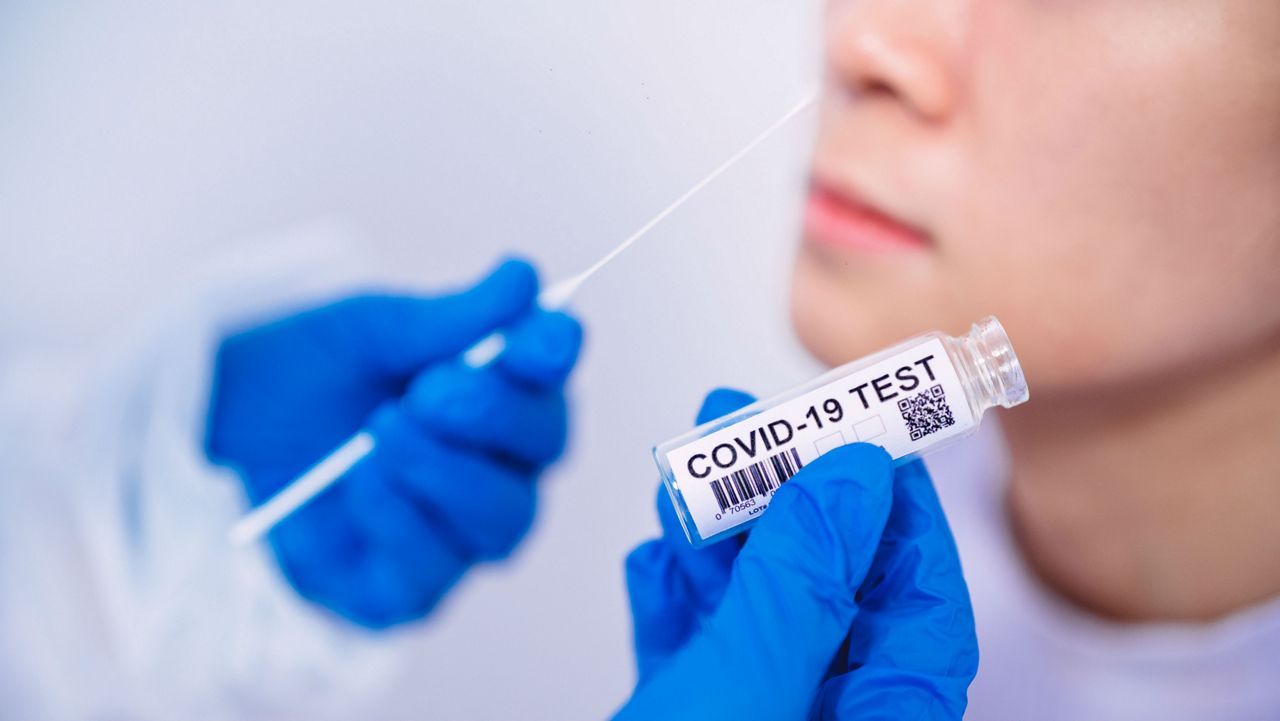 Stock image of a woman getting a COVID-19 test. (Getty Images)

HAYS COUNTY, Texas – Hays County has become a COVID-19 hotspot after seeing a documented case increase of more than 100 percent in the past week. District 45 state Rep. Erin Zwiener has been pushing county and state governments to increase efforts to combat the COVID-19 crisis. She says she’s concerned as a public official but also as a mother and a caregiver.

"I am worried. I'm worried about my community. One in every 300 people in Hays County right now is an active, diagnosed COVID case. That is alarming. And we know it is probably just the tip of the iceberg. I don't need the governor to minimize what's going on here, I need him to come help and make sure that we can get this under control and not become — or not continue to be a major hotspot,” Zwiener said.

During a June 16 press conference, Gov. Greg Abbott questioned Hays County numbers stating that there were “zero” cases reported on Saturday and Sunday, but Monday reported 265 cases. He said: “It seems like these numbers were batched together.”

He also made a comment stating that Hays County numbers were only “a little bit above” previously reported numbers.

However, county officials have been publicly reporting daily COVID-19 data as it comes in and they say there were 142 cases Saturday, 54 on Sunday, and 69 on Monday. Spectrum News asked county officials where the governor received his information and where the discrepancy originated, they said: “All our cases are ultimately reported to the state. Ours go through Region 7 in Temple – from there the numbers are reported to the Department of State Health Services. If there was lag or delay in reporting, that would be a question for Region 7 or DSHS.”

"I don't understand what hiccup may have happened with the DSHS and the governor and the county getting the correct data,” Zwiener said. "What the governor said that was more alarming is that that was barely above Hays County's previous average of '30 to 40' cases a day. Hays County has never averaged around 30 to 40 cases a day. We went from averaging around 10 cases a day to suddenly averaging 80, 90 cases a day. If you look at the last seven days of reporting, our average cases per day was 90. A week ago, the past seven days of reporting, the average was 13. We've seen a seven-fold spike in our cases and I don't appreciate the governor minimizing that to the rest of the state”

Hays County epidemiologist Eric Schneider said the main contact points reported by patients for the new cases are protests, floating the rivers, and going to bars. He also noted that food service workers, construction workers, and those in health care are the industries with the highest amount of positive cases. During Abbott’s June 16 press conference, he stated that the majority of people under 30 tested positive because they were “going to bar-type settings.”

“We’re seeing that second wave that everyone has been talking about,” Schneider said. “We anticipated uptick as businesses, bars, restaurants and local hangouts reopen, but that number is growing faster than expected.”

However, Zwiener said it’s not fair to entirely place the blame on young people.

"I'm a little frustrated with the buck getting passed to young people. Yes, we are seeing disproportionate infection rates among young people, particularly our 20 to 29 cohort. But those are folks who are more likely to have a job that they can't work from home, that's public facing, and high exposure. And they're less likely to be able to afford to not work and those jobs are less likely to offer some type of paid sick benefit for them to stay home when they really should,” Zwiener said. "My other frustration with passing the buck to young people is that it's our responsibility as leaders to communicate with the whole constituency, and state level and federal level communications have been inconsistent at best, and I have seen nothing that's really targeted our young community. Instead, what I've seen is our governor and our president emphasize again and again that most people who die are in nursing homes, and do things like open the bars and the waterparks. Of course our young people are confused and don't necessarily know that this is about them."

Zwiener has been actively communicating to county government that more resources are needed to get Hays on a better track. She's sent a letter to commissioners and the county judge asking for more free and appointment-free testing sites, clearer contact tracing, and better and more transparent communication.

“I'll be honest, I'm a little bit disappointed. From my perspective, it seems like our Commissioner's Court is gridlocked, and the people who suffer for that are the people of Hays County. And now we're in this situation where Hays County, San Marcos in particular, is a hotspot. And we seem stuck,” Zwiener said. "If we are getting close to 1 percent of the population having active, diagnosed COVID-19 illness, that tells me there's a problem. And it tells me that we haven't been taking it seriously enough. It's always important to remember that the diagnosed cases are the tip of the iceberg. And so, whatever we have identified, there's more out there circulating in the community.”

So far, Zwiener said the county hasn’t officially responded to her letter. Zwiener’s office worked with state agencies to host pop-up drive-thru testing sites this week, which so far have had a major turnout. She wants to see a permanent public collection site that doesn’t turn anyone away.

Schneider said to the press Wednesday that they haven’t had a shortage of testing sites for people. However, some of the testing sites currently can’t do same-day appointments due to the high volume of the public wanting to get tested right now.

I’m very grateful that @TDEM has granted my request for free mobile testing east of I-35. #HaysCounty is seeing the highest caseloads in the I-35 corridor and among the Hispanic communities where there has not been easily available testing. pic.twitter.com/Qw6sDQZ9HP

“Ever since things have began to ramp up, if somebody needs a test, they’re not getting turned away,” Schneider said. “As far as putting together a drive-thru, we are a small health department with very minimal resources so we’re trying to do the very best we can with what we have."

On Sunday, at least 700 tests were performed at Bonham Elementary as part of the National Guard’s mobile test collection site. On Wednesday, a site in Kyle at Simon Middle School had long lines and ran into overtime.

"One percent of the city of San Marcos waited hours to get tested on Sunday. There's clearly a demand for testing. And I'm so glad those folks got tested, I'm really sorry they had to wait. But to me it underscores the fact that we have needed this public testing site in San Marcos already. We need something permanent and well established and I really hope the county takes action on that soon,” Zwiener said.

Here’s less than half of the line of folks waiting to get tested at Simon Middle School.

Thanks so much to @TDEM for coming to Kyle, to @HaysCISD for offering space, and to @CityofKyleTX and @hayscountygov for coordinating.

Overall, Zwiener says she’s noticed a lack of mask wearing and physical distancing in the last few weeks. As a caregiver for her 92-year-old grandmother, the state representative is being more cautious after seeing the spike in cases.

"I am doubling down on being careful. It means my family's having conversations about whether or not my grandmother gets to see her sons because of the risk factors. It means we're more isolated, it means she's more isolated,” Zwiener said. "If we had a smarter reopening plan that could make it successful. Where everybody was wearing masks and where we will continue to keep some of the highest risk spaces closed and provided them with financial support through that closure— that would let us actually return to some level of normalcy sooner. But whenever everybody's not wearing a mask, I mean, I personally don't go to the grocery store. We send my husband, so that if he gets sick first he can isolate while I still take care of my grandmother.”

When asked if the governor did anything positive in her eyes in response to this pandemic, Zwiener paused to think before commending Abbott on shutting the state down.

"I really appreciate that Governor Abbott did the statewide closures. I think it was necessary and I'm grateful he had the political will to do it. I'm really grateful that he and DSHS have set minimum standards for businesses opening. But where I really think they've gone wrong is not investing enough in testing and contact tracing, and not making it clear that those health standards are enforceable and supporting our localities as they enforce them, and preventing our counties and cities from enforcing mask wearing requirements in public businesses,” Zwiener said.

Leaders from across Texas have been asking the governor to reverse his stance on not allowing local jurisdictions to enforce wearing a face covering. Nine mayors from the largest Texas cities sent a letter to his office asking for the ability to impose more strict orders on mask wearing. Now, leaders seem to have found a way to mandate face coverings that complies with Abbott’s orders, by requiring businesses to require employees and customers to wear face masks. Bexar County and Travis County are both moving forward with this requirement, and Hays County Judge Ruben Becerra tweeted on Wednesday that he may be adding his own local order in the future.

Thank you to @BexarCounty @Judge_wolff. We have received your #COVID19 order and I am carefully reviewing with @hayscountygov General Counsel. Update to follow.

Zwiener said not mandating mask wearing would put Texas on a “dangerous footing.”

"And we've seen it lull the people of Texas into a false sense of security. You know, the shutdown did get the numbers under control and now we're seeing them climb again because we didn't take advantage of that shutdown— we didn't take advantage of what we gained. And now everybody's gonna pay for it— both with public health and businesses are going to pay with fewer customers as people are more scared to go out,” she said.

Overall, Zwiener said the public needs to act as if you’ve already been exposed to COVID-19 and take the necessary precautions to keep it from spreading.

“This is a critical moment for us and so I really want to encourage everyone in Hays County to be safe. Don't just try to act like you don't want to get COVID-19, act like you've already been exposed and are trying not to spread it to your friends and family,” Zwiener said.