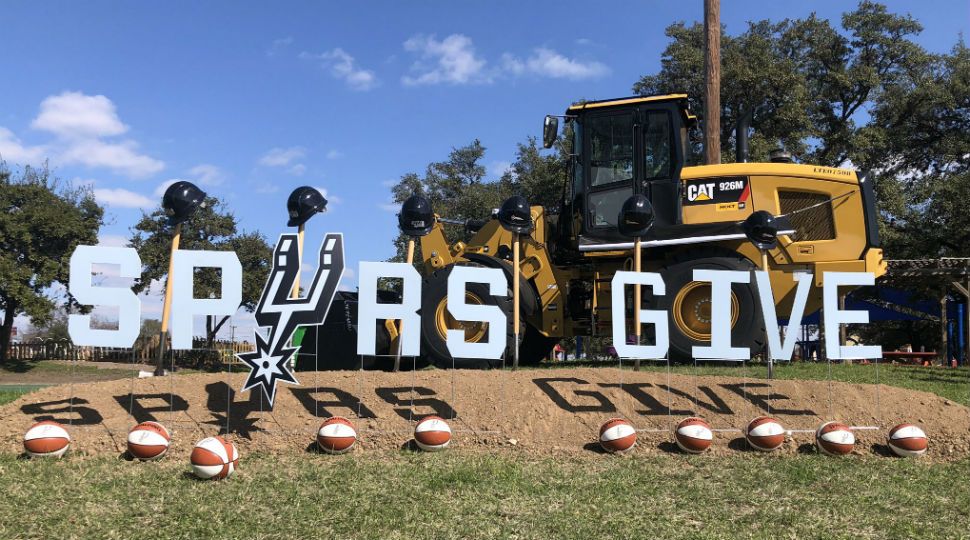 A sign that reads "Spurs Give" displayed at Woodard Park with basketballs, a construction vehicle and construction hats during the groundbreaking for a new park/basketball court part of the new Spurs Give and City of San Antonio initiative January 31, 2020 (Spectrum News)

Spurs Team Up with City of San Antonio to Invest in Parks, Basketball Courts

SAN ANTONIO -- Spurs Give, formerly known as Silver & Black Give Back, announced a partnership with the City of San Antonio on Friday.

The partnership will include a new $1 million project--Play SA--a four-year commitment to renovate parks and community basketball courts across San Antonio.

“It is crucial that families have accessible, secure spaces to engage in physical activity,” said SS&E CEO RC Buford. “We are excited to team up with the City of San Antonio to inspire generations of families to stay active together through Play SA.”

The donation to the San Antonio Parks & Recreation Department will help rebuild, refurbish, and update parks and indoor and outdoor basketball courts across the city. The upcoming overhaul will include the renovation and restoration of parks in all 10 districts of San Antonio based on community needs, starting with a new basketball court at Woodard Park.

The @spurs just announced a $1 million donation to San Antonio’s parks. @aldridge_12 is also giving $100k of his own money to the project. pic.twitter.com/OivHhkeo0w

“We’re thrilled to partner with Spurs Give to invest in parks across San Antonio. Spurs Give has a wonderful 30-year history of supporting the San Antonio community and especially, our youth,” said Mayor Ron Nirenberg.

Spurs Give, then known as the Spurs Foundation, started in 1988 in an effort to generate goodwill and financial support for economically, emotionally and physically disadvantaged local youth.

It has since grown to become a staple in the San Antonio community highlighted by several flagship programs including the Spurs Youth Basketball League, Operation Renovation, SAFC Micro League, and more.

In its 30 years of service to the community, Spurs Give has focused on supporting youth sports and youth-led service programs throughout San Antonio and South and Central Texas by investing over $28 million back into the community and has impacted over 420,000 kids and coaches across 23 sites.