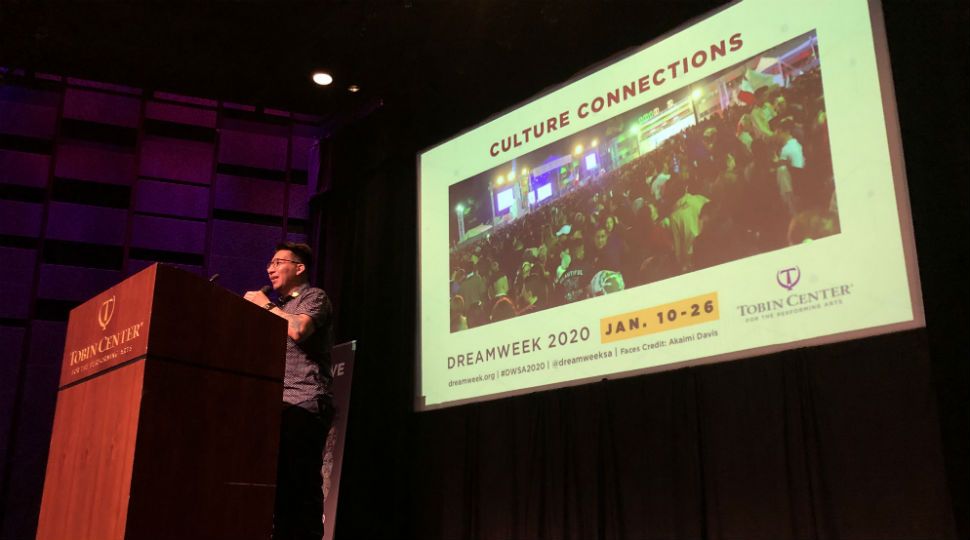 Frank Trejo, a migrant who moved from Mexico at the age of six, stands on stage at the Tobin Center with a DreamWeek presentation in the background while sharing his story (Spectrum News)

"Everybody Deserves an Opportunity, Wherever They Come From”: Migrants Share Their Stories

SAN ANTONIO – The Alamo City’s cultural diversity has been on display at the Tobin Center for DreamWeek. More than a dozen migrants now living in San Antonio shared the stories of their travels to America.

“I showed up here to San Antonio, Texas - hot weather - with a suit on and everything," said Frank Trejo, a migrant who moved from Mexico at the age of .

While still in elementary school, Trejo and his family moved to the Alamo City for reasons thousands can relate to.

"Everybody deserves an opportunity, wherever they come from," said Trejo. "Everybody has their story, and everybody has something to contribute not for just the United States, but the whole world."

Today, Trejo contributes his skills to DreamVoice, working as a web developer to advance the voice of diversity and equality.

"I think it's just figuring out how to interweave your culture with the American culture, and being able to connect," said Trejo.

However, connecting can be a challenge for many, especially if you're from a country thousands of miles away.

"It was really hard for me in the beginning," said Lilly Guindy, who migrated from Egypt. "You know just missing home, missing friends, and family."

Guindy first moved to Oklahoma before settling down in San Antonio. She too came to the States with a vision for growth.

"A lot of complications sometimes happen," said Guindy, "But, there’s always hope and tomorrow carries something new, you never know. Whenever a door opens, just get the opportunity and move forward.”

For Guindy and Trejo, it's about moving forward in a new city with a common denominator that drives us all--opportunity.

"I really, really consider it my home now. I don’t want to say my second home, because it’s actually my first now," said Guindy. "I live here and I’m very happy with everything going on."

Trejo says no matter what country you come from, following your upbringing and heart will lead you on a successful journey on achieving the American Dream.