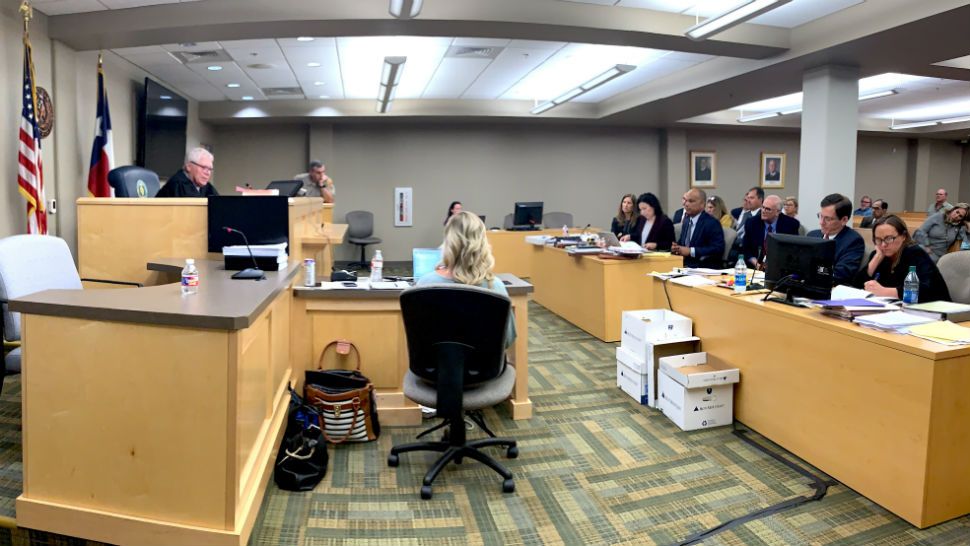 GUADALUPE COUNTY, Texas — After two days of testimony, a judge has decided not to grant a temporary injunction that would've reigned in Guadalupe-Blanco River Authority's expenditures.

Judge Stephen Abled denied the lakefront property owner’s request for the injunction stating the plaintiffs did not meet their burden of proving irreparable harm would immediately occur if the temporary injunction wasn't in place.

The agency was sued because the property owners felt it was “wasting” unrestricted funds that could otherwise be put toward replacing the six aging dams.

This conflict stems from the failure of the dam at Lake Dunlap back in May and at Lake Wood in 2016.

The injunction the plaintiffs were hoping to win would’ve prohibited GBRA from paying nonprofit organizations, buying or leasing real estate, spending money that would benefit GBRA officials, and entering into any new contracts for selling water below fair market values.

Plaintiff attorney Doug Sutter referenced the Sunset Advisory Commission's 2018-2019 Staff Report of GBRA and Texas Commission on Environmental Quality's dam inspections several times during the hearing. While Patteson was on the stand, Sutter showed several pictures of the damage these structures have taken on over the last nearly 100 years, which led to a heated exchange.

"Look at these photographs? Do they not indicate years and years of neglect by GBRA of this asset with the Sunset Advisory Commission criticized you for?" Sutter asked Patteson.

"I get that you've got to make that argument. I've stated they're 90 years old, there's going to be continuing issues with the gates and the dams," Patteson said.

"To these particular issues? Sure, okay," Patteson said.

"Would a reasonably prudent person conclude that GBRA has been woefully negligent in the maintenance of these dams?" Sutter asked.

"I disagree with that," Patteson said.

"You don't think a reasonable person sitting here in the jury box, or sitting out here or the judge himself could say 'That looks like a lack of maintenance.'?" Sutter asked.

"The judge can certainly say whatever he wants," Patteson said.

Patteson stated the plaintiffs' didn't have the "right to come into [GBRA's] business and tell [GBRA] how to operate."

GBRA's attorney Lamont Jefferson echoed Patteson, saying he felt the plaintiffs were attempting to "micromanage" GBRA and force them to fix the dams using the "improper procedural vehicle of an injunction."

He believes the plaintiffs were insisting they "cannibalize the profitable businesses GBRA has and take the reserves and do nothing but appease these plaintiffs so that our customers across South Texas suffer for the sake of these plaintiffs who want us to spend money to support them."

Sutter pulled up financial reports showing in 2018, GBRA had $43 million in "unrestricted funds" that the plaintiffs believe should go toward replacing the dams. Sutter called GBRA's expenditures into question, stating there was a "gross mismanagement" of funds. Sutter said GBRA has provided more than $4 million to nonprofit groups, entered into what he called a "sweetheart deal" with New Braunfels Utilities selling water at a "discounted" rate, and moved forward with the plans to spend $6 to $7 million on the new GBRA headquarters in New Braunfels.

Jefferson stated that $43 million in the "reserve fund" goes to show the agency isn't "mismanaging funds."

"[GBRA] has been responsible financial stewards of the resources entrusted to it and has grown a significant reserve fund, which goes to show it’s not the evil empire that is depicted of it by Mr. Sutter," Jefferson said.

Ultimately, Jefferson's argument was the plaintiffs didn't have the "standing to interfere," nor could they prove they were entitled to an injunction. Jefferson said, and ultimately the judge agreed, that irreparable harm would not happen if the temporary injunction didn't go through.

While Sutter said the case didn’t go their way, he still considers it a win.

“We're very happy with that. But for this hearing, people would not know what's been going on with GBRA. It's not anything personal, but the thing we established today was the arrogance of this organization. You heard the testimony of the general manager, 'You don't have any right to tell us how to do our business.' And we do have a right because I represent property owners and we're citizens of the state of Texas. They work for us, not vice versa. What you've seen here in the past, I believe, GBRA thinks we work for them and they do whatever they want. After today, that’s over. Even if there’s not a temporary injunction on these issues... So we’re very pleased with the outcome. We would’ve liked to have had an order, but we’re still pleased because these activities are going to end,” Sutter said.

Jefferson said this temporary injunction would’ve had a significant impact on how the agency does business.

"The plaintiffs in this case have personal interests... They're concerned because they're lakefront owners, not because they're citizens of the state of Texas. Yes, of course, GBRA has a responsibility to act responsibly in fulfilling its mission as delegated to it by the state of Texas. But the plaintiffs here are not here for the state of Texas, they're here for their backyards," Jefferson said. “The lawsuit itself is a huge distraction from solving a problem of what are we going to do about these spill gates? And what are we going to do about these reservoirs that the plaintiffs care so much about."

This decision does not mean that the entire lawsuit is over with. Sutter said the next steps will be the discovery and deposition phase, where GBRA’s expenditures will be looked at further. That will not be open to the public.

The temporary injunction that halted the Guadalupe Valley lakes from being drained granted in September does remain in place. The lawsuit's trial date is still October 5, 2020.