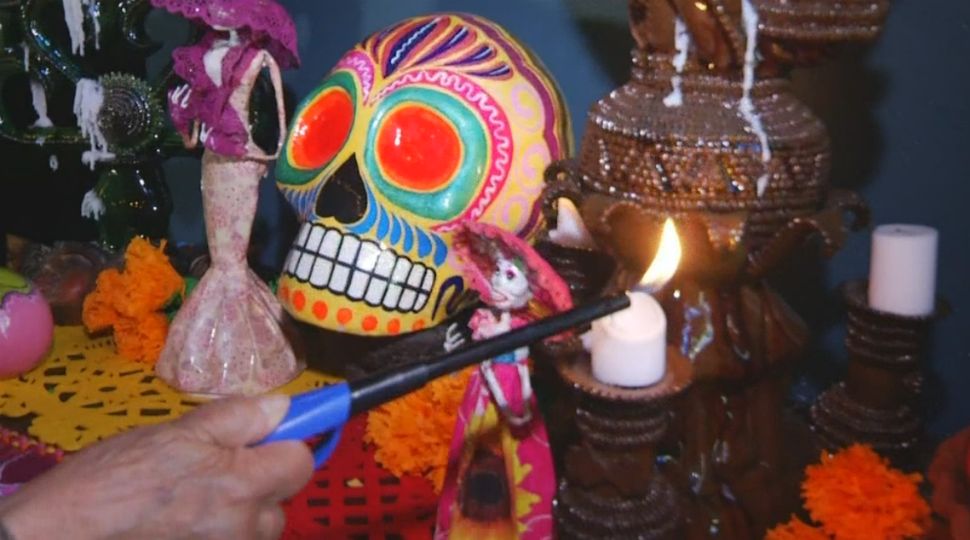 Ellen Riojas Clark lights a candle on her Day of the Dead alter October 20, 2019 (Spectrum News)

It’s an altar built for the dead and is a centerpiece of Dia De Los Muertos celebrations. It’s not meant to be morbid but rather a celebration of life.

The skulls on the altar speak to who a person was.

"I always in real life wear my lipstick. So if you're a 'catrina', which means you're a female skeleton, you will have your face painted with your eye makeup on," she said.

The altar includes fire – flames from candles to light the way. There is also water.

"A little container of water to refresh the soul as they come back," explained Clark.

The Marigold flowers line the edges of the altar to guide souls back to earth.

Dia de los Muertos has become a fusion between the customs of indigenous and Mexican cultures. Each year, on November 1 and 2, people will gather around altars to celebrate and speak the names of those who have passed on.

Altars are traditionally set up in homes and sometimes surround headstones in cemeteries.

“You clean up the grave. And you bring food items. You have a picnic. You have music," she said.

They celebrate people who may be physically gone, but living in memories.

"I know that my altar, because I consider myself a tequila drinker, is going to have a bottle of tequila on it," Clark said. "When I die, I hope somebody will say Ellen Riojas Clark – ‘presente’. Presente means present. So that means as soon as you say the name that person is evoked and present in everyday life. I think that's lovely and beautiful."

If you'd like to check all the altars, food and art in person, the Dia de los Muertos festival begins Friday and runs through Sunday at La Villita.