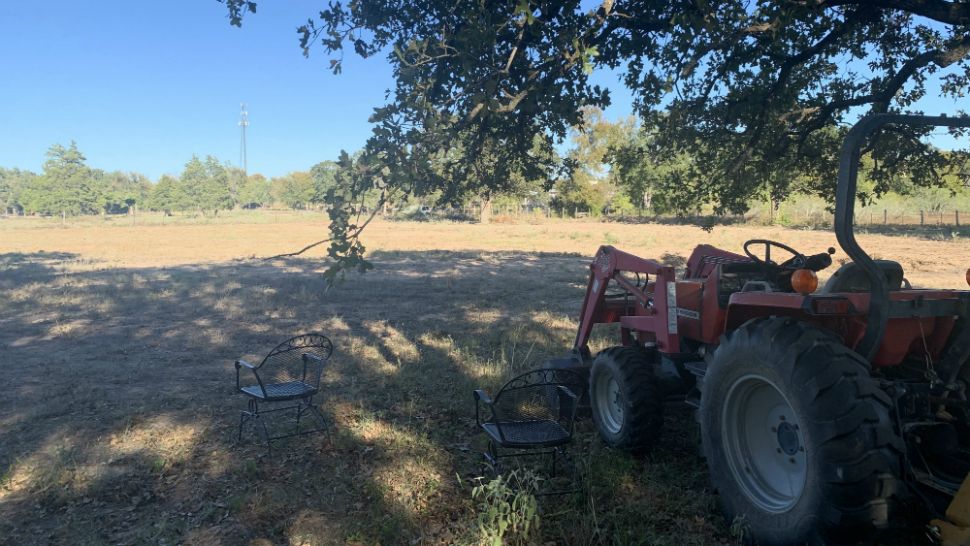 A tractor and a chair sit in an empty field. (Spectrum News photograph)

But this is something that's been in the works for a long time and right now things seem to be at a standstill.

The 2018 Farm Bill legalized the commercial production of hemp. House Bill 1325, which Governor Abbott signed this year, authorized the production, inspection and retail sale of hemp crops in Texas.

However, right now, hemp is not legal to grow in Texas because the Texas Department of Agriculture still needs to send a "state hemp plan" to the USDA.

A lot of things need to happen before that plan can be sent. But once the plan is approved, and the rules are adopted, hemp will then be legal to grow in Texas. The Texas Department of Agriculture hopes to start taking applications for growing permits in 2020, and some Texas farmers are already preparing.

“There’s more to it than just putting a seed in the ground and growing it." -- Doug Arnew, prospective hemp farmer.

Doug Arnew hopes to farm hemp on 2 to 3 acres of his land in Cedar Creek. But it’s not just a business endeavor, it is personal.

Two of his family members rely on CBD for health reasons.

Doug’s stepson, Matt Oestreich, has been using CBD oil as one part of his treatment regimen for his epilepsy condition.

“I have scars all over myself from having seizures and stuff. And like I said, when I’m on that medication I’m seizure free," said Oestreich.

But hemp farming is expensive, and Doug's personal tie to the crop is part of why he wants to make sure he’s prepared before he takes the leap. ​

“I don’t want to just jump into this, not being educated and not understanding all the ins and outs of farming this particular plant," said Doug Arnew.

Hemp can be tricky to grow. It needs specific conditions to thrive, and each strain can react to an environment differently.

That’s why Texas Hemp Growers is holding master classes around the state, to educate farmers before they make their investment in the crop.

"If a farmer jumps into this without the right education without the right knowledge of where they're getting their plant material from and to where they're going to be selling that at the end of harvest, there's a lot of opportunity for them to lose their invest. And that's what Texas him growers is trying to prevent," said Zachary Maxwell, President of Texas Hemp Growers. “We want to make sure that the farmers understand that there is in fact a lot of money to be had, but you need to get educated first up and make sure that you have all the answers before you go and buy your seed and put it in the ground.”

But for Doug Arnew and his family, all that research and effort will make the end product even more fruitful.

“It's nice because what he’s trying to do is not just be able to make a nice penny here, he’ll really be able to put out medicine for a lot of people," said Oestreich.

“It’s about growing something that people can use. You know, that helps them. Like Matt, you know, or my wife," said Doug Arnew.