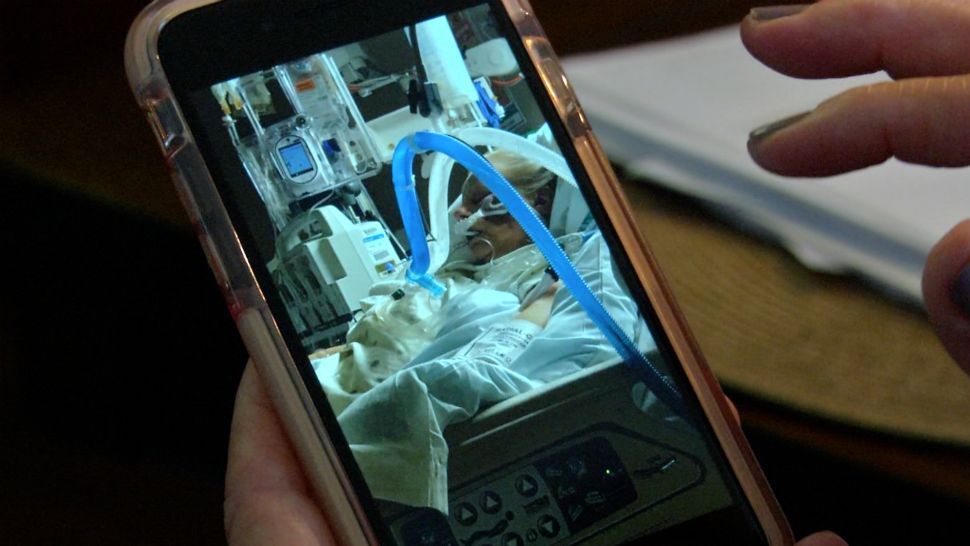 Photo of Georganna Sekula in the hospital. (Spectrum News/Stacy Rickard)

KYLE, Texas — A woman in Kyle is warning others to be careful around stray cats that could have infected fleas. She had to be put into a coma to survive after becoming severely ill from a flea that bit her and gave her a Rickettsial infection.

Georganna Sekula is a self-proclaimed cat lover, and said she made the mistake of picking up a stray cat back in February. Her doctors believe that cat's fleas spread Rickettsia bacteria.

"Whenever these two cats started coming up, my husband knew immediately I was going to start feeding them, but he never thought I would touch them, but I did," Sekula said. "When she realized that I was her friend, I was like just so overcome with her that I picked her up and my husband's like 'Put that cat down.' I had picked her up because I was so excited that she finally let me into her life. Well, I guess that's when I got the flea bite."

While the flea came off a stray cat, advocates want to stress that stray and feral “cats are merely a host for fleas and if the cats are eliminated, the fleas simply find another host like squirrels and raccoons.” Prevention of fleas and ticks and keeping distance from wildlife is the best way to avoid a Rickettsial infection.

She said her sickness started when she got a really bad headache. She went to a clinic in Kyle where they thought she had a pinched nerve. Then her symptoms got worse, and her husband took her to the emergency room.

"They said that they did see a bite on my ear. So they assumed that it could have been just cellulitis, something from maybe a bug," Sekula said.

A few days later, she was admitted to the hospital for sepsis and pneumonia.

She wasn't improving. She entered the ICU and was intubated and put on a ventilator.

"I stayed there for 10 days, and was put into a clinically-induced coma to make me survive," Sekula said.

While she was in the coma, Sekula said her sister told the doctors about a rash on Sekula's forearm that had appeared when she first started getting sick, but went away. That led the doctors to bring in an infectious disease doctor.

"They called an infectious disease doctor here in Kyle. She came over and she said it sounds like Rickettsia. But It takes five days to get a positive result. I didn't have five days, I barely had five hours, because I was on my way out," Sekula said.

Her kidneys and liver were shutting down. That's when the doctor started her on the antibiotic doxycycline, the treatment for Rickettsial infections.

"It's normally from a tick, but the doctors say that this is a rare case," Sekula said. "The doctors said I am the third person in Hays County in 11 years to have Rocky Mountain Spotted Fever.​"

After starting doxycycline, she started improving within a day. She has gone through months of physical therapy and now has thousands of dollars in medical bills and is just now back to work part-time. Sekula said her doctors told her it's a miracle she is alive.

"Being in a coma is extremely stressful to your body. And so you lose all your abilities to walk, talk, feed yourself, do anything. I had no physical body functions left. That emotionally took me away. I just knew that I was never going to walk, was never going to be the same," Sekula said. "I'm recovering and I'm alive and I'm here to see my family so to me, that's a miracle in itself."

Sekula now wants to warn others against picking up stray cats that could have fleas, and other wildlife.

"The two cats that I was feeding were trapped by my husband and given to Kyle PD and they were taken to San Marcos Regional Animal Shelter and they tested positive for Rickettsia. They were treated and adopted out, but I suffered out of being kind to an animal. Which I still will, but I will keep my distance," Sekula said.