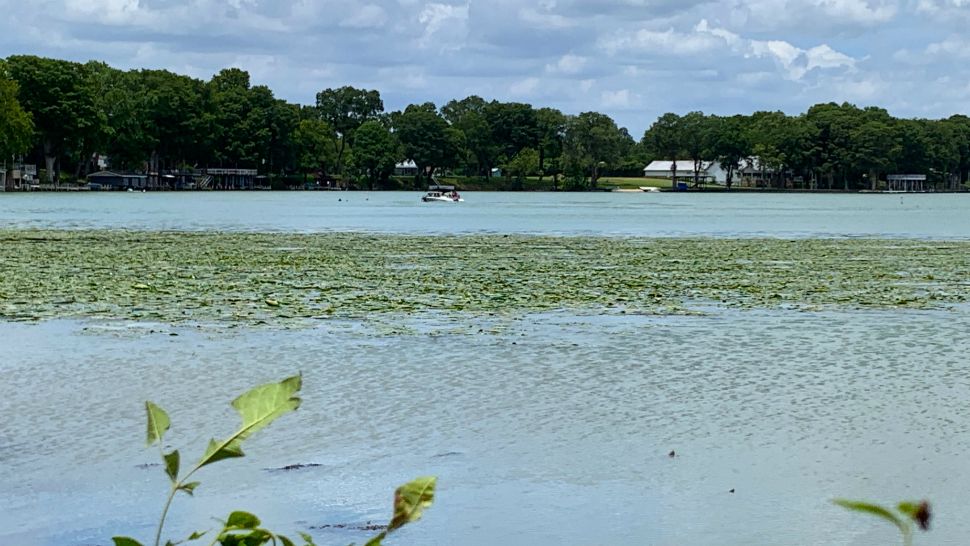 A portion of Lake McQueeney in Guadalupe County, Texas, appears in this image from July 17, 2019. (Stacy Rickard/Spectrum News)

GBRA Considers Emptying 4 Lakes Along Guadalupe River Out of Caution

GUADALUPE COUNTY, Texas -- Two months after a s​pillgate failed at Lake Dunlap and more than three years since the failure at Lake Wood, the Guadalupe-Blanco River Authority is considering draining the remaining lakes on its dam system.

Concerned residents packed the GBRA board room in Seguin Wednesday morning after hearing the rumors the agency could possibly discuss dewatering Lake McQueeney, Lake Placid, Meadow Lake, and Lake Gonzales at the meeting.

"We understand the public heard that there's consideration that the lakes might go down," said GBRA general manager Kevin Patteson. "We haven't made a decision. We're considering all mitigation measures."

If you didn’t attend the very packed board meeting Wednesday, @GBRATX touched on the possibility of dewatering 4 lakes along the dam system. It’s an option the agency is considering — but not much else is known at this point. I am continuing to follow this story as it develops. pic.twitter.com/Egm2XUZykk

GBRA confirmed it is afraid another spillgate failure is imminent due to the aging dams, each almost 100 years old. The agency said in the interest of public safety, draining the lakes is an option that's being floated, removing the risk of failure that's currently a looming threat.

"No one likes what we're faced with and strategies are limited in this system," said GBRA deputy general manager Jonathan Stinson.

This dewatering option doesn't sit well with homeowners and lakegoers, and those whose livelihoods are dependent on a full lake.

"I see boat mechanics, dock builders, realtors. I'm sure with a show of hands in here - who makes a living off these lakes?" asked Thomas Belton, a Lake McQueeney businessowner. "There's a lot of people whose lives depend on the water being in the lake. I just want you to see faces."

RELATED: What's Next for Lake Dunlap? What We Know and What We Don't

At the meeting, GBRA engineer Charlie Hickman showed models of worst-case scenarios of three spillgates failing at McQueeney Dam, and noted that being in the water at the time a fail occurs could be deadly.

"Immediately below the dam, you have inundations in the neighborhood of 10-12 feet," Hickman said.

"Loss of life and potential impacts to property," Patteson said, referring to what outcomes are possible if a failure does happen downstream of McQueeney. "We really cannot keep people out of the water, so that's what we're trying to address."

"That is Chicken Little, 'the sky is falling,'" Dwyer said.

"While it may be the worst-case scenario, the sky did fall, and it fell twice." Stinson said. “I’m sorry it’s an economic issue. But if we kill somebody, how is there a future beyond that for any of the lakes?”

If GBRA chooses to lower the lake levels by up to 12 feet, a concern of residents is that the timeline for filling them back up won't be a priority.

"I don't think any of the good people here want to put individual lives at risk. What they're concerned about, what we're all concerned about is that it not stop there, right?" said concerned citizen Tess Coody-Anders. "Mitigating the immediate risk and having no long-term solution for repairing our way of life and the economics that have been developed over the last 90 years around those lakes."

If the lakes are drained, it would be indefinitely.

Patteson said this was the first opportunity for the GBRA board to hear these concerns and a decision regarding dewatering the lakes will be made in an open session at a later date.

"Management could make that decision that they deem it to too much of risk of the safety concern. We see it as a last resort, but public safety is number one," Patteson said. “The video of the Dunlap spillgate collapse validates our concerns, and we are not willing to risk lives should there be another spillgate failure.”

Patteson also noted that if the lake levels are taken down, GBRA will have an engineering firm inspect and determine the structural safety of the dams before they would be put back in

"To see what's below the water, in the concrete that we cannot see from above. So if we're going to have them down, we owe it to the community to inspect them to see if we can put them back in service, how quickly and what that would cost," Patteson said.

Per an open records request by Spectrum News after the Lake Dunlap spill gate failure, the last inspection of the dam at Lake Dunlap was in June 2018 by the Texas Commission on Environmental Quality.

According to the 2018 Inspection Report, "the dam was inspected by TCEQ Dam Safety staff on June 12, 2018 as part of a routine safety inspection and was found in good overall condition."

The dam at Lake Dunlap is a "high hazard dam," and according to the report, "a breach of the dam would adversely affect (overtop) both Lake McQueeney and Lake Placid Dams, 7.6 and 12.9 miles downstream respectively. A breach of the dam would also adversely affect multiple residential structures (primarily lake homes along McQueeney Lake) and FM78 and SH123."

In the meantime, the agency has a nearly $200 million price tag on replacing all six dams, around $30 million per dam. Funding for those replacements has not been determined.

"We keep hoping for the magic formula and we're not turning one up at the state or federal lever. So it's going to be a locally driven solution and GBRA wants to be a partner," Patteson said.

A potential locally driven solution is the area lake associations getting together to purchase the dams and form a taxing water district, supervised by the TCEQ. The district would need to be put to a vote, which could happen as soon as this November.