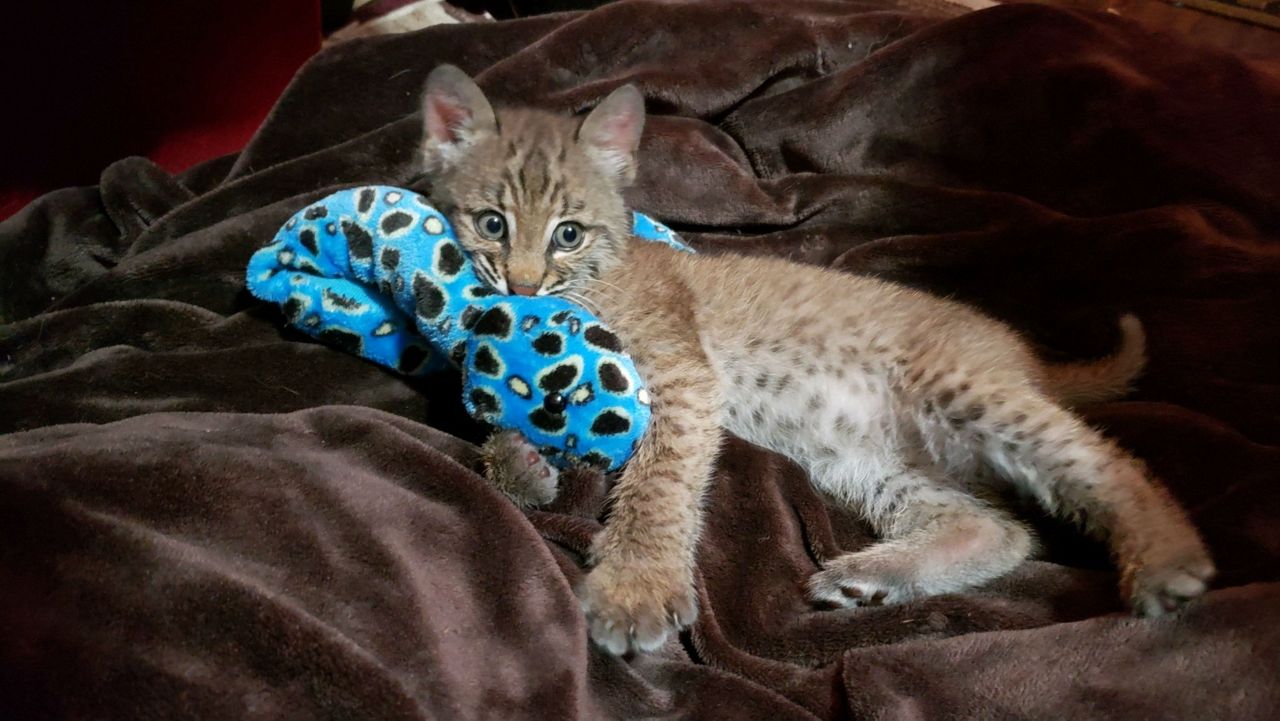 Tyler the Bobcat as a baby at Spiritual Wildlife Rescue and Rehab. (Courtesy: Moon Taylor)

TEXAS – An exotic animal trapper and rehabber in Arlington has been keeping very busy this year. While wildlife isn't necessairly on the move because of the pandemic, changes in human routines may make it feel like more wild animals are around.

Moon Taylor is one of just a handful of licensed bobcat rehabbers in Texas with the knowledge and skills to care for the medium-sized cat. She also specializes in rescuing wolves, coyotes, foxes and reptiles. She runs the Spiritual Wildlife Rescue and Rehabilitation.

"Growing up on a farm, it was – we came across anything from natural animals to farm animals to wildlife. I just cared for them. And as I grew older and everything else, my passion and my heart was taking care of the animals,” Taylor said. "I take in the orphans and the special need ones, because not too many people want to handle the medical expense, or the time and effort that goes into being with them 24/7.”

Because of COVID-19, Taylor said other trappers are being cautious about responding to calls and risking exposure. She said her phone rings non-stop with animal rescue and rehabbing requests. A couple hours before her interview with Spectrum News, she was in Carrolton, Texas, rescuing baby squirrels. Back in June, she received a request to trap three or four baby foxes at a private school in Kennedale that needed relocating. When she couldn’t make it to the school, the live trapper who works with her went instead.

"Emmitt was able to go out, he was able to trap those baby foxes from the school over there and we got them relocated over to some private land where they're being fed, they've got plenty of housing and they're safe,” Taylor said. "I actually do have several people that are land owners that I work with that we can release all releasable wildlife on and they make sure that there is no hunting, that the animal has water available like a creek or lake, they've got shelter, and sometimes these land owners will put extra, like, dead carcasses out there. So they've got that, but they've always got food to hunt naturally.”

The animals she rescues are always re-released if possible, but in special circumstances, they become residents of her rehab and assist with educational classes. Her “ambassador” of the rescue and a permanent family member is Tyler the Bobcat . In summer 2019, a game warden called Taylor about a baby bobcat seized from an abuse situation. She said hunters were using him as a training aid for their hunting dogs.

“Hunters had killed Tyler's mom. They put Tyler in this itty bitty cage and they let hunting dogs torture him. So at the same time, Tyler's eye was really, really cut up – his back was cut up. In the meantime, Tyler's paws were growing backward, because of the malnutrition and the torture he had gone through. It was literally a fight to save Tyler's life because he was going through pneumonia, health issues,” Taylor said.

Because of Tyler’s immune and bone deficiencies, his front paws are in need of surgery that is estimated to cost $4,000 - $5,000. Like many rehabbers, Taylor runs completely off of donations. She had several fundraising events planned for 2020, but had to cancel them because of the pandemic. Donations can be made via PayPal, and there’s information on her website on how you can donate supplies, too.

Taylor said she is increasingly running across many people keeping wildlife illegally. She said Texas has lax statewide laws when it comes to keeping exotic pets, and the legality is mainly left to city and county discretion. One of her newest rescue residents is a bobcat named Fiona who came from a situation where her owners became overwhelmed with the responsibility and neglected her.

“People think having an exotic pet is fascinating, it's something extraordinary until they realize the laws on it, or the financial burden. But they just – they need to understand, they need to think about the animal first instead of the glory,” Taylor said. "When a civilian keeps a wildlife, like what happened with Miss Fiona, they're putting that wildlife’s life in danger. And not only are they putting that baby's life in danger, they're putting their own life in danger, too. The simple fact is they can legally become incarcerated by the law, tickets, they can lose their job, or, you never know if that wildlife may accidentally turn on you because they're scared."

Moon wants to see stricter enforcement for those keeping, hunting, or torturing wildlife illegally. She said if you see an injured or orphaned animal, first call a wildlife rehabber.

"When you don't call a wildlife rehabber, reach out to your local game warden or animal control officer because they will get a hold of a wildlife rehabber that's in the area. When you don't, and you're caught with that animal, two things can happen to that animal. One, the animal can be put down or released out into the wild to fend for itself when it doesn't know how to. Or two, we’re lucky that it's brought to us to where we can help it,” Taylor said. "All wildlife rehabilitators, we operate basically on our own funds. We do rely a lot on the kindness of people who will donate, you know, pet beds, food cash donations, gift cards. Just anything to help us take care of the babies.”