Looking back on the Austin twin tornadoes of 1922

Almost 100 years ago today, an exceptionally unusual weather event happened in Austin. Two different tornadoes developed within minutes of each other and tore across the city, leaving behind a path of destruction.

This unusual event took place on May 4, 1922 and is often referred to simply as 'Austin twin tornadoes'. What’s so unique about this set of tornadoes is that they took a northeast to southwest path, which goes completely against the typical southwest to northeast path of a storm.

However, it was the same type set up as the devastating Jarrell Tornado in 1997. 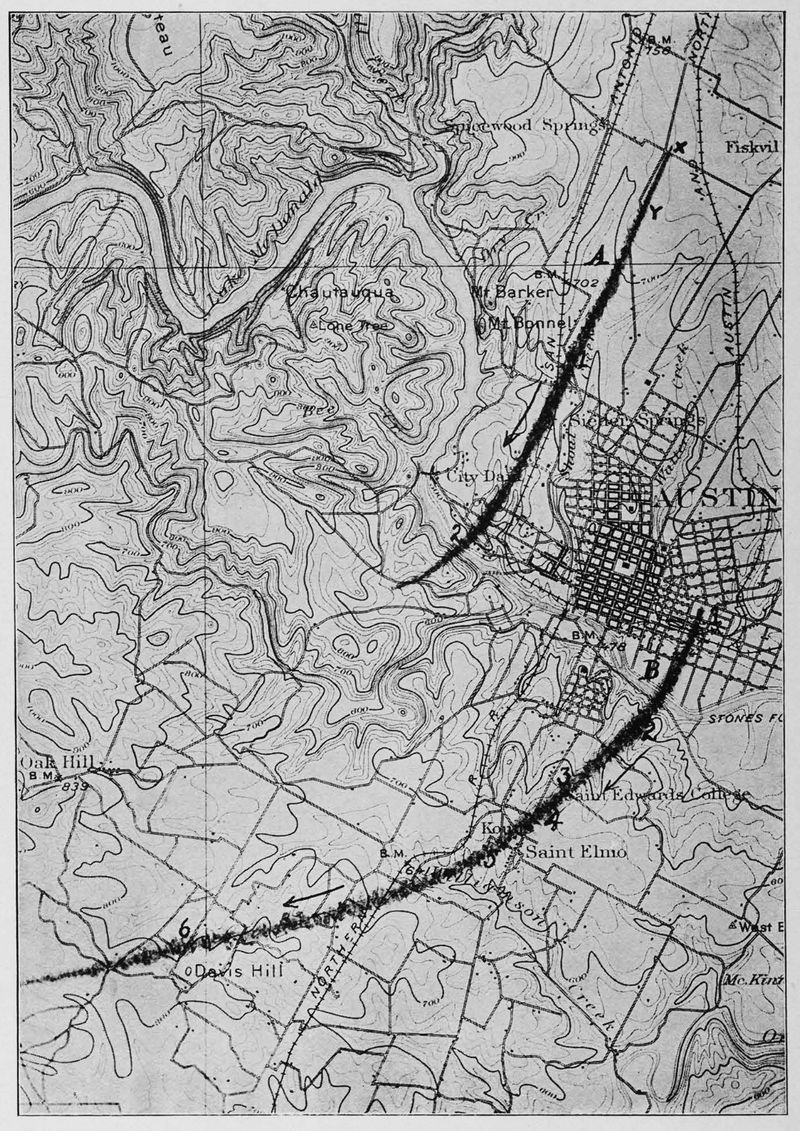 According to Fred Morris, the U.S. Weather Bureau’s Cooperative Observer at the time, the morning started with clear skies, muggy conditions and very light winds. By midday, cumulus clouds started to form with a light south to southeast surface wind.

By the early afternoon, towering cumulus clouds began to develop, and by 3 p.m., there were reports of very dark clouds taking over along with lightning.

Then, shortly after 3 p.m., the two tornadoes touched down. One was on the north side of the city and the other on the south side.

This storm was the weaker of the two and was rated an F-2 on the Fujita Scale. It developed in north Austin and traveled south towards the University of Texas, and eventually moved down to the Colorado River.

It destroyed homes, heavily damaged a state building and blew down cabins at Deep Eddy swimming hole. The tornado led to one death, seven injured and $25,000 in damages, or close to $400,000 in 2021 dollars.

This tornado was rated a very strong F-4. It first touched down in East Austin just north of the river and took a south-southwest path as it intensified.

It crossed First and Waller Streets, where it toppled a moon tower near the city fire station. Then, it traveled through Travis Heights, over St. Edwards University and the manufacturing plant at Penn Field.

It continued its destruction down Congress Avenue near the St. Elmo community, turned west over Manchaca and then into rural farmland near Oak Hill.

Back in the 1920s, downtown Austin was pretty populated with about 35,000 people, but once you got about 2-3 miles from the river, everything turned into farmland. That’s why there were not more deaths from the so-called 'Eastern Storm'.

The Bargsley family owned one of the farms near Davis Hill, where six of the 13 deaths occurred. In fact, there is a small cemetery in that area, which is now Longview Neighborhood Park in South Austin. Two of the headstones have the date May 4,1922.

Sometimes while hiking through the Stephenson Preserve you will find old pots, pans and debris from what I believe was the tornado. One person has even created art installations with the debris throughout the trails.

Can you imagine if this tornado happened today? It would be devastating.

Austin’s metro population is now up to a booming 2.3 million people.