Laura made landfall over Cameron, Louisiana early on Thursday morning as a powerful Category 4 storm, making it one of the strongest hurricanes to make a U.S. landfall in recent memory.

Thursday's daylight started to show the damage coming out of the area. Fourteen deaths have been reported so far.

Despite Laura being a post-tropical cyclone now, the storm could still bring a flood, wind, and severe weather threat to parts of the Eastern Seaboard.

Laura officially made landfall as a high-end Category 4 hurricane at 1 a.m. CT on Thursday morning near Cameron, Louisiana, making it the strongest hurricane to make landfall on Louisiana since 1856.

Laura's maximum sustained winds were estimated to be 150 mph, putting the storm into rare territory in terms of landfalling U.S. hurricanes.

At 1 am CDT, Hurricane #Laura has made landfall in southwestern Louisiana near Cameron as a category 4 #hurricane. Maximum sustained winds were 150 mph, with a minimum central pressure of 938 mb. Potentially catastrophic impacts will continue. More: https://t.co/tW4KeFW0gB pic.twitter.com/GVWRnmGejy

On Wednesday morning and ahead of the storm, the National Hurricane Center referred to the storm surge threat from Laura as "unsurvivable." Up to 20 feet of storm surge was expected to flood much of southwestern Louisiana and far southeastern Texas. The governors of both Lousiana and Texas preemptively declared disaster orders.

More than 650,000 people were without power on Friday.

Before and After Images

Aftermath of Hurricane Laura at a gas station in Lake Charles, LA.

Laura continues to track towards the east, and it continues to bring a threat for heavy rain.
States in the path of Laura could see an additional 1 to 2 inches rain. This could cause flash flooding, and streams, creeks, and rivers could overflow.
Be aware of your surroundings, and remember to never drive through a flooded roadway.
As Laura's remnants merge with a cold front, the threat for tornadoes could redevelop across the eastern U.S.
Gusty winds and hail will also be a possibility. 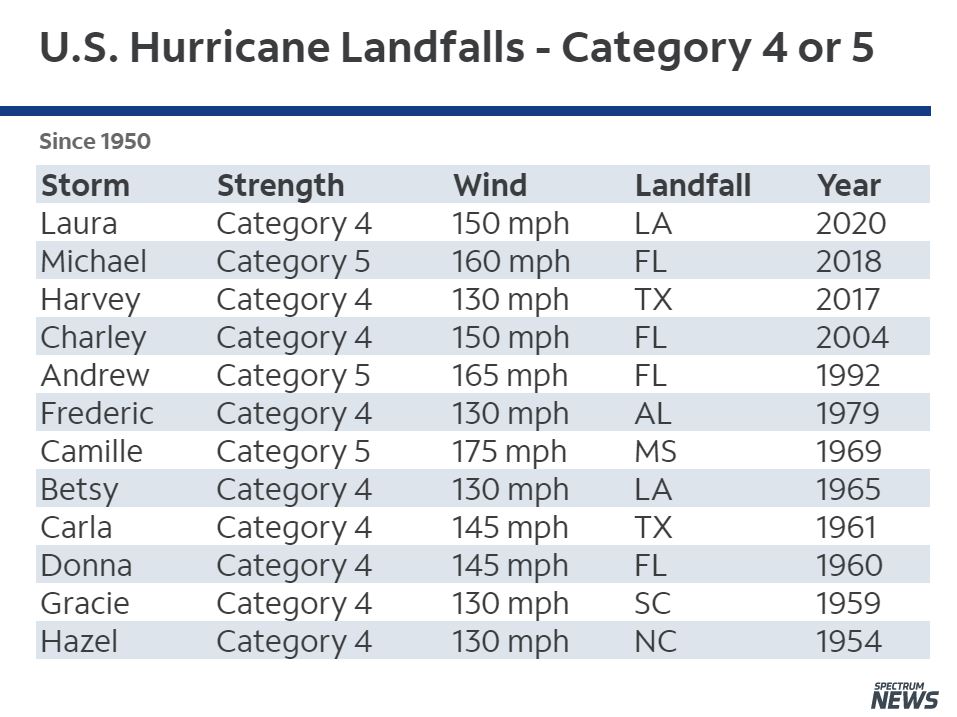 Since 1851, Louisiana has had only three Category 4 hurricanes make landfall, according to Colorado State Univeristy hurricane researcher Dr. Phil Klotzbach.

No Category 5s on record have hit the state, according to Klotzbach.

Since 1894, Louisiana has only seen one Category 4 landfall, Hurricane Betsy back in 1965.

Laura tied for the strongest hurricane to make landfall in the state of Louisiana, alongside the Last Island hurricane of 1856. Klotzbach also noted that Laura is the strongest August Gulf of Mexico hurricane since Hurricane Katrina in 2005.

These storms follow what has already been a record-setting season in the Atlantic.

With 13 storms already this year, this is the fastest start to an Atlantic hurricane season in recorded history. This is also the most Atlantic named storms on record to make landfall in the continental US by the end of August. Laura was the seventh storm.

As Laura continues on, here are five things you might not know about hurricanes.

The climatological peak of hurricane season is in mid-September. We're watching two disturbances in the Atlantic that have a chance of developing in the next five days.

If they do develop, the next names on our list are Nana and Omar.