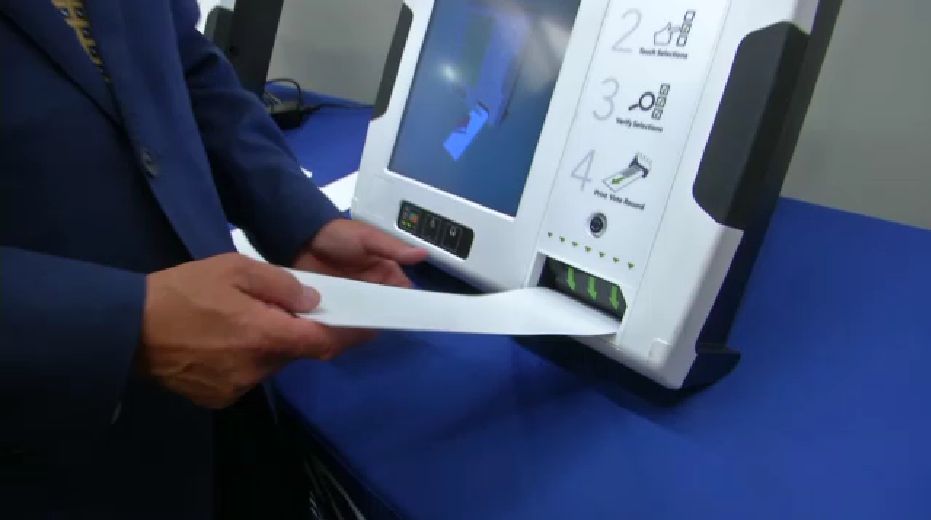 A ballot card is inserted into the device to be marked in this image from Aug. 7, 2018. (Carlos Garcia/Spectrum News)

TRAVIS COUNTY, Texas -- Voters are getting new voting machines which feature a paper trail for added security. County commissioners unanimously approved a $9.7 million contract for the state-of-the-art "Express Vote" system. They'll be ready tp use by the November 2019 elections.

“It's an electronic voting system that gives them fast and accurate results with a paper trail,” said Travis County Clerk Dana DeBeauvoir.

These express vote machines operate with a blank activation card.

“When a voter approaches the unit they’ll simply insert their activation card. From this point forward it’ll act like a touch screen system like they’ve got now. They touch the screen to make their choices,” said Bryan Hoffman with Election Systems and Software.

“Once the voter has confirmed their choices on the physical card they’ll go over to a ballot box and deposit it in there where it’ll be scanned and tabulated at that point," Hoffman continued.

Election officials say these devices aren’t connected to the internet and cannot be hacked.

“This is just a ballot marking device. At this point, the machine doesn’t remember the choices I made it. If the voter wanted to verify their choices they could go to any of the units and reinsert their card. A review screen will then pop up,” Hoffman said.

For Travis County's chief election official this new equipment delivers state of the art technology and peace of mind.

"What this system will do is create an electronic copy from the paper. That's the most important part of the security," DeBeauvoir said.

The Express Vote machines are currently used in 145 Texas counties and 43 states.