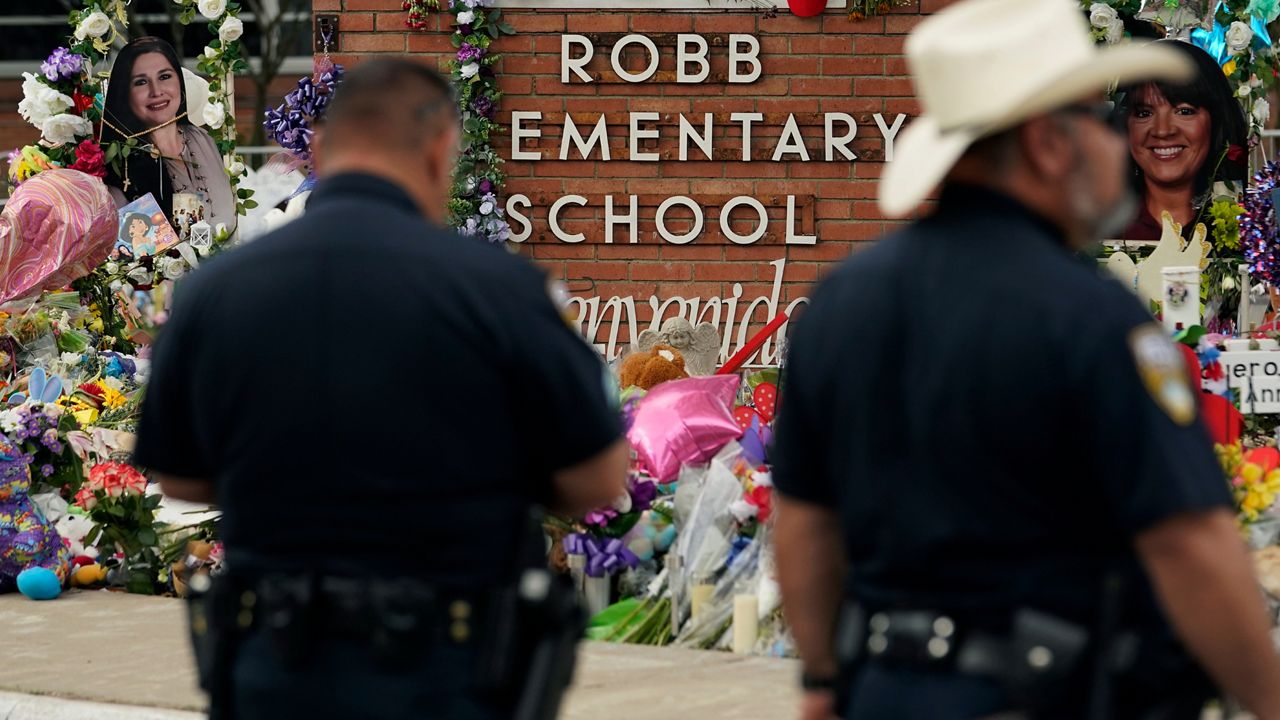 AUSTIN, Texas — A Texas House committee’s report on the Uvalde School Shooting reveals that the school shooter displayed a number of concerning behaviors leading up to the massacre. He researched the mass shooting that happened days earlier in Buffalo, New York, and he was obsessed with earning notoriety himself.

Spectrum News will not name the attacker in this report.

As soon as he turned 18, the report says the attacker purchased two AR-15-style rifles, 60 magazines, and more than 2,000 rounds of ammunition–worth more than $5,000. The teenager had no criminal history, and after a background check, qualified for the gun purchases. He told people he was going to do something soon that would land him in the news. One school safety expert said that’s common.

“Seventy percent of them actually discuss what they’re going to do in advance,” said Curtis S. Lavarello, the executive director of the School Safety Advocacy Council. “We have to really be very cognizant of that and make sure we have crisis teams in the schools that are addressing it.”

But in the case of the Uvalde attacker, nothing was done, even though he told people privately that he was purchasing weapons and considering committing suicide. There were several more warning signs during his childhood.

The shooter had a speech impediment and was bullied in fourth grade at Robb Elementary School. He had a rocky relationship with his mom and punched holes in walls after arguing with her. After one of these fights, the report says he moved out and started sleeping on the living room floor of his grandmother’s house. The report also says he may have been sexually abused by one of his mother’s boyfriends.

The attacker even told a friend about his new guns and ammunition in a text exchange. Photos in the report show the person replied, “Givin me school shooter vibes.”

“I think the most important thing we know about events, like school shootings, is that the average shooter displays somewhere between four and five problematic behaviors, such as violence [and] interpersonal problems prior to the shooting. A lot of times there are some kind of red flags that something is going on,” said Dr. Laura Prater, a research assistant professor in the Department of Psychiatry and Behavioral Sciences at the University of Washington.

None of this behavior was ever reported to law enforcement, per the report. Dr. Prater said if Texas had an extreme risk protection order law, also known colloquially as “red flag law,” there might have been a clearer pathway for relatives to report his behavior and prevent him from purchasing or owning guns. She also said raising the purchasing age of a semi-automatic weapon from 18 to 21 could have helped prevent the Uvalde massacre.

“There needs to be established pathways so that even his family members would know that if they approached law enforcement and said, ‘You know, I’m really worried about this person acquiring guns, or making violent threats,’ and then there’s an established pathway to have firearms removed in ERPO states,” Dr. Prater said. “And then at the school level, I think providing counseling earlier on, checking in more frequently, especially when he began to miss school, making home visits. Things like that could have happened earlier and throughout the years.”

The next legislative session in Texas begins Jan. 10. Nicole Golden, the executive director of Texas Gun Sense, says the organization has tried to pass ERPO laws in the state previously. None have passed.

“The fight is not over,” Golden said. “We want to continue to push that forward, especially because that work that we did, that was before Uvalde. And there’s even more interest and more immediate need, an urgency, and a lot of support in the public for something like this.”

Even without an ERPO law in Texas, Dr. Prater said the burden to report concerning behaviors relies on relatives, friends and school officials. She said schools need to have an open communication policy so people will feel comfortable speaking up about their concerns.

“Perhaps, had they done that, or had there been some sort of intervention earlier, we could have, you know, directed his path differently in life,” said Dr. Prater.

Lavarello agrees. He also said if school police, coaches, counselors and teachers take on the role of a mentor, rather than an authority figure, students might speak up about tough topics more frequently.

“Communication in a school is crucial,” Lavarello said. “In the whole school safety picture, you want to have all those avenues for kids to talk and communicate, because if they do, you know, that’s going to bring us to a better place.”