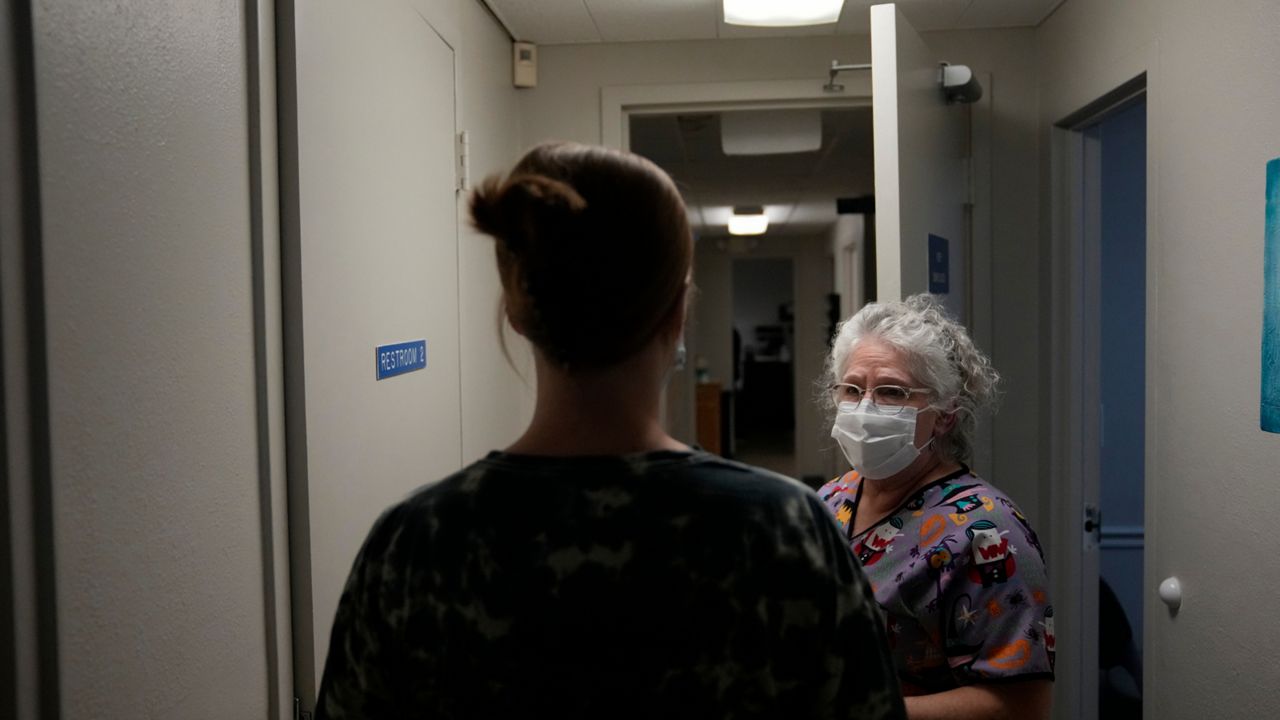 A 25-year-old woman from Texarkana, Texas, whose husband and nursing toddler waited outside in their car, is guided by lab technician Stephannie Chaffee as she goes to meet with a doctor to be given pills and guidance for a medical abortion, Saturday, Oct. 9, 2021, at Hope Medical Group for Women in Shreveport, La. The nation's most restrictive abortion law is driving many women from Texas to seek services in neighboring states. The woman said she was already five weeks along before she realized she was pregnant, and she knew it would be impossible to schedule the required two visits at a Texas clinic. (AP Photo/Rebecca Blackwell)

Interstate travel for abortion is legal, but for how long?

AUSTIN, Texas — The abortion provider Whole Woman’s Health (WWH) is trying to raise $750,000 to buy property in New Mexico. Amy Hagstrom Miller, WWH’s president and CEO, said it’ll take a month or two before her team finds a building to purchase and renovate into an abortion clinic.

WWH shut down every location in Texas. It can no longer provide services due to the Texas abortion ban. Miller said New Mexico is the closest state where Texans can go to get a safe, legal abortion.

“It's maddening to us at Whole Woman's Health that were put in this position, that we didn't make the choice to close our clinics. We were forced to stop providing abortion services in Texas,” Miller said.

Most abortions, minus a few exceptions, are illegal in Texas. WWH will not provide any kind of abortion care in Texas anymore (this includes abortion medication via mail). Miller explained WWH will now help Texans from states where abortion is legal.

“Texas law doesn't affect people beyond Texas' borders,” she said. “And that would be unprecedented for the administration and politicians to go after people for travel. We live in the United States of America, and Texas is part of the U.S. Abortion is still legal in over half the states of the United States. People cross borders for many reasons.”

Still, questions have been raised about the legality of a woman traveling beyond Texas borders to obtain an abortion. Joanna Grossman, a law professor with Southern Methodist University, says no law prohibits Texans from crossing state lines, even for abortions.

“Now, for any individual person right now, if they were to leave the state to get an abortion that is clearly not prevented or prohibited by any of these Texas laws,” Grossman said. “It's a little less clear whether people in Texas who helped women leave Texas for an abortion, whether they might face some legal risk. And it seems pretty clear that people from outside of Texas who received women from Texas or even help them get out of Texas, probably are not going to run afoul of any of the resulting rules.”

Both Miller and Grossman anticipate a push for stricter laws come January, when the Texas legislative session begins.

“I think we will see efforts to criminalize and threaten and intimidate patients who seek abortion care and people who provide abortion care,” Miller said.

Joanna agreed, saying she’s not sure what Texas lawmakers will push for, but nonetheless added, “I think you can expect that there will be additional efforts to prevent interstate abortion care.”

For Miller, the decision to shut down four Texas clinics has been an emotional one. She said WWH employed 30 staff members in Texas, plus 17 physicians. The move to New Mexico impacts each of them differently; some might stay employed by working remotely, others have been laid off, and the rest are being offered relocation packages.

“It’s heartbreaking,” she said. “[They] have all been displaced from the work that they love. And they are highly trained experts who are really dedicated, really compassionate folks. And so it would be great if they could continue this work in places where abortion is protected.”

In addition to the pain she feels for WWH employees, Miller is devastated by the Texans, who no longer have access to abortion.

“How dare our country turn against us. I mean, we are over half the population. And fundamental equality and autonomy is what safe abortion brought women in this country,” Miller said. “We can’t stand for this two different Americas that’s emerging, where, depending on where you live, you have different rights and different access to health care. I hope we can work together to build the future that we know Texans deserve.”