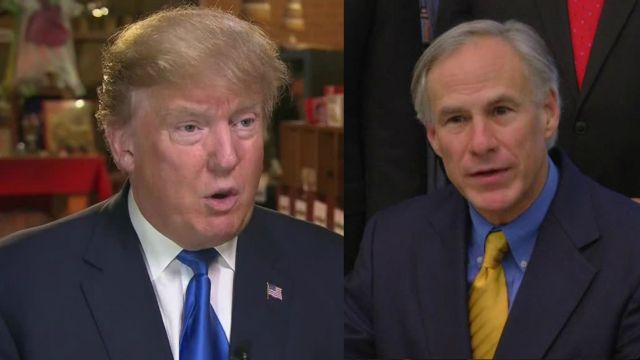 WASHINGTON -- Texas Gov. Greg Abbott received a $35,000 donation to his successful gubernatorial campaign from Donald Trump. This after a Texas probe into Trump University was dropped in 2010, according to the Associated Press.

The AP reported that Abbott, a Republican, was serving as Texas Attorney General at the time, and opened a civil investigation of "possibly deceptive trade practices" into Trump University, but quietly dropped it when the organization agreed to end its operations in Texas.

Trump subsequently donated $35,000 to Abbott's successful gubernatorial campaign, according to records obtained by the AP.

The AP reported that a spokesman for Abbott declined to comment.

Trump University guides unsealed this week by a federal judge in southern California undercut Trump's portrayal of his one-time real estate seminar course as an uncontroversial operation. Instead, the manuals reflect boiler-room sales tactics -- the proceeds of which went largely to Trump.

The manual for the staff at Trump University events was precise: The room temperature should be 68 degrees. Seats should be arranged in a theater-style curve. And government prosecutors had no right to see any documents without a warrant.

Instructing employees how to stall law enforcement investigations might seem like an unusual part of running a real estate seminar company. But at Trump University -- which drew investigations by Democratic and Republican attorneys general alike -- it was par for the course.

One guide encouraged staff to learn prospective enrollees' motivations in order to better sell them on products: "Are they a single parent of three children that may need money for food?" the guide asked. When people balked at paying for expensive courses, the suggested response for Trump University staff was harsh.

"I find it very difficult to believe you'll invest in anything else if you don't believe enough to invest in yourself and your education," the guide offered as a recommended response.

Those who bought into Trump University ended up paying as much as $34,995 for what was purported to be private mentoring with supposed real estate experts -- some of whom Trump himself later acknowledged were unqualified.

Schneiderman is suing Trump over Trump University in separate but similar case.

"He was clearly in charge of pitching this scam university to people," said Schneiderman.

With past Trump-affiliated business failures and controversies, Trump has often distanced himself by noting that his only financial involvement was a branding agreement. In the case of Trump University, however, Trump's ownership is not in dispute — Trump wanted the business for himself.

When future Trump University President Michael Sexton pitched Trump on the deal, he wanted to pay Trump a flat fee in a licensing deal. Trump rejected that, Sexton said in a deposition.

Trump "felt this was a very good business, and he wanted to put his own money into it," said Sexton, who ended up receiving $250,000 a year from Trump to run a business in which Trump held more than a 90 percent stake. The design of the Trump University operating agreement "was entirely in the hands of the Trump legal team," Sexton said.

Other court records and depositions showed that Trump and senior members of the Trump Organization were responsible for reviewing and signing all checks — and that Trump withdrew at least $2 million from the business.

Trump reviewed the advertising for Trump University's courses, Sexton said. And he did not believe Trump ever looked at what the three-day seminars included.

"Mr. Trump is not going to go through a 300-page, you know, binder of content," Sexton said.

The impression of Trump's involvement given to potential customers was quite different, according to a script for Trump University telemarketers.

"You know who my boss is, right?" the script reads. "Mr. Trump is on a mission to create the next wave of independently wealthy entrepreneurs in America. Is that YOU?"

Trump has defended Trump University by citing surveys in which 98 percent of students reported being pleased with the program. But those surveys took place before students had experienced the full program and were not anonymous, plaintiffs lawyers have said. A higher percentage demanded refunds later.

As scores of students complained that Trump University was a ripoff, the Better Business Bureau in 2010 gave the school a D-minus, its second-lowest grade. State regulators also began to take notice.

Besides the probe that led to Schneiderman's suit, and Abbott's investigation, Florida Attorney General Pam Bondi briefly considered joining with Schneiderman in a multi-state suit against Trump University.

Weigh In On Facebook: Is it inappropriate for an attorney general to take a campaign donation from someone their office was once investigating?

Three days after Bondi's spokeswoman was quoted in local media reports as saying the office was reviewing the New York lawsuit, the Donald J. Trump Foundation made a $25,000 contribution to a political fundraising committee supporting Bondi's re-election campaign.