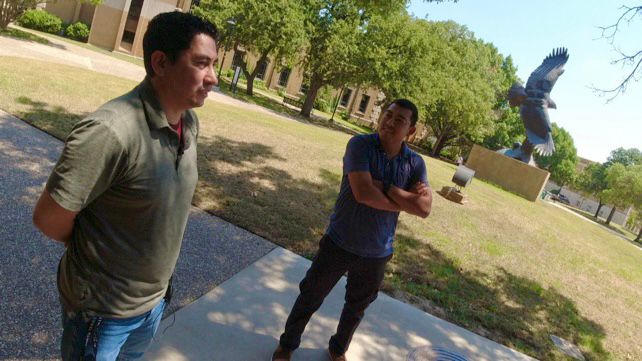 Manuel Reiz and Jose Robledo talk about their journey to becoming doctoral students at the University of North Texas. (Spectrum News 1/Brian Scott)

DENTON, Texas — The University of North Texas is one of 7 Texas colleges joining a group of 20 nationwide to bring more people of Hispanic origin into research and higher education in the next 8 years.

“Hispanics are the largest minority group in the United States and are now 17% of the workforce, yet they continue to be underrepresented in higher education. No group is better positioned than we are to expand the pathway to opportunity,” said Heather Wilson, president of The University of Texas at El Paso and chair of the alliance, in a news release announcing their formation. “We believe we are stronger together than as individual institutions acting alone.”

The UNT president said representation is really key in education, and creating mentors of all backgrounds that can better connect with underrepresented students is an important piece of the puzzle. He said most times, students they’re trying to reach don’t even realize that the opportunity is out there or that they can achieve it.

That was the case for Manuel Reiz and Jose Robledo, who are now lab partners and each about a year away from their biology doctorates at UNT. Reiz said he spent most of his youth in Mexico before moving with his family to Houston. He’s now the first in his family to get a college education.

It’s a similar case for Robledo, who is also a first generation college student.

“I was raised harvesting cucumbers and peppers,” said Robledo.

With a lot of hard work and through scholarships, the two men could break the mold. They said the encouragement and guidance of Hispanic mentors in college helped them get started on the path to their doctorates — and to a future in solving the problems of the world.

Besides researching, the two men said they now plan to pay back the mentoring they received by becoming professors themselves.

“We wanna go into academics,” said Reiz. “Prepare the next generation of scientists.”

“Makes it just a way of giving back, giving back to my own community,” added Robledo.

Their story is what President Smatresk and the other university leaders in the coalition hope to create more of.

“You can’t pick jobs you’ve never heard of. So we need a support structure that says, you know, there are great jobs being researchers, there’s great jobs being college professors and you can enjoy, if you’d like, the life of the mind,” said Smatresk.

According to the news release on the group’s formation, the university leaders plan to work together under several grants to create new opportunities and work toward changing the current dynamic.