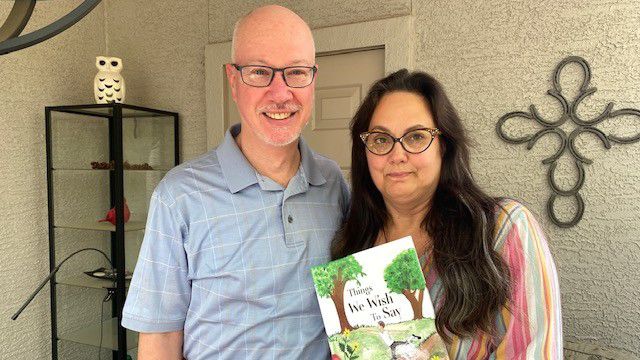 Eric and Anna Bauereis pose with a book written by Anna dedicated to their son who was killed by a distracted driver on a Texas road in 2016. (Spectrum News 1/JJ Maldonado)

AUSTIN, Texas — Last year marked the second deadliest year on Texas roads, according to the Texas Department of Transportation.

“Last year 4,480 people lost their lives in traffic fatalities on Texas roadways,” Brad Wheelis, spokesperson for TxDOT, said. “Many of those could’ve been prevented. It was the second deadliest year since we started keeping records back in 1940.”

TxDOT says the increase in fatalities in the Lone Star State are reflecting a trend nationwide. According to TxDOT, an estimated 20,160 people died in car crashes in the first half of 2021, up 18.4% from 2020.

TxDOT is attributing the deaths to a variety of factors, including driver behavior such as speeding, distracted driving, and not wearing a seat belt.

“Driver behavior is one of the causes, but also one of the most important solutions,” Transportation Commissioner Laura Ryan said.

One Austin family has been advocating for safer streets. Anna and Eric Bauereis’ son Alexei was killed on an Austin road in June of 2016. Alexei was crossing the street walking a friend home when he was struck by a distracted driver.

“It really destroys people,” Bauereis said. “If your youngest son was taken from you for no reason, it really messes with you and drops you into a hole.”

The Bauereis say they have been able to work on getting the city to alter the light signal where Alexei was killed by removing the yellow blinking lights. However, at the time of this article, the crosswalk’s white painted lines were no longer visible. April also marks Distracted Driver Awareness Month.

“Those moments when a memory brings you to tears happens less and less, but they still happen and it’s been six years,” Bauereis said.

TxDOT says while it's working on making improvements to roads such as adding rumble strips to the side of roadways and cable barriers in the medians, they want to remind drivers to do their part as well.

“Slow down, drive to conditions, don’t speed, avoid distractions behind the wheel and of course always buckle up,” Wheelis said.