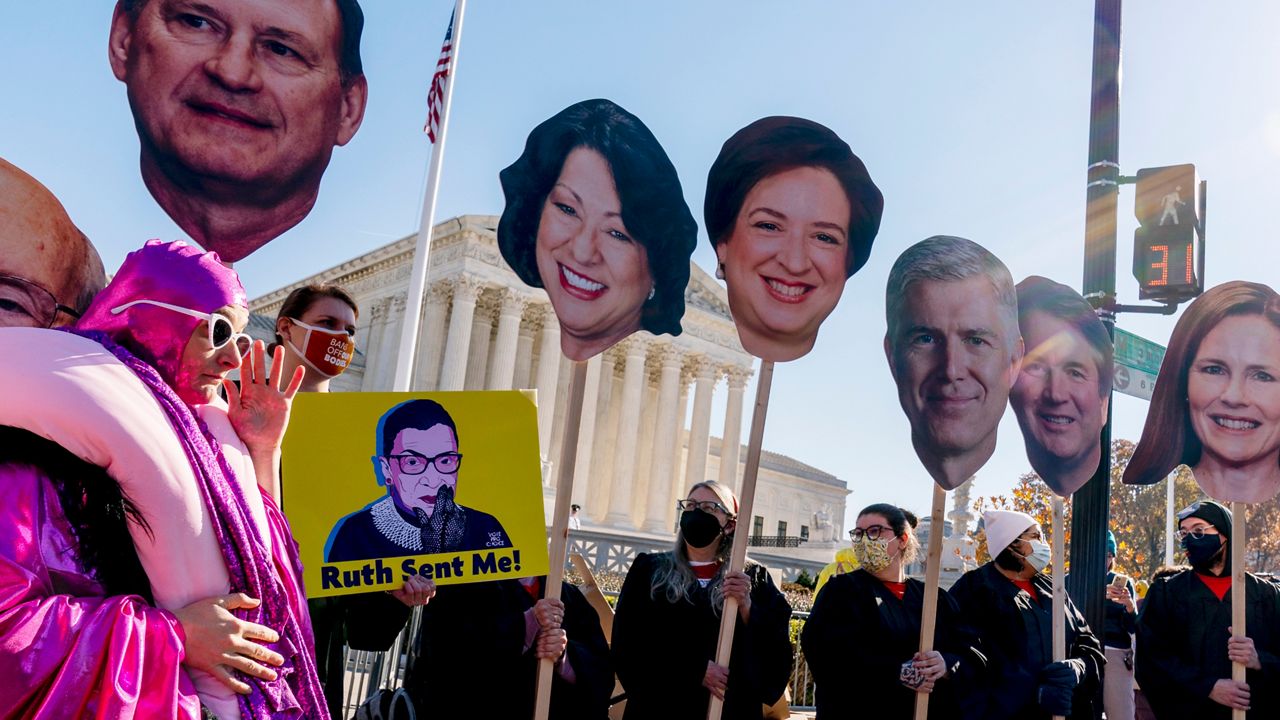 WASHINGTON D.C. — The future of abortion rights is now in the hands of the U.S. Supreme Court, and the decision would have significant implications for Republican-led states like Texas that have tried to chip away at a long-held constitutional right.

The Justices on Wednesday heard nearly two hours of legal arguments about Mississippi’s ban on abortions after 15 weeks of pregnancy, a case that could lead to overturning nearly 50 years of Supreme Court precedent.

While the case involves a Mississippi law, the hearing drew Texans to Supreme Court steps for demonstrations because of the potential implications for the new abortion restrictions that became law in the Lone Star State.

“This was an egregious decision back in 1973 and [there are] many reasons why this should be overturned,” said Jeff Bradford, president of Human Coalition.

The Texas-based organization runs clinics and advocates for alternatives to abortion.

“This is an incredible day here in Washington, D.C. and, you know, this could change history,” he adds.

Earlier this year, the justices declined a request to block the Texas law while the legal battle over its constitutionality plays out. That law bans most abortions after six weeks of pregnancy, and the court’s decision not to stop it sent a signal its new conservative-majority was ready to scale back abortion rights guaranteed under the landmark 1973 decision, Roe vs. Wade. Texas Republicans this year passed a trigger law that would make performing an abortion a felony 30 days after Roe is overturned.

“People deserve access to safe abortion care. People shouldn't be denied that care just because of somebody else's political beliefs,” said Amy Hagstrom Miller, founder and CEO of Whole Woman's Health which provides abortion care in Texas. "Our staff are now having to say no to people that we are trained and committed to help, but for this law, we have to turn them away," Hagstrom Miller said.

In Roe, the Supreme Court ruled states cannot block abortions before roughly the 24th week of pregnancy considered the point when a fetus is viable outside of the womb. If justices uphold Mississippi’s 15-week abortion ban, it would overrule its own precedent. Chief Justice John Roberts, appointed by former President George W. Bush, seemed open to doing that.

“Viability, it seems to me, doesn't have anything to do with choice. But, if it really is an issue about choice, why is 15 weeks not enough time?” Roberts said.

But the liberal justices warned about the potential consequences of doing so.

"Will this institution survive the stench that this creates in the public perception, that the Constitution and its reading are just political acts?" said Justice Sonia Sotomayor.

All eyes were also on the newest members of the court, three of whom were appointed by former President Donald Trump and could be decisive votes in the case.

During her turns for questions, Justice Amy Coney Barrett kept asking about safe haven laws that do not prosecute those who surrender newborns in designated locations.

Barrett asked about several filings focused on the burden of forced parenting.

“Forced motherhood would hinder women’s access to the workplace and to equal opportunities,” Barrett said, “Why don’t the safe haven laws take care of that problem?”

Joanna Grossman, the Ellen K. Solender Endowed Chair in Women and the Law at the Southern Methodist Universitry Dedman School of Law told Capital Tonight after listening to the hearing, she believes the court’s new conservative majority signaled it would at least uphold Mississippi’s abortion restriction, but she believes they would more likely overturn Roe.

“Then pretty much instantaneously the abortion rights in the United States look like a presidential election map, which is you have red states and you have blue states, and where you live will determine what kind of rights you have,” Grossman said.

This decision on the Mississippi case is not expected until the end of the court’s term in June or July, until then they will be in privately conferences. There is also no indication of when justices will rule on whether abortion providers and the Justice Department can move ahead with their legal challenges to the Texas abortion law. In the meantime, the state's six-week abortion ban has dramatically reduced the number of abortions in the state, and those with time and resources sought the procedure elswewhere.