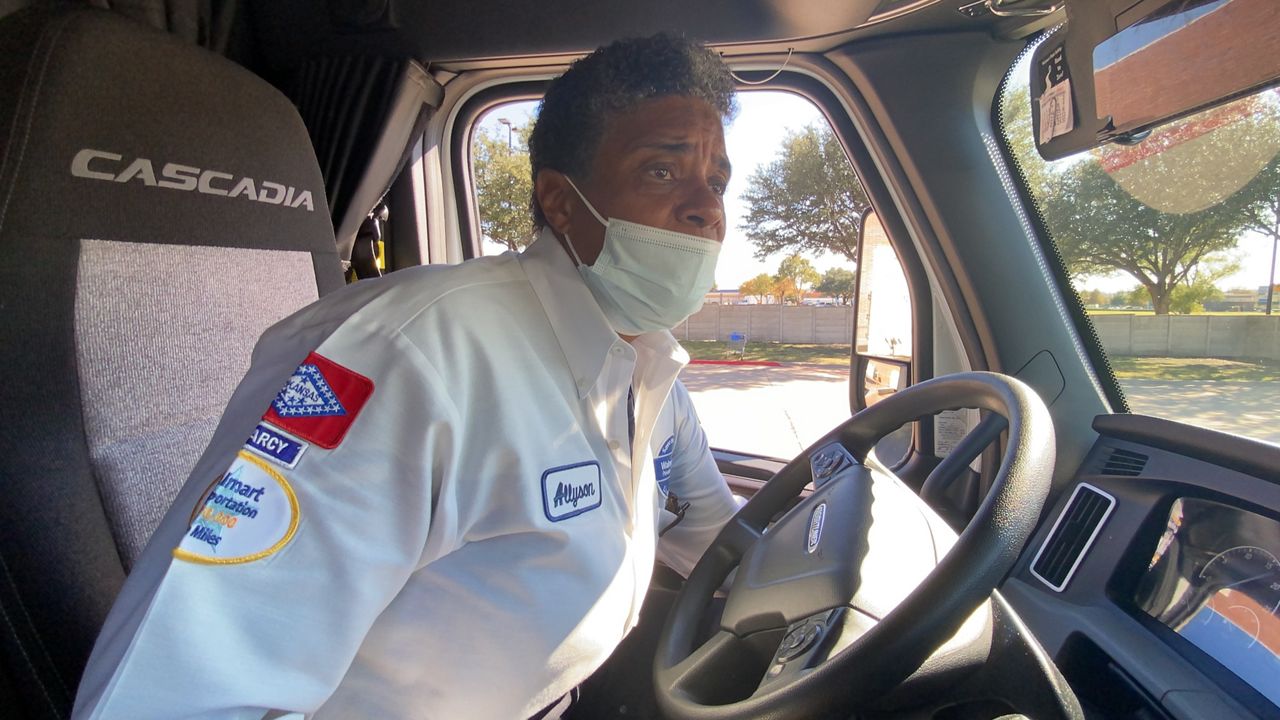 DALLAS — It's all hands on deck for supply chain industry and government leaders who are trying to ease the bottleneck constraints at U.S. ports. A bipartisan group of lawmakers is urging the U.S. Labor Secretary Marty Welsh to speed up a federal program that recruits and trains truck drivers.

The American Trucking association estimates the nation is short about 80,000 truckers.

Amid ongoing shortages women are being recruited more than ever to fill spots in the supply chain industry. Every day more than 3 million Americans hop on trailer tractors to deliver goods across the United States, however less than 10% of the workforce includes women.

"I recall when I was at a truck show and this young lady was with her partner and she was going to get in the truck with him, but he didn't want her to drive the truck," said Allyson Hay. "He wanted her to cook in the truck, and I'm like don't even think about it."

Walmart truck driver Allyson Hay is on a mission to recruit women into the trucking industry. For more than 25 years, Hay has been hauling goods from coast to coast, and one thing she's noticed at nearly every truck stop is the lack of women working in the industry.

"I was really wondering where they were," said Hay. "We're constantly moving freight in different directions. It's taken everybody, it's all hands on deck."

Despite an 88% surge of women getting behind the wheel since 2010, less than 10% make up the workforce currently. When she’s not behind the wheel, Hay serves as an ambassador for the Walmart Road Team and Women in Trucking. During her downtime she helps to recruit and show other women there's opportunity for them, too.

"All the navigation stuff I had to do 20 years ago, you don't have to do it anymore," said Hay. "Just get in and push a few buttons, and you can go."

The veteran truck driver has logged more than a million miles on U.S. highways, and said it was the best career move she ever made. While on the road Hay's sharess part of her journey through Youtube videos showing women, and others tips while on the road.

"Trucking is me, you know. I love truck driving. I feel like I have a lot to give," said Hay. "Everytime I see a female, I just smile and give them the thumbs up because we have a lot to offer to this industry."

The founder of the Women in Trucking nonprofit Ellen Voie said having more women like Hay helps destigmatize the industry that will continue to grow for years to come. The global supply chain is expected to grow annually more than 17% through 2028, according to Grand View Research.

"Beyond marketing and HR, they need to be in operations and areas that really have a bottom line accountability to the company to show what they can do," said Voie. "Women don't picture themselves in the trucking industry, and they don't know how much they're valued and needed."

The organization focuses on recruiting and mentoring women into successful careers within the supply chain industry. Asides from truck drivers Voie said women are also needed for jobs ranging from diesel technicians to board of director positions.