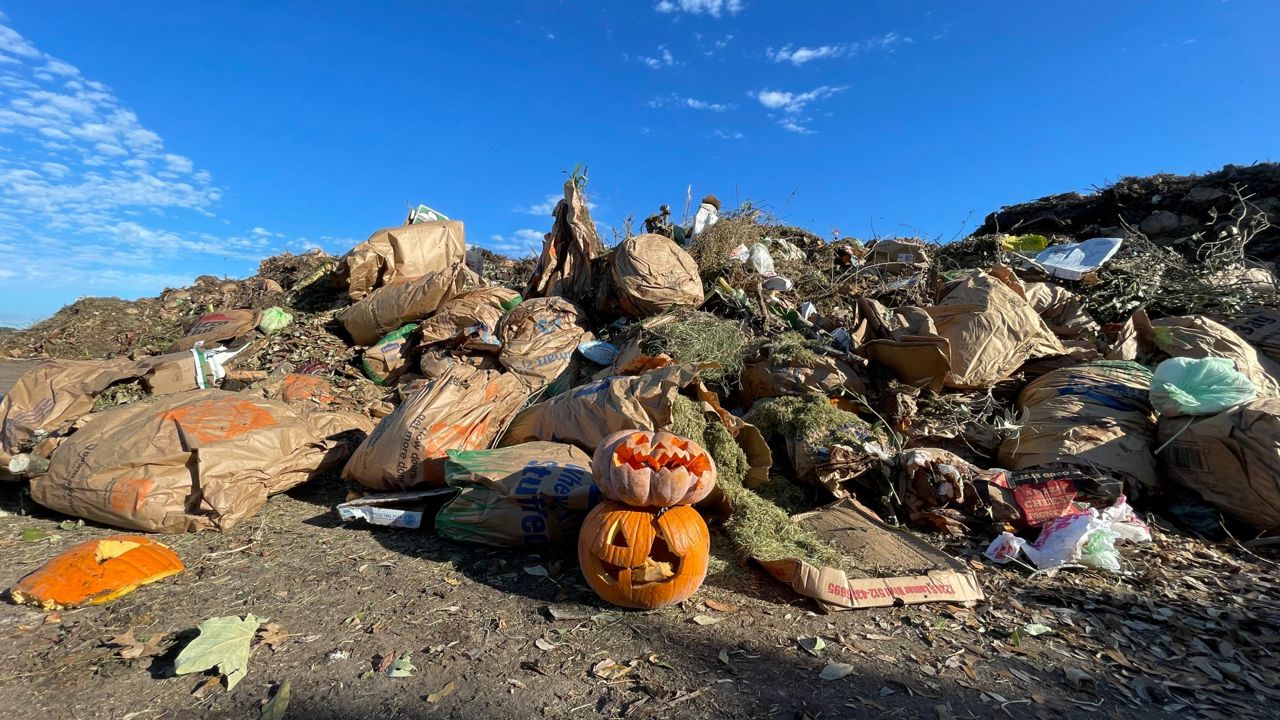 Food scraps in the process of turning into soil. (Spectrum News 1/Charlotte Scott))

It's a phrase kids are taught in school, and one we learn to live by. But recycling alone won't cut it anymore. Most plastic is rarely used twice, and our landfills are filling up. National Geographic reports that a "whopping 91% of plastic isn't recycled."

The City of Austin has big goals of diverting 90% of materials from landfills by 2040. And that effort begins with composting.

If you're unfamiliar, composting is the act of turning food scraps and other materials into a nutrient soil. It's one of the easiest ways to help the environment.

In Austin, about 210,000 single-family homes have a composting bin.

Gena McKinley is an Austin resident and employee of Austin Resource Recovery, the city department tasked with turning waste into resources. McKinley composts all her food scraps.

Composting is as simple as separating food waste from the rest of your trash and recycling. Paper bags, pizza boxes, and even Starbucks cups can also be composted.

But not all Austinites are hopping on board.

“I think sometimes people are a little confused about what can go in the cart,” McKinley said. “We definitely want to continue to work with those customers to help them learn how to use the cart effectively.”

The City of Austin has resources online to help you learn how to compost. And If you live in an apartment, you can drop off your food at a community garden.

During the holidays, homeowners are encouraged to compost pumpkins and Christmas trees instead of throwing them away.

Lots of 🎃 are already making their way to a composting facility in Elgin, TX.

Working on my next story for @SpectrumNews1TX about Austin's curbside composting service! Stay tuned. pic.twitter.com/tb8J48OyFG

The City of San Antonio has a similar curbside composting program. Dallas and El Paso do not. But a startup in the DFW Metroplex called Turn will pick up your compost for $35-50 a month, or you can drop it off at certain locations for $20 a month. In El Paso, New Green Organics will also pick up organic waste for a monthly fee, according to local media.

Trevin Patrick is the yard manager at Organics by Gosh, the composting facility that receives all of Austin’s food scraps.

The Hawaii native grew up composting.

“We had our gardens planted out of our own dirt. Hawaii’s a volcanic island, so it’s rock, you’ve got to make your own dirt,” Patrick said. “We call it ‘respect the aina,’ or ‘respect the land.’ And that’s basically what we’re doing here, just on a massive scale.”

According to Austin Resource Recovery, "Compostable material cannot break down in a landfill, as it would in nature or in a compost pile. Instead, it decomposes without oxygen, releasing harmful methane into the atmosphere."

As landfills fill up, Patrick argues that Texans should start composting now.

“It’s giving back to the environment, you know? It’s revitalizing the soil and trying to make the world a better place for the future,” he said.