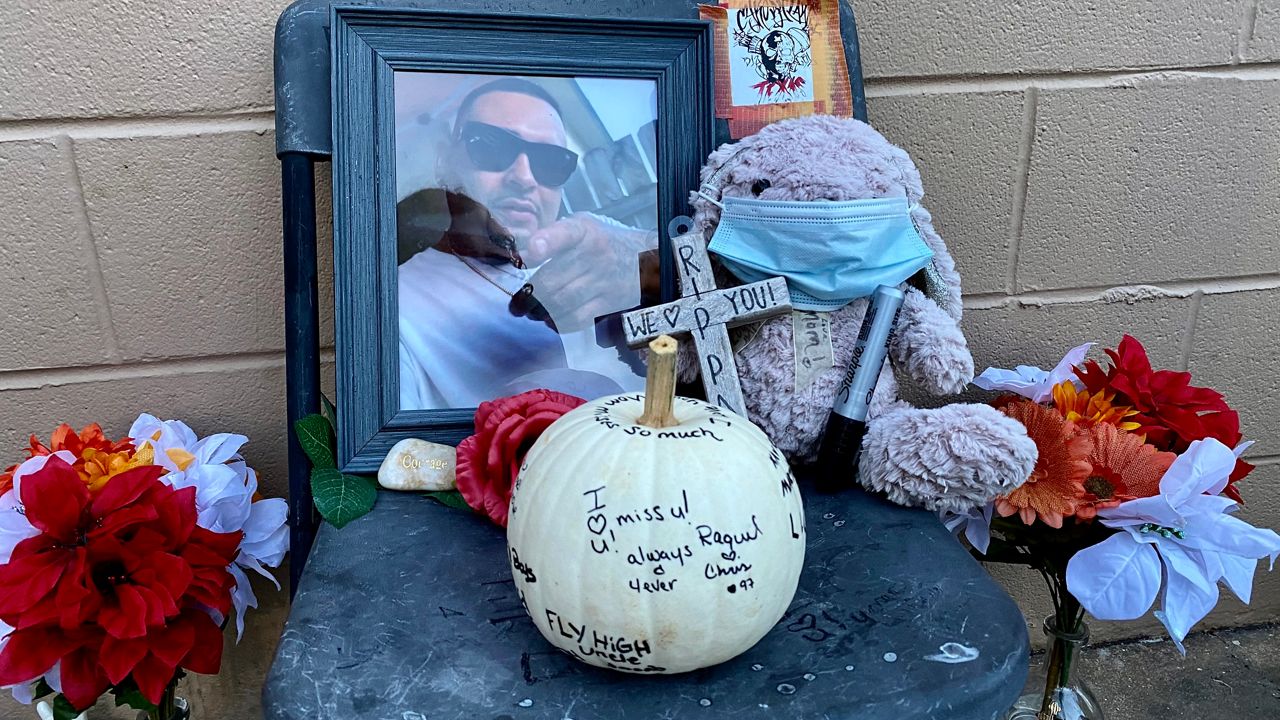 Memorial of Chris Martinez who was shot and killed in East Austin in March, 2021 (Jamil Donith)

TEXAS — Gun violence is skyrocketing across the nation, with nearly every state seeing an increase in homicides. In Texas, shooting deaths have been on the rise since at least 2015, according to state crime data.

Meanwhile, more than a dozen pro-gun laws were enacted on Sept. 1, making it easier for Texans to have a gun. Recent nationwide and state research points to a correlation between more gun laws and more gun violence.

Gun rights advocates say these laws are defending law-abiding citizens' right to bare arms. However, many in law enforcement and families affected by gun violence say these laws will only cause more bloodshed.

Joyce Martinez is part of one of those families. She and her family meet in an East Austin pawn shop parking lot every month. The same parking lot her son Chris Martinez was gunned down on Mar. 21.

“It hurts me a lot, every single day,” Martinez said.

They put up posters, pictures, memorabilia and lit candles. Tuesday’s memorial was the six-month anniversary of his death.

“He was a loving father, he was a good hardworking man, he took care of all his family, all of us,” Martinez said.

Chris Martinez is one of more than a thousand lives lost to gun violence this year in Texas.

Numbers from the Texas Department of Public Safety show firearm homicides trending up for more than six years.

As of October, shooting deaths account for about 76% of all homicides in 2021.

Texas has the lowest gun restrictions in the U.S., according to a national study on gun laws.

He says most of these laws will have no effect on who can purchase a gun, but it loosens the reins for legal gun-owners who want to protect themselves.

Cargill says he has seen a decline in people signing up for classes, but he predicts they’ll be back by choice or against their will. “If you don’t come to me beforehand and learn what the laws are, you’ll come to me afterwards and it will be court ordered,” he said.

Criminologist Professor Dr. Howard Henderson says many of these laws are aimed at something other than “self-defense.” As the Center for Justice Research Director at Texas Southern University, he’s studying how gun laws impact behavior.

“What we found through our initial analysis is that open carry laws seem to increase violent behavior in general,” Dr. Henderson said.

In a 2020 report, the RAND Corporation found concealed carry, child access and stand your grand laws are most likely to affect gun deaths. The national nonprofit research and development think-tank has conducted numerous studies on gun policy and its effects on gun violence. All their research was inconclusive on whether bans on assault weapons, firearm safety training, licensing and permitting requirements or minimum age increased gun violence.

Henderson’s research is still ongoing. He says if the original findings are correct, open carry laws will further increase the risk for Black and brown communities already disproportionately impacted by gun violence.

TDPS reports show homicide victims in Texas are a majority Black and Hispanic.

“Time will tell us more definitively whether or not these open carry laws are further decimating rising violent crime rates as we see in most cities around the country,” he said.

The same racial inequities apply to gun policies as well. State data on weapons law violation arrests in Texas show Blacks have higher arrest rates than whites, with a higher total number of arrests in 2020 and 2021.

Martinez is still fighting to bring her son’s killer to justice and to stop gun violence from tearing even more families apart. She says what her community needs is better policing not more civilians with guns.

“There’s more and more every day,” she said. “Every day we have gun violence, somebody’s getting killed.”