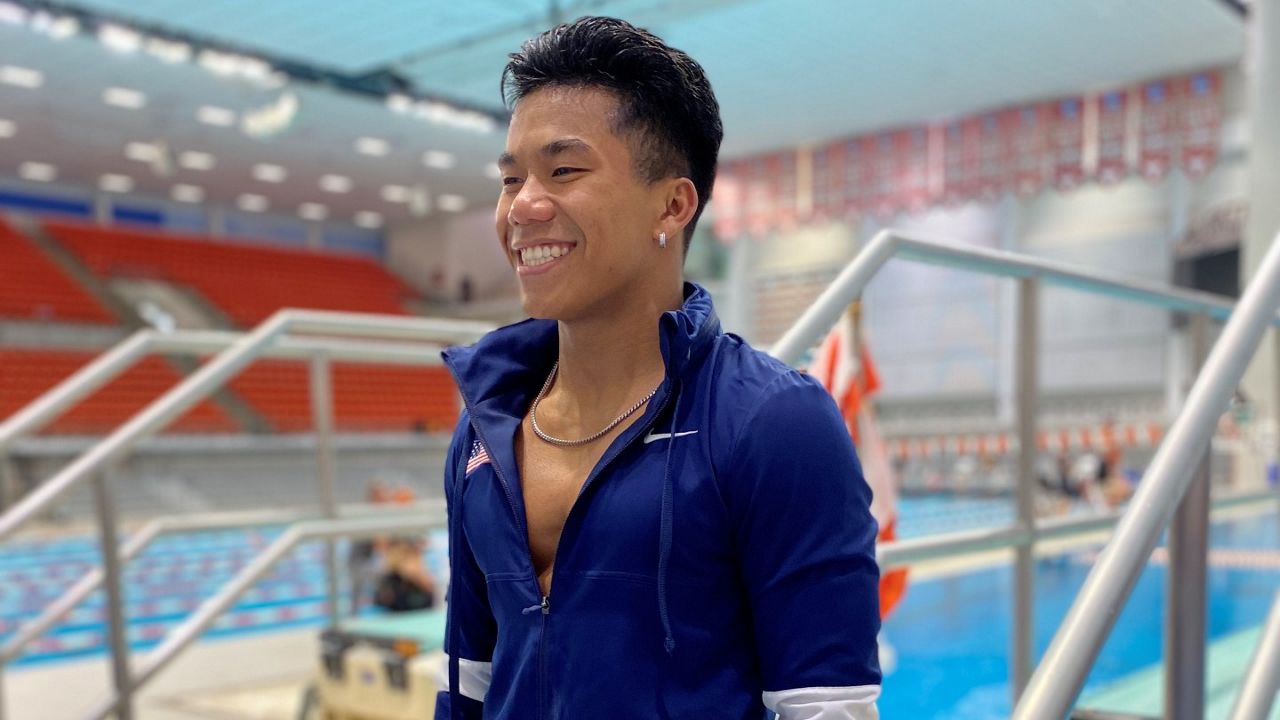 Jordan Windle appears at the Lee & Joe Jamail Texas Swimming Center on the campus of the University of Texas at Austin. (Spectrum News 1/Travis Recek)

UT diver takes an unlikely journey to the Olympics

AUSTIN, Texas — Jerry Windle always wanted to be a dad. He says it’s the one thing he wanted. But he faced obstacles in being a father as a single man, and more specifically, a single, gay man.

“Everybody told me I couldn’t be a parent,” he said.

An opportunity presented itself when Windle read an article about a man who had adopted a boy from Cambodia. He decided to look into it and received a packet of information on adopting children from Cambodia. In that packet was a picture of a young boy.

“I took a look at his photo and the second I saw this watery set of eyes staring back at, I knew that this baby was my son and I was his father,” Windle said.

That young boy had been left at an orphanage after his parents are said to have become sick and passed away. It wasn’t an easy or quick process, but Jerry Windle was able to adopt that young boy and become Jordan Windle's father.

Jerry Windle raised his son in Florida. One summer they were looking to enroll Jordan Windle in a camp but couldn’t find openings in a soccer, football or tennis camp. They came across Fort Lauderdale Aquatics and signed him up for one of the camp openings there. During that camp 7-year-old Jordan Windle tried diving and one of the coaches there immediately saw potential.

“They said if you put Jordan into diving, I can promise you he is going to be a national champion one day and he might even be an Olympian,” Jerry Windle said.

“The training started at 7 but the dream of being an Olympian started around maybe 10 years old,” said Jordan Windle.

A bold proclamation for a kid that young but one that proved to be pretty prophetic. Jordan Windle turned into an incredible diver and made his first Olympic trials at the age of 12 in 2012. He was back in 2016 at the trials and placed fourth, just missing the Olympic team.

“Watching Jordan in the air is literally like watching art happen before your eyes,” Jerry Windle said.

After 2016, Jordan Windle earned a scholarship to dive at the University of Texas and learn under longtime coach Matt Scoggin.

“I noticed his great toe point and I noticed how quick he moved and how well he twists,” Scoggin said. “He looked like he was just having fun.”

At UT Jordan Windle has become a five-time Big 12 champion, a nine-time All-American and won the national championship on the platform in 2019. All that success, but one goal was still left. After the Olympics were pushed to this year, Jordan Windler went back to the U.S. trials for the third time.

“During the competition I was so balanced and so level-headed,” Jordan Windle said. “I was just really having a ton of fun diving with everyone and I was able to perform at my best.”

He took second place in the platform competition and finally was on the Olympic team.

“I couldn’t hold back the tears in looking up in the stands and seeing my Aunt Julie and my dad crying,” Jordan Windle said. “I just wanted to make him proud and like it all worth all the sacrifices that we had to give throughout our lives.”

Jordan Windle will make his Olympic debut on the platform on Aug. 6. He will be representing the United States but will never forget his roots in Cambodia. A few years back, he took a trip there that he says was life-changing.

“It was emotional. I would see young kids just running on a street with no parents and just naked and they just don’t realize what they don’t have,” he said. “I have so much that they don’t, it hit me hard when I was there. I wanted to give them so much that I couldn’t at the time, I just wish I could do a lot more.”

“He had probably one of the most emotional responses I had ever seen him have,” Jerry Windle said. “He said, 'Dad, thank you.' And I said, 'For what?" He said, 'Thank you for changing my life and thank you for giving me the opportunity that you have me.'”