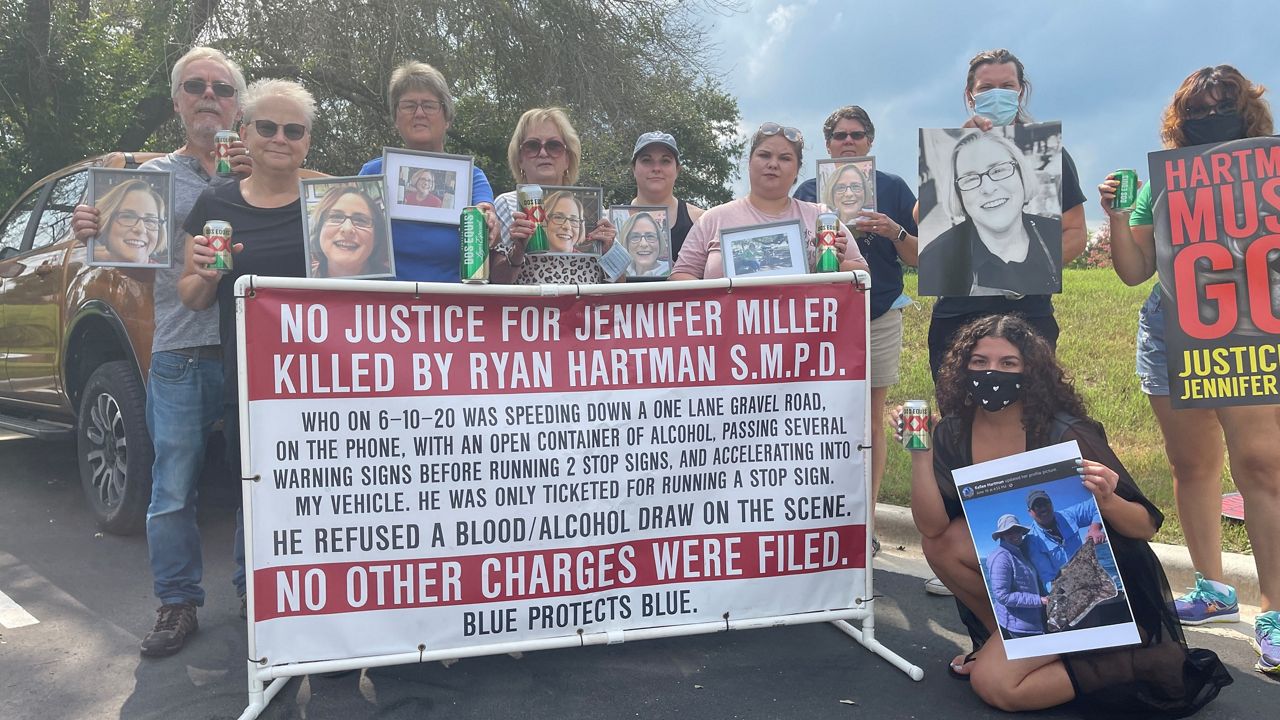 SAN MARCOS, Texas 一 Family members, loved ones, and activists marched to San Marcos City Hall seeking justice and accountability after the death of Jennifer Miller after she was in a car crash with an off-duty police officer over a year ago.

Her partner, Pam Watts, led the demonstration into the building and spoke to the media about who Miller was and how special she was to those she loved.

“Jennifer was literally an angel on Earth. So kind, so compassionate...I'm not to the point where we can lay her to rest yet. We can't bury her because there's been no accountability. I don't know how to say rest in peace. Because there is no peace,” she said.

Watts and Miller were both hit on the side of their car while driving in nearby Caldwell County last year on June 10, 2020. Miller died from her injuries. The person in the other vehicle was off-duty San Marcos Police Sgt. Ryan Hartman. He continues to serve in the force.

“I don't understand why this officer, Ryan Hartman, is still wearing a badge and representing the City of San Marcos,” said Watts.

In the body camera footage, Hartman is pulled over and Lockhart police officers speak with him. In separate bodycam footage, an officer pours out what's left of an open, 24 ounce can of beer. Hartman appears to admit to several infractions, refuses to submit to a sobriety test and is eventually taken into custody.

A later report shows Hartman eventually complied with an alcohol test and the results showed Hartman was just under the allowable drinking limit.

“The facts of the matter are still the same. He had an open container of alcohol, a 24 ounce can of Dos Equis beer. He was driving recklessly down a looped one lane gravel road that at that time was full of potholes,” said Watts, who said she is still recovering from physical injuries from the crash.

While the Lockhart Police Department came back with a recommendation for criminal negligent homicide charges two months after the incident, a local grand jury found there wasn’t enough evidence. Watts still believes Hartman could have been disciplined.

The push for accountability has grown since the incident occured last June. Watts and activists from Mano Amiga continue to hold events to honor the memory of Miller. One such event is the delivery of a calendar filled with Miller's photographs, a year's worth of memories for a year of what Watts says is deliberate inaction.

“I’m gonna keep moving forward whether that's a week, a month, a year, or 10 years. I will not accept that this is what our justice system looks like in America,” said Watts.

Social justice advocates who marched with her have been investigating Miller’s death on their own. One open records request by Mano Amiga turned up correspondence between the San Marcos Police Chief Stan Standridge and other city officials which left even more questions unanswered.

“The chief of police is acknowledging that they didn't even totally investigate within the 180 days they had to affect discipline when Ryan Hartman acknowledged that he committed all sorts of violations of the law, resulting in the death of Jennifer,” said Jordan Buckley of Mano Amiga.

Spectrum News 1 reached out to Standridge and the city attorney, but the chief declined to comment citing pending litigation while other officials have yet to return our message. We will update this story when officials respond.

Watts insists the city must act to remove Hartman from the department, and she's vowed to continue the fight.

“Right is right and wrong is wrong. Nothing has happened to this officer, and Jennifer is dead. The DA discarded her like she didn't matter and I'm here to tell them she did matter, and somebody should have done something, and I'm not accepting the fact that they didn’t,” she said.