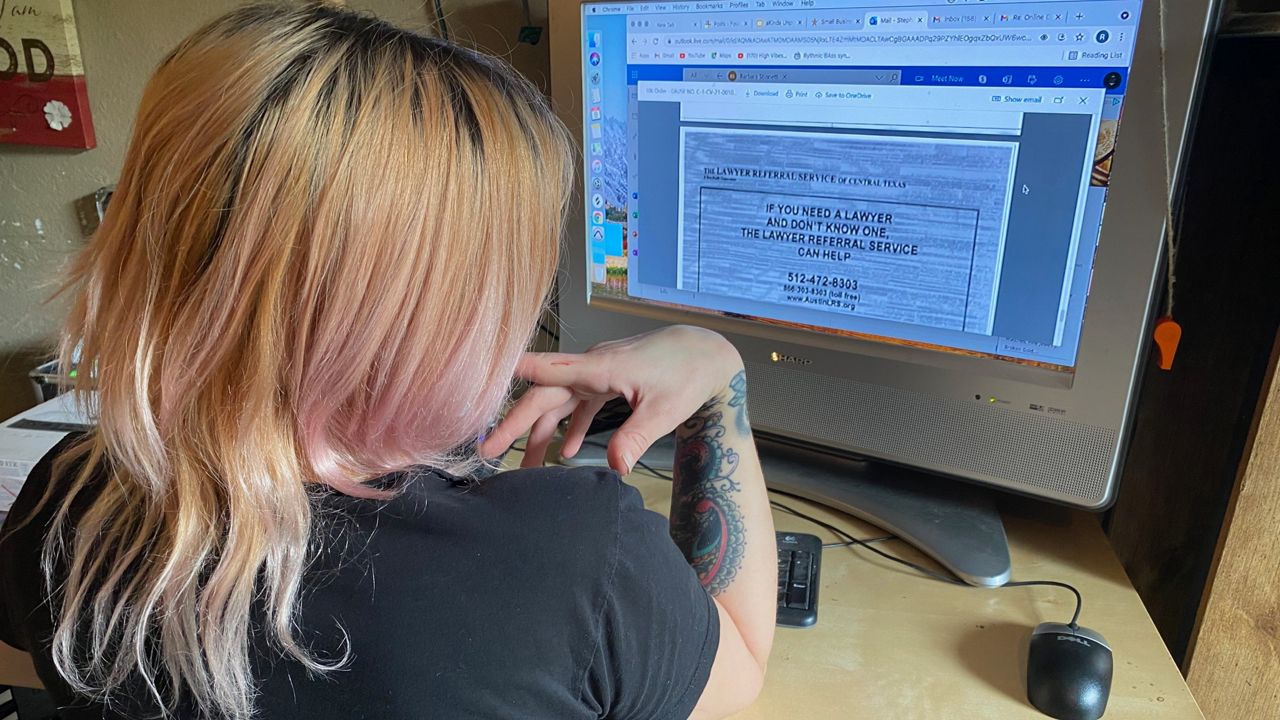 TEXAS — Eviction filings have skyrocketed in some major cities in Texas this month. Eviction tracking systems show above average evictions this month in several major cities. Now, housing advocates are dealing with more cases of renters receiving notices of eviction despite protections under the eviction moratorium.

While landlords in the Austin area are now allowed to start issuing notices of eviction to those five months behind on their rent, landlords are still telling many residents outside that requirement to move out.

Stephanie Fjetland is one of those residents.

She now sits on her living room floor going through her vintage record collection, trying to decipher which ones to sell to pay her rent.

“There’s a chunk of them I absolutely wouldn’t [sell], but some of those are the ones I think would make money,” Fjetland said.

This is just one of the many creative ways Fjetland is trying to make money.

But the Austinite wasn’t always pawning off her possession to survive. Fjetland used to be a social worker. However, after her sister’s murder in 2018, she was unable to continue working in her field.

For the past few years, she’s been working to start her own company offering mental health support online. Then the pandemic hit.

“I lost my whole family and my network, and my career,” she said. “So, I’ve spent a lot of the pandemic grieving.”

On top of that, Fjetland is now fighting an eviction.

Her landlord gave her a notice of proposed eviction back in February, and recently served her with a lawsuit for nonpayment.

“I’m protected by law. I’m within my legal right, but I’m trying to get out and maintain my credit, and my life, and my family,” Fjetland said.

“This is the first time, with some limited exceptions, that we’re really seeing people who haven’t paid rent since the pandemic started start to receive these notices,” Latta said.

Data from the Eviction Lab’s tracking system shows in June there have been 754 eviction filings in four major Texas cities.

Since March 15, Dallas, Fort Worth, Austin and Houston have had a total of 70,857 eviction filings.

“Unfortunately, because so many landlords who have not had full rent paid for so long have sometimes resorted to other tactics,” Latta said.

Here’s the twist — Fjetland was receiving rental assistance from Travis County, but the property owner wouldn’t accept the last payment.

Fjetland confirmed this by showing several emails between the property manager at her apartment and Travis County stating:

“I appreciate that you have extended your offer again to Ms. Fjetland, however our owner is not accepting funds at this time.”

We contacted property management to ask why, but got no reply.

Fjetland has submitted a declaration of protection under the CDC order, which ends in less than a month.

Her lease already ended in June, so she has been desperately trying to find a new apartment, but with her income and the lack of affordable housing in Austin, it has been difficult. Either way, she says she’s not moving out without a fight.

Overall, evictions are the highest among Black and Hispanic Texans. These are statistics from the Evictions Lab.

In more than 20 ZIP codes in Fort Worth, eviction filings are up more than 100% above average since June.

Evictions in Round Rock have been 50% above average since May.

Austin has the lowest number of total evictions with 1,193 since March 15, but most of the eviction filings are within the Latinx community.