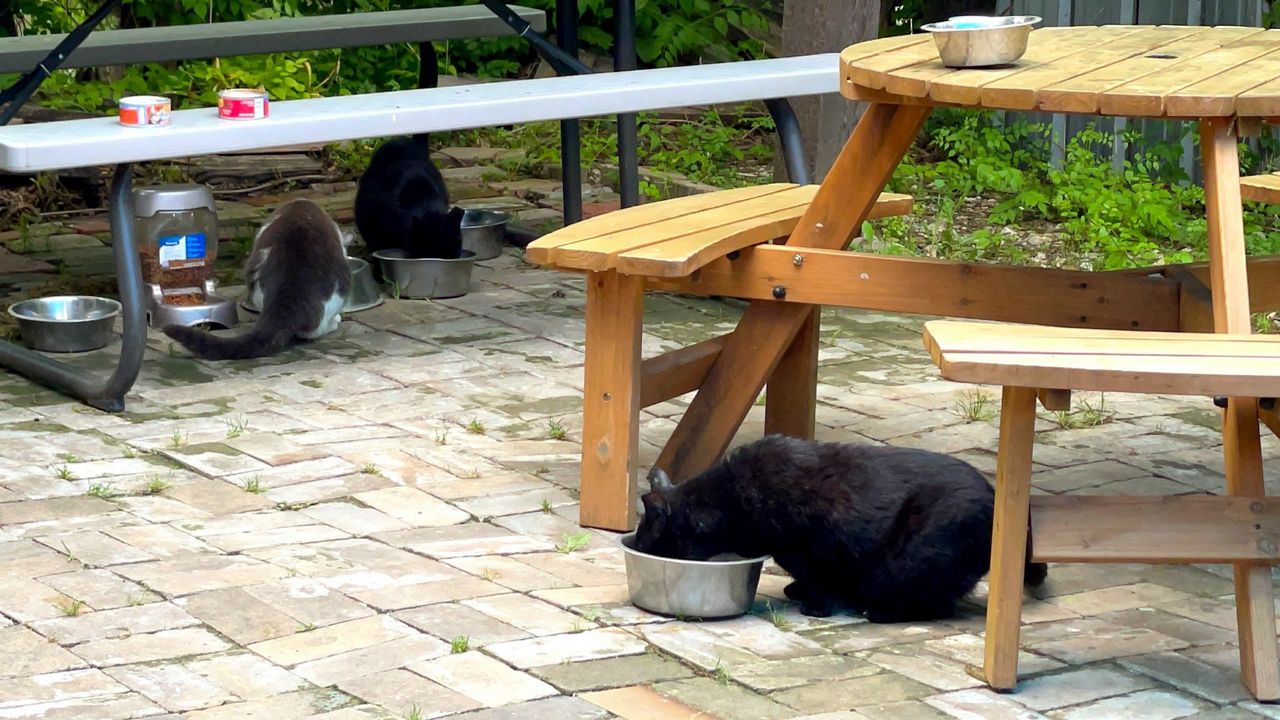 Welcome to the 'catio' of Ten Bells Tavern in Dallas, meet the bar cats who call it home

DALLAS — You’ve heard of "cat cafes" and maybe even "barn cats” that catch rodents and other pests around someone’s home. But have you heard about the “bar cats" who roam the “catio” at a Dallas neighborhood pub?

Ten Bells Tavern in the Bishop Arts area of Dallas is known for its colony of feral cats that have made a home for themselves in the patio area of the bar. Owner Meri Dahlke has been taking care of them since the bar first opened nine years ago. Dahlke said cats have always been a part of the bar’s story. She embraced them, instead of looking at them as a nuisance.

"When we opened this place up and I realized there was a need for people to take care of porch kitty cats, it was either we could get rid of them — or whatever, I don't even want to even think about that — or do something about it,” Dahlke said. "And so I figured since I've always loved animals, that I'd rather have them be a part of this place, than try to not make them a part of it.”

The current “core cats,” as Dahlke calls them, are Beatrix Kiddo (aka the “Queen of Ten Bells”), Lucy, Jerry Cantrell, Motörhead, Irene, and the newcomer HRH Harry. Every morning Dahlke drives up, the cats recognize her car and come scurrying out of the shadows. She brings out the container of dry food and some bowls, but the “big prizes” are the cans of wet cat food the cats can’t get enough of.

“All my staff loves them and they take good care of them and if somebody comes in to Ten Bells and are not nice to the cats, they get chucked out really fast,” Dahlke said. "It was easier for me to incorporate them, make sure they're TNRed, fully vetted and awesome cats versus anything else. I actually had people reach out to me from up the street like ‘Well, we have a cat problem.’ I never thought it was a 'cat problem,' I thought it was an awesome opportunity to take care of the cats. So, maybe that's just me."

Not everyone is as crazy for cats as Dahlke and her staff. She said her bar cats have received threats that were thankfully never carried out. However, she didn’t want to risk their safety and registered her community of feral cats as a “colony” with the City of Dallas.

"The city actually encourages the TNR (trap, neuter, return) of cat populations around because it keeps vermin low, like rats, mice, all that kind of stuff. So they actually are encouraging that. If you hurt a member of the colony, it’s actually, they can go after that person because it's a registered colony. The person never followed through on the threat because it was just empty threat but whatever, it's still good to know that that's in place,” Dahlke said. “If one of my core cats went missing, I’d probably lose my mind.”

There was a point where Dahlke and her partners questioned whether cats would be a turnoff and drive customers from patronizing the bar, however, that largely hasn’t been the case.

“The best thing was my two partners that were with me, they hated — well, I wouldn’t say hated — they didn't want the cats here because they thought they would drive customers away and actually it's brought people here. The cats, they actually have their own hashtag: #CatsofTenBells  and I love that that people come here specifically. People don't know who I am, but they'll know their names like ‘Oh, there’s Lucy!’ And I'm like, ‘They know my cats’ names!’ It's really nice,” Dahlke said.

Over the years, Dahlke said Ten Bells has hosted regular fundraisers for several organizations and nonprofits in order to give back to other animal lovers like her. So far, she’s raised $45,000 and she says it’s all thanks to the stars of Ten Bells, the cats.

"Feral Friends is our biggest one, obviously, because they've helped me out with the cats. So we've done Feral Friends, a donkey rescue group where they actually bring live donkeys up here from San Angelo called Peaceful Valley Donkey Rescue. We've done Dallas Animal Services, Dallas Pets Alive, we’ve done the SPCA, we've done the Dallas Zoo several times,” Dahlke said. "Anything that's local like a 501(c)(3) that has approached us. Before COVID, we were probably doing between four to six fundraisers a year, easily.”

The COVID-19 pandemic may have shut down the bar for a time, but that didn’t mean Dahlke abandoned her colony of cats. She said if it wasn’t her, one of her staff members was at the bar divvying out the bowls of food. Dahlke spent time in Europe during the pandemic, which ended up forcing her to quarantine for a time.

"I actually had volunteers when I was in quarantine, like people that knew me on Facebook that live around Oak Cliff, they're like, ‘We can come up there, we can take care of the cats.’ And I had several people that would come up to the bar just to check on them to make sure they're okay. So I really do appreciate that,” Dahlke said. "It was like a community effort. I had some people that volunteered bags of food, they're like, ‘We know you can't go to the store. So it was really nice.'"

And the burning question of if she’s taken home and adopted any of the cats from Ten Bells? Of course.

"I've actually taken two cats home from here,” Dahlke said. "One was a calico kitty cat I named Jack Kitty, after my dog. And then another one I named JJ after a patron of ours, he's a tuxedo cat,” Dahlke said. "I would take them all home if it was up to me. But unfortunately, the person I live with who's my partner here is like, ‘Yeah, we have two cats, that's fine.’”

And if you were wondering, ironically…the bar is dog-friendly too.

For the bar’s nine-year anniversary, Ten Bells Tavern is hosting a fundraiser for Feral Friends. The event will be held the weekend of June 25 - June 27, and money will be donated to the nonprofit which helps provide assistance in the “Race to Reduce Litters” through the promotion of TNR. If you want more information about low cost or free spay and neuter, vaccinations and microchips, visit the Spay Neuter Network. If you’d like to donate directly to Ten Bells to help with the cost of caring for the patio cats, you can do so via the Venmo name @tenbellstavern.