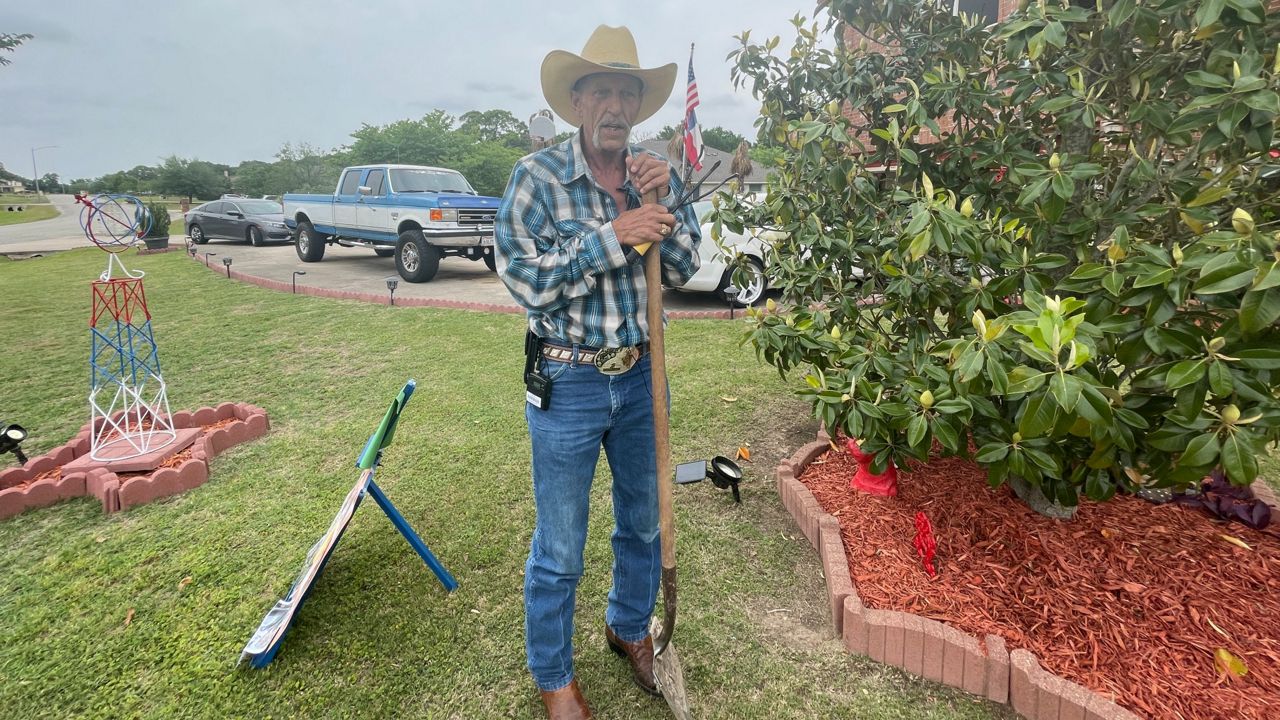 Dave Gramling, of Bastrop, Texas, who was recently bitten by a rattlesnake, appears in this image from May 2021. (Spectrum News 1/Carlos Garcia)

BASTROP COUNTY, Texas — As we get deeper into springtime many Texans are tempted to cozy up in a field of bluebonnets for selfies, while others may decide to roll up their sleeves and get some yard work done. However, those spaces can sometimes be home to dangerous, but natural, neighbors.

Dave Gramling knows a thing or two about that. He was bitten by a rattlesnake while working on a neighbor’s yard.

“I grabbed the weed, and it was up by the stock of the plant, and next thing I know, boom. I got bit,” he said.

The venom from a rattlesnake can be fatal, especially for more vulnerable populations.

“You can lose your limb, you can die for sure, it's extremely serious. Especially a child, the amount of venom that you can get from a snakebite can easily, easily kill you,” said Dr. Jeremy Kenter of Ally Medical in Bastrop.

“It hurt. It’s a very strong pain, going through my fingers in my hand, and then the swelling started, and then the pain got unbearable,” said Gramling.

“A rattlesnake bite has a certain type of toxin that actually affects your blood more, so you have bleeding issues. There are other snakes that cause more paralysis-type things where you can't breathe and you're having difficulties controlling your limbs, but any of the pit vipers, which the rattlesnakes fall into are going to have more blood-type issues,” said Dr. Kenter.

Gramling has had experience working with reptiles in the past, so he says he was able to keep his composure. He pinched the sides of the snake’s head, pulled out the fangs, and threw it off before disposing of it.

RELATED: What to do if you encounter a snake in Texas

“It was a diamondback rattlesnake. It was probably about 4, 4 and a half feet long,” he said.

The damage had been done, though. Gramling’s hand began to swell, followed by his arm, and then the toxins began creeping up to his shoulder until reaching his chest. Amputation was becoming likely.

Fortunately, intervention at Bastrop Ally ER helped reverse some of the damage through a total of nine vials of anti-venom treatment.

“You don't need to put a tourniquet on or do anything fancy. You might want to wash the area if there's dirt on it, but really it's just getting to any sort of medical facility as fast as you can. That's the most important thing,” said Dr. Kenter.

It took over a week for the swelling to completely go away and about a month for him to regain complete mobility. Nature can be frightening and even deadly but Gramling says, even now, he still has a deep respect for the creatures who call our surroundings home.