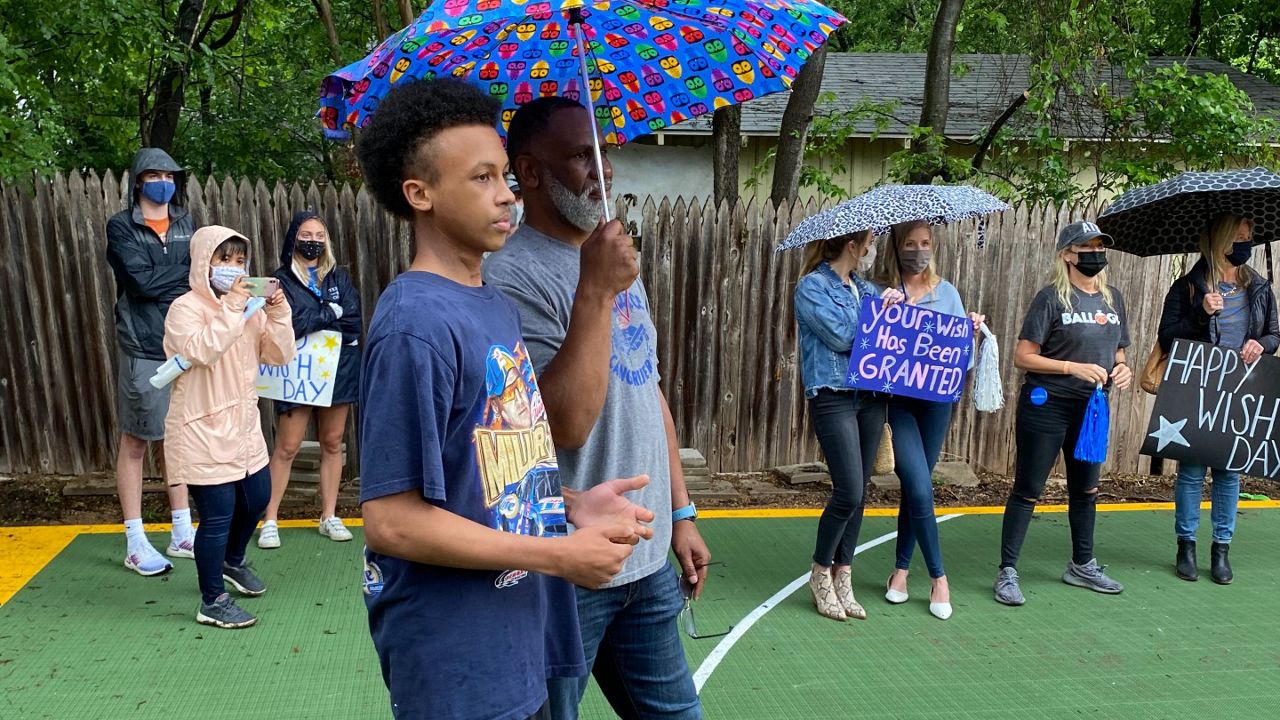 Solomon Marshall, left, and his father, Steve Marshall, appear on Solomon's backyard basketball court in this image from May 2021. (Spectrum News 1/Travis Recek)

AUSTIN, Texas — Steve Marshall knew from an early age that his son Solomon was interested in the game of basketball. He vividly remembers watching the 2006 NBA Finals with Solomon when he was just a baby.

“He is just 6 months old but he’s got a huge smile on his face and is totally focused on the game,” Marshall said. “Even at that age he was zeroed in on basketball.”

While Solomon doesn’t remember those NBA Finals, he does remember watching a few years later and beginning to root for his new favorite team.

“2010 Lakers vs. Celtics, when Kobe won in Game 7,” said Solomon. “I remember watching with my dad on the couch with my stuffed animal and Magic Johnson jersey. That’s when I fell in love with the Lakers.”

He’s been following them ever since and been in love with the game of basketball as well. Not only was Solomon a fan, he was becoming a good player.

“I think I’m a pretty good shooter and I think I can handle the ball pretty well,” Solomon said of his game.

When he got to high school at St. Andrew’s in Austin he tried out and made the varsity team as a freshman.

“I was surprised at first but the team was very welcoming,” he said.

“I was just blown away and just thrilled that he made the varsity team as a freshman,” said Steve Marshall.

A lot of great things were happening for Solomon at that time but things changed quickly one day on his way to basketball practice that fall.

“I felt a lump on my neck, so I told my parents and we went to the doctor pretty regularly the next three weeks,” Solomon said.

After many tests, the doctors found a tumor in Solomon’s neck.

“We discovered in November of that year that he had cancer and it was devastating, it was a shock,” Steve Marshall said. “No parent can imagine their child having a life-threatening illness.”

The initial feeling of shock is something that Solomon felt as well.

“When I first found out I had cancer I was mad, sad and scared,” he recalled.

Despite that, he attacked his treatment with a strong will and the power to push through the pain. Solomon went through seven rounds of chemo and more than 30 radiation treatments.

“I was always expecting Solomon to say, 'Dad, I’ve had enough. Enough is enough,'” Steve Marshall said. “He never did, he never complained. He just went through it.”

Steve Marshall worried for his son because he knew exactly what he was going through. He is a cancer survivor himself. Solomon is now a cancer survivor as well. His most recent tests have shown him to be cancer free.

“Every day after cancer is a blessing, even the little things we do are a win,” Solomon said.

Solomon is healthy enough to be back out playing basketball and working on his game. Recently he got a huge gift through Make-A-Wish Central and South Texas. They partnered with Sport Court of Austin to build a basketball court in Solomon’s backyard.

“Watching Solomon play basketball again is a dream come true,” said Steve Marshall. “There were times during his treatment where I didn’t know if he’d every play again.”

Not only was Solomon gifted the court, but the Austin Spurs gave him a jersey and an invitation to a summer camp. To go with his new court, Ballogy gave him a lifetime skills assessment membership to its program and Our Lady of the Lake University gave Solomon an honorary scholarship.

Solomon is hoping that he can earn a scholarship to play basketball in college but he’s also found new dreams for the future after what he’s been through.

“My end goal and what I’ve decided I want to do is become a doctor,” Solomon said. “I want to help kids the same way my doctors helped me.”