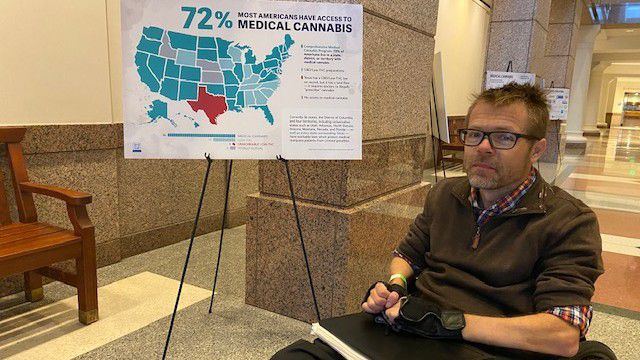 Medical cannabis advocate and Deputy Executive Director of the Coalition for Texans with Disabilities Chase Bearden appears in this image from April 2021. (Spectrum News 1/LeAnn Wallace)

AUSTIN, Texas — Texas lawmakers are on track to expand the state's Compassionate Use Program. That means more Texans could be able to access cannabis to treat various ailments.

The House Public Health Committee unanimously approved House Bill 1535 last week. The bill would significantly increase who’s eligible for medical marijuana – as well as increase the allowed level of THC, the main psychoactive chemical in the plant. It’s a bipartisan move that’s creating hope for advocates who say Texas is behind the curve when it comes to expanding medical cannabis.

It's a priority piece of legislation for the Coalition for Texans with Disabilities. The deputy executive director of the organization knows firsthand the benefits he's experienced using the plant as medicine.

Chase Bearden broke his neck while playing sports when he was just 17 years old.

"I went from being an elite athlete to being paralyzed from the neck down," said Chase Bearden, deputy executive director for the Coalition for Texans with Disabilities. "I had to take painkillers for 10 years and that's what insurance would pay for," he added.

He says he discovered cannabis while taking a family member to Colorado. He says using the plant in a liquid drop form helped him work his way off from having to take opioids.

Mike Thompson, an Austin resident and childhood cancer survivor, is also pushing for the state to give more people the option to try it out. Thompson has been in survivorship from cancer for 21 years but says he experiences chronic pain.

"The pain is just as raw and searing as it was the day when I had my reconstruction," said Thompson.

Thompson says he's never tried cannabis and doesn't know whether it would curb his pain. But he says opioids often leave him feeling worse and so his focus now is on paving the way for other cancer patients and survivors in Texas to at least have the option to try it.

“Every waking moment I do think about how fortunate I am, how blessed I am to still be here, but I also want to use that second, third and fourth chance at life to effect positive change in the world, and right now that is destigmatizing a plant that could help a lot of people," said Thompson.

HB 1535 would not only give more cancer patients access, it would also allow veterans with PTSD to try it.

"The majority of my patients, probably 90 percent of them are veterans who suffer from chronic pain, anxiety, PTSD," said Dr. Kirsten Shepard, Pain Stoppers Inc. founder and CEO.

Like so many people advocating for more access to medical cannabis use, Dr. Shepard's story is also personal. She started researching medical marijuana after her father was diagnosed with mesothelioma in 2014.

"As I started researching any and every option to help him, that's how I discovered the CBD," said Dr. Shepard.

And as a health care practitioner Dr. Shepard hopes to soon have more treatment options for her patients.

"In my career of over 20 years, you know, as a massage therapist and chiropractor working in an integrative practice, we see the same things all the time. Individuals that have problems with their nerves, their joints, their muscles, and with their bones, we should not be automatically giving them pharmaceuticals when there's a better way," Dr. Shepard said.

Almost 5,000  Texans are currently in the compassionate use registry. That’s according to data collected by the Department of Public Safety and submitted by physicians.