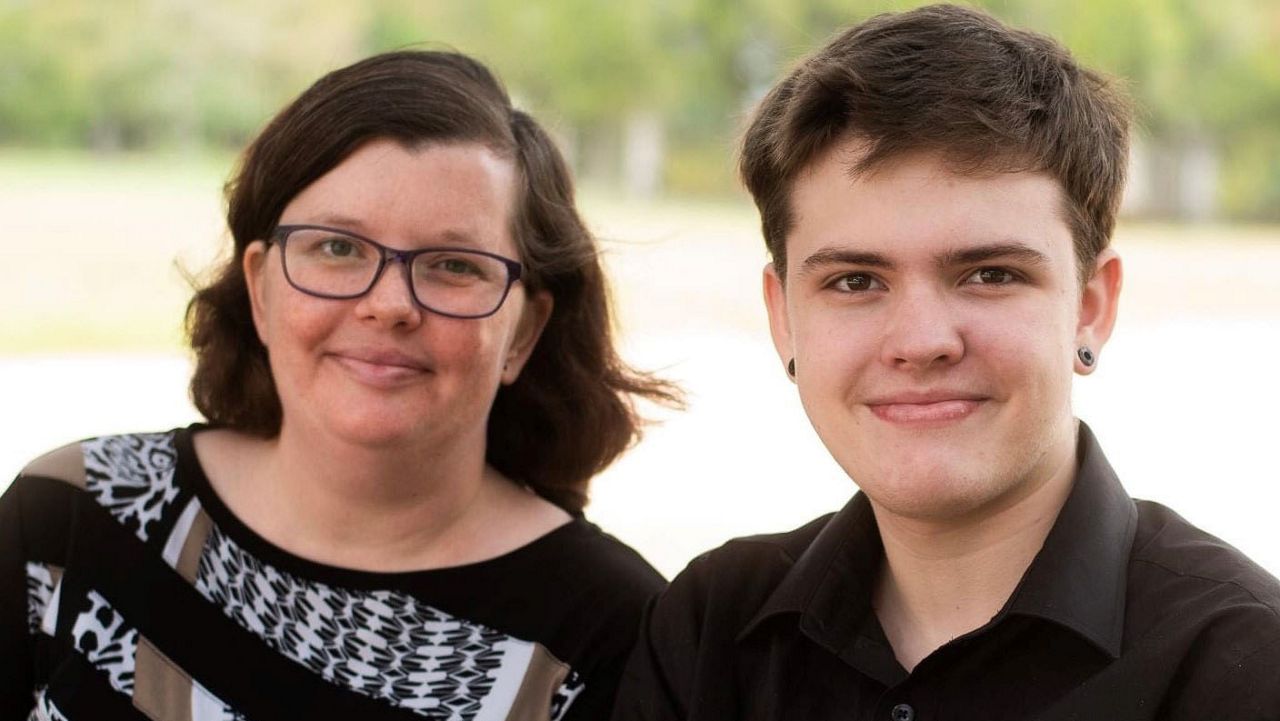 AUSTIN, Texas — Lauren Rodriguez said her 17-year-old son Greyson is a happy high school student getting ready for college who is thriving. But she said it took a lot to get to this moment.

“I had never seen a grin that big on my son's face. He couldn't believe he was finally going to get the puberty blockers to help him. And then when he got testosterone, that was super exciting," Rodriguez said. "Then, in his own words, after top surgery, the first thing he said to me after his surgery was, 'Mom, I'm finally free,' and it just broke my heart that he had to suffer for so long.”

But some Republican lawmakers have filed several bills that would make it harder for children to get gender-affirming health care and restrict use of puberty blockers.

Wednesday at the Texas Capitol Rodriguez joined other family members and allies of transgender and intersex Texans to denounce those bills in a news conference organized by Equality Texas.

“That sends a message to trans youth, not only in Texas, but all over the country that they’re not loved and that they do not belong,” said Landon Richie, an activist out of Houston.

Lisa Stanton, also from Houston, spoke alongside her transgender daughter. Stanton said these types of medical decisions are a family matter.

"Before my daughter transitioned socially, she was sad, depressed, anxious. When she was able to live authentically as her true self, in her gender identity, all of that went away," Stanton said. “Please, legislators, stay out of our business, stay out of our private lives."

Among several proposed laws, the group spoke out against House Bill 1399, which would prohibit liability insurance policies from covering the transition-related health care of children. The bill’s author, Rep. Matt Krause, R-Haslet, said he has heard from Texans who regret having made these medical decisions when they were younger.

“There's other ways, I think, for Texas, Texans to support, respect and affirm folks without doing these potentially life-altering or irreparable surgeries," Krause said.

Krause's bill was scheduled for a public hearing at the House Committee on Public Health Wednesday. He said he believes such life-changing procedures require more vetting. Krause also noted that there are a number of policies in Texas preventing those under the age of 18 from taking certain actions.

“We just feel like it's good public policy that kids shouldn't even have the option to do that before they become an adult. If they want to make that decision then, that's great. It's not about trusting the parents one way or the other. It's about good public policy for Texas,” he said.

Separately, the Texas Senate advanced a bill that would limit transgender sports participation, despite the NCAA warning lawmakers against it this week.

​Texas is among 30 states weighing bills to ban transgender girls or women from participating in sports consistent with their gender identity.

NCAA officials put a statement that said in part, "Our clear expectation as the Association’s top governing body is that all student-athletes will be treated with dignity and respect. We are committed to ensuring that NCAA championships are open for all who earn the right to compete in them."

The statement went on to say any action to the contrary could result in the loss of championship games and events.

Senate Bill 29 would block transgender athletes from participating in grade school and high school sports outside of their "biological sex." It initially passed Wednesday along party lines.

Sen. John Whitmire, D-Houston, asked the bill's author, Sen. Charles Perry, R-Lubbock, "Are you not concerned that you're demonizing people unnecessarily that are already discriminated against?" To which Perry replied, "So the one concern I have is a 195-pound individual, male, running over a 120-pound female athlete, and she's permanently damaged."

Rodriguez's son Greyson is heading off to an LGTBQ-friendly campus in the fall to study nursing. Rodriguez said he was partly inspired by the medical team that has supported him all these years and become like family.

“If we hadn't had gender-affirming care these past few years, I would probably be telling you about how I lost my son,” she said.