Power Players features state lawmakers rising through the ranks or making a notable mark on the 87th Texas legislative session. Each week, Capital Tonight will feature an elected official to give you a chance to get to know the person behind the powerful position.

AUSTIN, Texas — Tucked away inside the history of the Texas Capitol is a man and his love for state historical maps.

"I enjoy collecting antique Texas maps," said Rep. Briscoe Cain, R-Deer Park. "I enjoy Texas history and honoring those who came before us."

Rep. Cain displays his collection around his Capitol office. But he admits he has a problem and there's plenty more where that came from. The Houston-area Republican grew up in Deer Park, around the Houston Ship Channel, where both of his parents worked at chemical plants.

"Where I'm from, we say that smell is the smell of money, and not just for the people who work there, but who live there," he said.

He credits his parents for his success and his current home.

"I live in the home I grew up in. Purchased from my parents after they built their retirement home," he said.

Cain came to the Capitol in 2017 after defeating a 14-year incumbent. His colleagues may talk about his baby face, but the conservative quickly became a full grown bulldog as part of the Texas Freedom Caucus spearheading a range of far-right conservative issues and taking down bills he didn't like.

"It's not personal. It's about policy and that's what we came here to do," he said.

Cain caught many people's attention last year when he volunteered to help President Donald Trump's legal team try to overturn the 2020 election outcome. A now-deleted tweet shows him heading to Philly to quote "fight for a fair and honest election." While there's been no evidence of widespread fraud, Cain says he'll now continue that fight as chair of the elections committee. He was appointed to the position by the House Speaker.

"The legislative session will be a failure if we don't reform our electoral process," he said.

His tweets have gotten him in trouble. He's even been blocked for a period of time for tweeting at Beto O'Rourke "My AR is ready for you Robert Francis."  But Cain says he's got a softer side.

"There's a difference between our twitter personalities and reality."

The movie he's watched over and over is the critically-panned 90s comedy Bio-dome. But that's been replaced by Mickey Mouse Clubhouse in recent years. That's because he's the father of five boys -- ages eight to eight months.

He also brings his family to Austin each legislative session.

"We're homeschoolers so that allows us to have them come with us," he said. "I've seen this building, the legislature affect people's families. My wife and I decided we wouldn't allow this building to get in the way of our family or marriage." 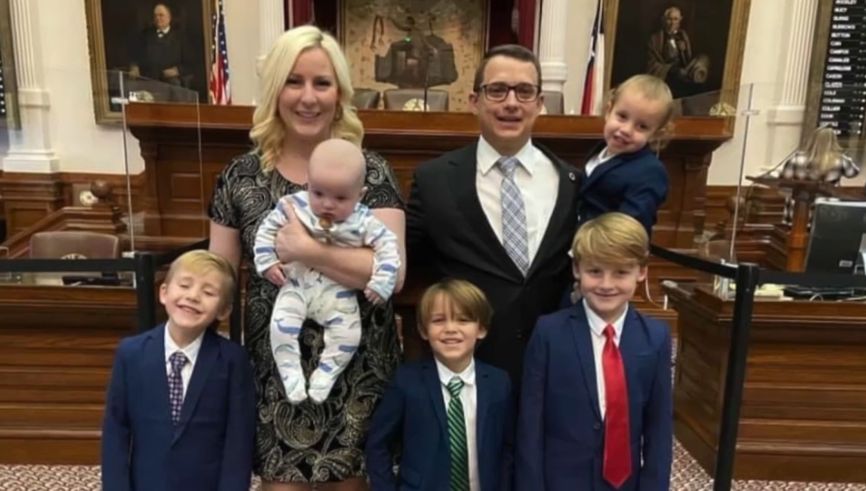 Cain also opened up about his own struggles last session.

"I, along with countless others who experience these challenges brought on by Asperger's and autism, communicate and express myself in a way that's different from others," he said during a speech on the House floor in 2019.

Now, he jokes it's what sets him apart.

"The weirdest thing in the Capitol might be me."

A young lawmaker using his love of Texas maps to navigate the politics and policies of the state legislature.