A video screen grab appears to show Frisco, Texas, resident Jenna Ryan inside the U.S. Capitol during the January 6 riot. (Source: United States District Court for the District of Columbia)

According to the criminal complaint, Ryan took a small private plane to the nation’s capital. The document states that she posted multiple videos to her Facebook account from the plane on January 5.

A January 6 video, the complaint states, depicts Ryan standing in front of a bathroom mirror and stating, “We’re gonna go down and storm the Capitol. They’re down there right now, and that’s why we came, and that so that’s what we’re going to do. So wish me luck.”

Subsequent to that, the complaint states, Ryan posted a 21-minute Facebook Live video that depicts her walking with a group toward the U.S. Capitol building. She additionally posted several pictures of herself to Twitter and Facebook, including one in which she is posed in front of a broken window with the caption, “Window at The capital [sic]. And if the news doesn’t stop lying about us we’re going to come after their studios next …” 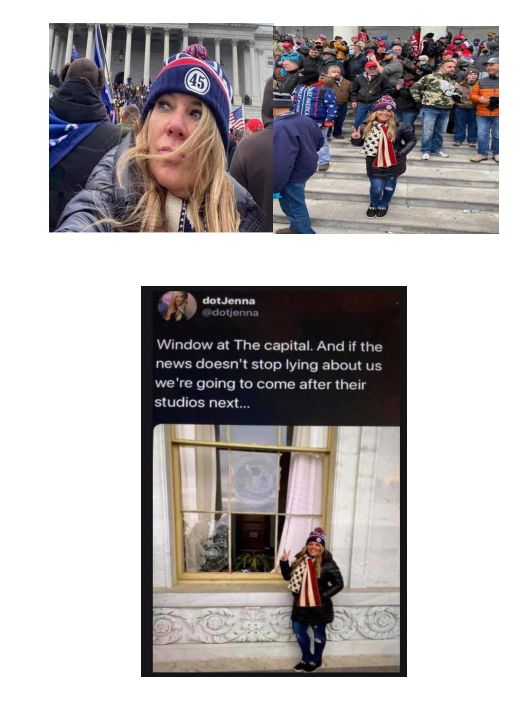 Photos Jenna Ryan posted to social media from the U.S. Capitol on January 6, 2021. (Source: United States District Court for the District of Columbia)

Another Facebook Live video, the complaint states, which has since been deleted from the platform, shows Ryan entering the Capitol via the Rotunda. At the beginning of the video, she can be heard saying, “We are going to [expletive] go in here. Life or death, it doesn’t matter. Here we go.”

The complaint further states Ryan can be seen inside the building on video, holding up a cellphone.

Following the breach, according to the complaint, Ryan posted on Twitter, “We just stormed the Capital [sic]. It was one of the best days of my life.”

Ryan is charged with knowingly entering or remaining in a restricted building without lawful authorities and disorderly conduct on Capitol grounds.

Ryan Document by Craig on Scribd

Following the riot, which claimed five lives, Ryan sat down for an interview with Spectrum News 1 reporter Ashley Claster.

During the interview, Ryan said her only mission was to support President Donald Trump and that since January 6, she has become the target of violence and death threats.

Like many of his supporters, Ryan believes the president was the victim of election fraud and that the office was stolen from him.

“We feel that the election was rigged. And it’s not okay. So it’s not necessarily about, you know, taking over the Capitol. It’s about We the People own this building. This is our building,” Ryan said.

During the interview, Ryan claimed she didn’t go too far into the building.

“At the door frame, but no farther than that,” she said.

The story prepared from the interview is available for viewing above.