DALLAS — A Dallas nonprofit, CitySquare, is tackling the issue of affordable housing limitations in the city by creating an apartment complex of shipping container homes in Southeast Dallas.

The “Lomax Container Housing Project” will consist of 19 one-bedroom units. It will be located across the street from The Cottages at Hickory Crossing at South Malcom X Boulevard and Louise Avenue, a current CitySquare Housing project of 50 tiny homes for homeless individuals.

The units will be rent restricted at 60 percent of the Area Median Income (AMI) and go for about $906 a month including utilities. The current income limits for a 60 percent AMI unit are $36,240 for one person, and $41,400 for a family of two. 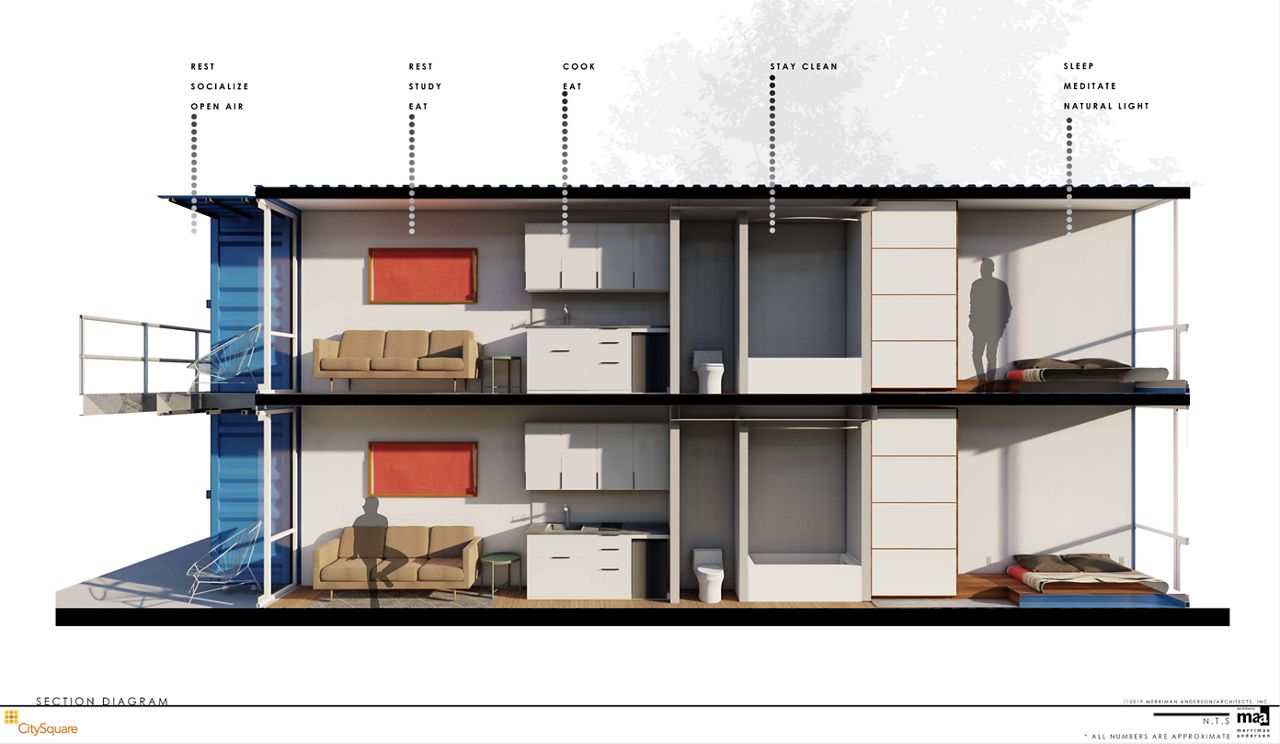 "They will be more of a shotgun style home. You'll walk into the living room, kitchen, dining room area, pass through the bathroom, and then the bedroom will be at the back of the unit,” said CitySquare Housing executive director Chad Baker.

This multifamily housing complex of 300-square-foot containers will open in the spring of 2021. It is just phase two of a three-phase plan to construct a second complex of shipping containers in 2022.

"This project is kind of a phase two, in a three phase plan of ours to build more of that type of housing. So, phase one was kind of the design and refinement and building the prototypes. Phase two is rolling it out to now a small multifamily site, and then phase three will be rolling it out to a larger multifamily site of 100 to 130 units to where then we can have a mix of incomes that we accept and units will be set aside for lower to no income individuals, as well as all the way up to individuals paying market rate,” Baker said. "We're currently in talks with a property owner to get that site under contract. I'm hoping that we can do that in 2021 and have that site, kind of, ready to go in 2022.”

Check this out! We're always looking for more housing solutions here at CitySquare. That's why we recently installed...

“We were going to have to find kind of new and innovative ways to construct those units without federal subsidies or local subsidies. Because the subsidies are just harder and harder to get and the amounts that are available are dwindling year by year.” Baker said. "So our funding will primarily be from fees we've received in the past through developing other low income housing sites. With every site we've developed in the past, we have received a developer's fee for doing so. And we've been lucky enough over time to kind of develop enough housing stock to where we're starting to get to a point to where we're becoming almost self-sustainable when it comes to funding our future projects, as long as we can keep those future projects at a certain affordability level. And along with the developers fees that we've received from previous projects, we will be kind of using some traditional bank financing for the gap on this project. So there will be a mortgage on the project, as well as just capital that we are investing in our own project.”

Current Hickory Crossing resident Billy Sims says he knows firsthand the good CitySquare Housing properties can do for people. Once on the streets, Sims has turned his life around in the last year and a half, crediting it to his tiny home and the resources available to him through the nonprofit. The Hickory Crossing project, which opened in 2016, combats chronic homelessness by housing homeless individuals with histories of mental illness, joblessness, poverty, and substance abuse. Dallas currently has the largest homeless population in the state.

“I had never had my own place. I've been on the streets, I've been living in trap houses and stuff. But this is like a blessing to me. It's like a new life. I'm not gonna like, it helped me a whole lot. I ain’t gonna lie, if I wasn’t able to get here, I’d probably be locked up,” Sims said. "I’d probably be locked up or dead or something, because it was getting tough out there."

Sims said the 400 square foot bungalow is all he needs. It’s been a place where he can collect his thoughts and work on his music. He is able to speak to the mental health counselors at the facility, and is thankful for the site's security who makes his home a safe place.

"I'm not trying to lose nothing good like this, it’s got a lot of resources and stuff. You can talk to people. If I lose this, I’m out there talking to the dope man to get some advice. It’s like I can’t do that. It’s a mind thing. It’s all a mind thing,” Sims said. "So this helped me a whole lot and I’m gonna continue staying on track."

Sims said he hopes the new shipping container project is a blessing to people like his tiny home has been for him.

To learn more about the housing programs at CitySquare, click here, and if you are in an immediate housing crisis, call the Homeless Crisis Helpline: 888-411-6802.