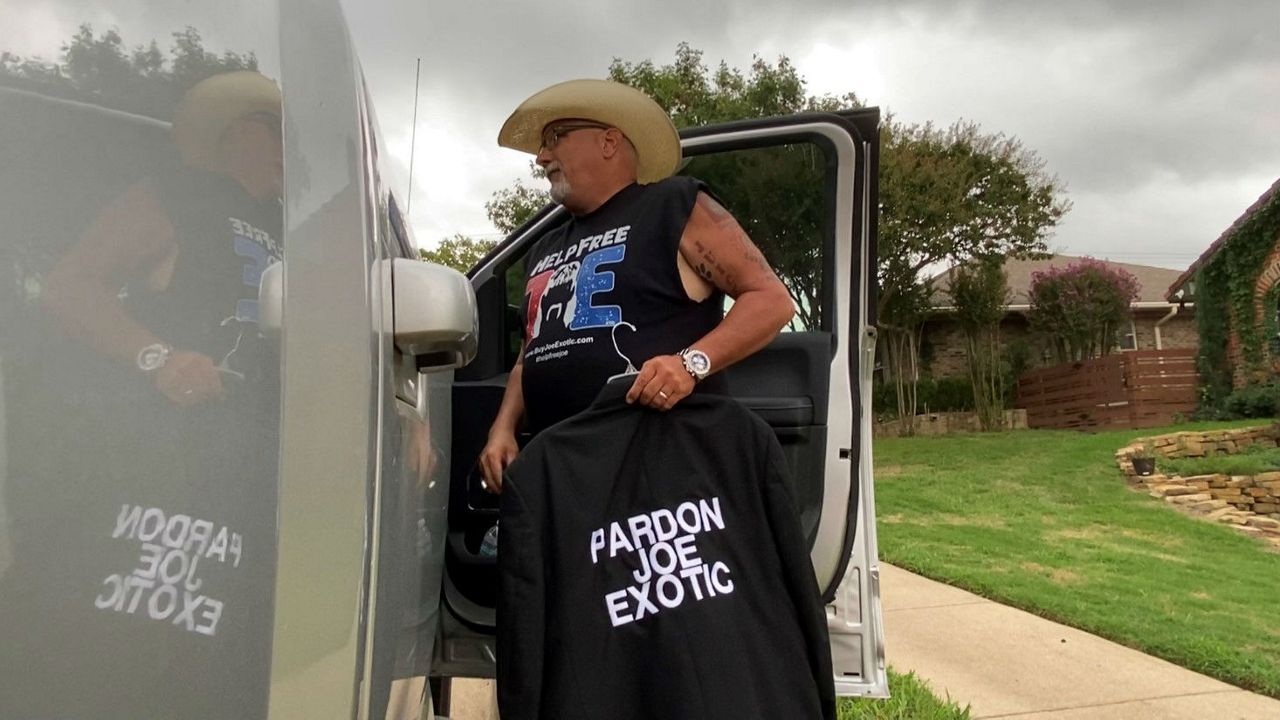 Love’s journey began in front of the Fransisco Hernandez Law Office in Fort Worth where a team of lawyers, dubbed Team Tiger, put together a 257-page document to be delivered to the White House. Love would not go into detail about what the documents contained, or how it would prove the innocence of Maldonado-Passage, but did say, “Everything that is true is written in red, just like the Bible."

Love believes Team Tiger will win a pardon for Maldonado-Passage and that he will become an advocate for criminal justice reform. While driving from the law office to his home, Love protected the briefcase containing the documents with his life.

This is the document that Eric Love of Fort Worth plans deliver to @POTUS in D.C. tomorrow. Love, along with Team Tiger, is asking @realDonaldTrump to pardon Joe Exotic. Love took the briefcase on a plane out of DFW today. #TigerKing #carolebaskin #JoeExotic pic.twitter.com/bUmU2nVmMY

“This will prove that Joe is innocent,” Love said. “When you think about precious cargo, it’s beyond precious. Because this is someone’s life. This is somebody’s entire life. This is their freedom. This is it.”

Maldonado-Passage was sentenced to 22 years after being found guilty in a murder-for-hire plot to kill animal rights activist Carole Baskin, another person featured in the recent Netflix series documentary, Tiger King. A small crew from Netflix is documenting Love’s journey as well.

Love’s wife made him watch the Tiger King documentary, which documents Maldonado-Passage’s business keeping and showing exotic animals at his former wildlife park. He says after watching the series he turned to his wife and said, “I’m going to get this guy out of prison!”

The back of Eric Love’s car says, “Please Pardon Joe Exotic.” It has a picture of @realDonaldTrump and #JoeExotic. Love drove this today to pick up the briefcase with the document inside that he will deliver to @POTUS tomorrow. #TigerKing #carolebaskin #DonaldTrump #Trump pic.twitter.com/nkh84UdLOz

Love sent Maldonado-Passage a letter saying, “I am a retired cop, a philanthropist in Fort Worth, and I am a private investigator. I can assemble a team of attorneys, and I think I have a great shot of getting you out of prison on a presidential pardon.”

He got a letter back from Maldonado-Passage saying, “Eric I desperately need your help. You’ll be hearing from my power of attorney.”

Love says that although he has money and connections, what's really important to him is empathy, an understanding of what it's like to be in someone else's shoes. He believes that with talent, credentialsm and, yes, money, you can correct a lot of the wrongs in life.

His son, Chase Love, said his father does this type of thing often.

“Always, all the time,” Chase Love said. “Him and his wife Lisa run a nonprofit organization called Love Love, and they feed the homeless every weekend.”

Eric Love took off on the plane to Washington D.C. with the pardon in hand. Upon his arrival he said the pardon was covered and delivered, but could not disclose who the surrogate was between him and the president.

The prison in Fort Worth where “Joe Exotic” is being held says, due to the pandemic, an interview with Maldonado-Passage could not be granted.