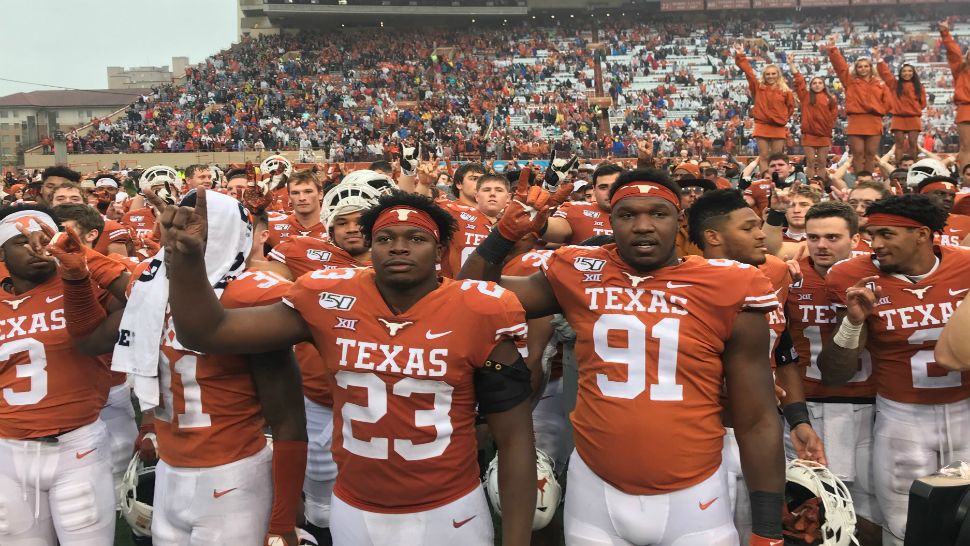 AUSTIN, Texas — While many schools aren’t playing college football this fall, and others are having games postponed, Texas is still on schedule to open the season this Saturday when they host UTEP.

“I still have my fingers crossed that we can get to Saturday. I know how quickly things can pop up,” said University of Texas quarterback Sam Ehlinger.

This is the reality of the high wire act that is playing college football this fall—a season full of uncertainty.

“Things I’m worried about are making it through the dang season,” said UT head coach Tom Herman. “We’ve got to be able to sustain this level of diligence the entire season, which for a group of a hundred 18- to 22-year-olds is going to be difficult but certainly not impossible.”

Texas has tried to create the safest environment possible to help their players avoid catching the coronavirus and allow this season to happen. A lot of the responsibility, though, falls on the players themselves when they leave the facility.

“The things that these young men are having to do just to play and just to compete in the sport that they love is monumental,” said Herman. “A task nobody in organized sports has been asked to do before.”


Knowing all the layers to this, there is still football to be played, and that’s what UT is trying to turn their attention to now.

“There were times during the summer and even during fall camp that we didn’t think we were even going to see game week but we’re finally here,” said UT defensive end Joseph Ossai.

If they can play a full schedule, this is a Texas team that comes into the season ranked and has the potential to be good. They went just 7-5 during the regular season last year but bounced back with a dominant bowl win over Utah. In the off-season, they replaced numerous assistant coaches and they feel like the pieces are in place to win games.

“I really feel like our team this year, this is the year, so to win a Big 12 Championship this is what I came here to do,” said UT safety Caden Sterns.

The season opener is this Saturday at 7 p.m. against UTEP.