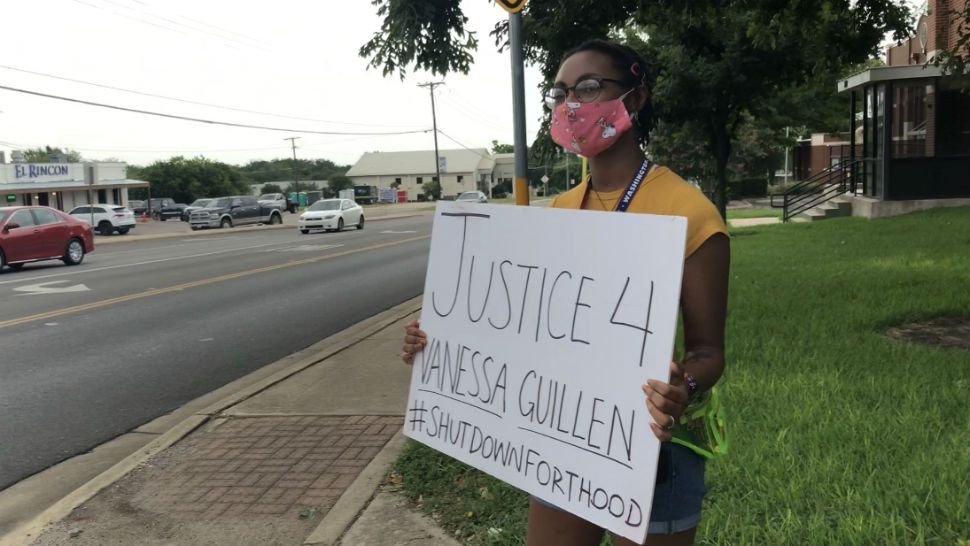 AUSTIN, Texas — Tia Grayson is taking matters of social injustice into her own hands in the best way she knows how—demonstrating.

Carrying a sign that reads "Justice 4 Vanessa Guillen #ShutdownFortHood" Grayson joined thousands of people across the nation who are protesting the Army's handling of the disappearance of soldier Vanessa Guillen. The only difference between Grayson's protest and others is that she is going at it completely alone.

The 18-year-old was outraged when she heard news of Guillen's death.

“I feel like the energy needs to be focused on making sure that the base (Fort Hood) is completely okay and not just the people who murdered her because—there are people in there who have done wrong things that have been so brushed under the rug and they are only coming up now because of dead bodies on their hand,” Grayson said.

Grayson's protest was met with supportive honks of cars going by but at times the situation turned sour.

“Like whenever people roll down their windows and just be like you’re an N-word— hard 'R'— it’s just like 'Why you don’t know me?’ You literally don’t know a single thing about me except that I can hold a sign outside for more than one hour,” said Grayson.

It's a big move out of her comfort zone for the teen who suffers from chronic anxiety but she says it's worth the stress.

“Even though this is slightly terrifying I don’t know what can happen I’m still alive and that’s the whole entire thing is proving to my brain, like, guess what you’re not dead yet. You can do more,” said Grayson.

Her message is now spanning beyond Central Texas after this tweet went viral on social media.

“I don’t have a lot of money coming in. So like I can’t donate to everything as much as I would want to. So this is my version of donating. I’m donating my time and my energy,” said Grayson.

For Grayson, it's all about building a better tomorrow.