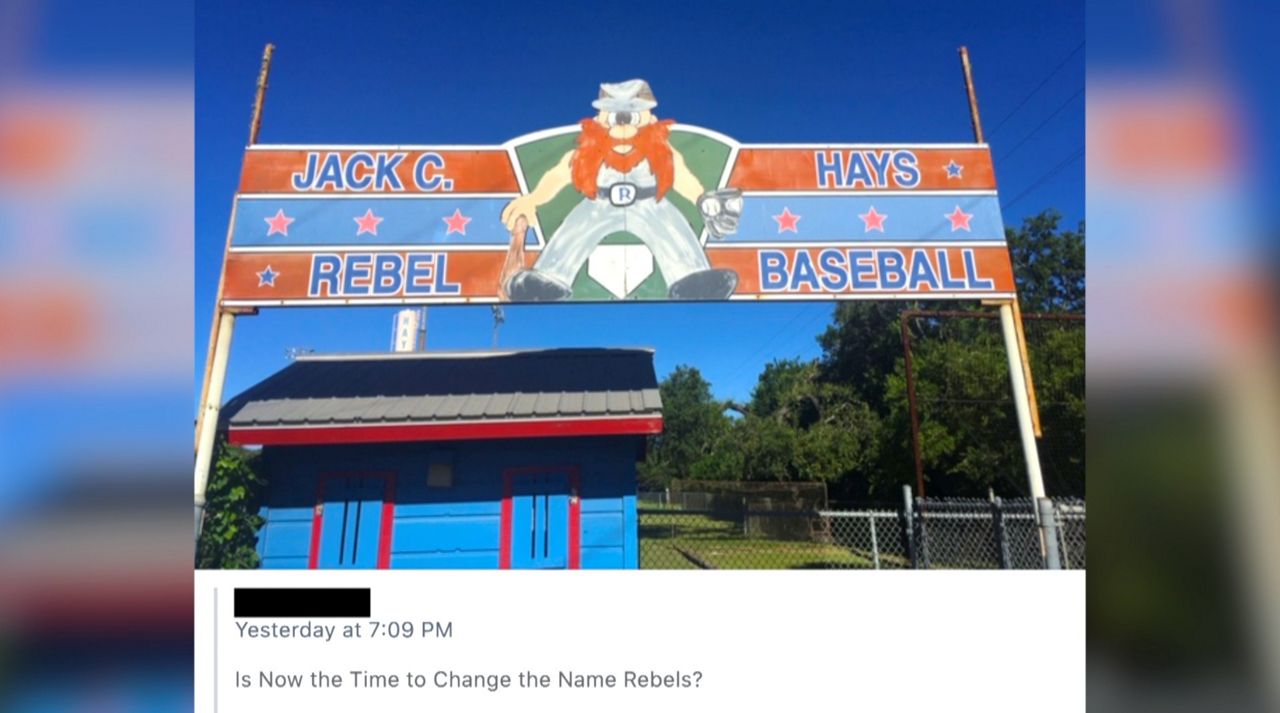 HAYS COUNTY, Texas -- Protests over racial injustice have sparked new conversations in Hays County about whether the long-standing Jack C. Hays High School mascot, the “Rebel," should be replaced.


The debate is split — there are parents who want to see the mascot changed and parents who say “leave it alone.” However, the district has continually said that it’s not up to the parents to decide.

"The starting point for conversations about change would need to be in a framework that allows the district to keep its commitment made in 2015 - that any consideration of making a mascot change would need to originate as an organized student-led initiative,” said a Hays CISD spokesperson.

For parent Lisa Salazar, it’s past time to replace the Hays High mascot.

“[My daughter is] going to have to start attending that school. I've seen all the conversations going around, especially in this climate and today and everything that's going on. It’s time to make that change,” Salazar said.

Her family moved into a house down the road from the high school back in November. Salazar has been debating on whether to instead make the commute to send her daughter Juliet to Austin High School.

"I really did not want to go to that school because of that one sole reason,” Salazar said. “When I first drove down that road that Hays High School is on and I first saw the sign and I was like 'are you kidding me? No, this can't be.'”

Salazar understands there is huge support for keeping traditions, but thinks it’s time for a change. Hays High School is the oldest high school in the district, established in 1968 and named after John Coffee Hays who was a Texas Ranger.

"There's the diehards who have probably grown up in this area and that's who they are, they're the Hays Rebels. And they don't see it changing. And even though the definition of rebel is just somebody who defies authority, the fact that it went hand-in-hand with the Confederate flag, and the song Dixie — we know exactly what rebels you're speaking of,” Salazar said. "People in Kyle are very attached to that name and it's a tradition. And, you know, I've heard people say 'that it's not what we mean. People don't take it that way,' but I mean, from my point of view, I took it that way immediately. I've asked several people since we started having this conversation, 'when I say the word rebel to you, what do you immediately think?’ And that's, you know, usually the answer: the Confederate Rebels."

The district said while a change to the school name nor the mascot is being considered at this time, a spokesperson said the district “knows the conversation continues and [its] listening.”

“I mean, I realize that it's not going to eradicate racism by changing the mascot's name or anything like that, but I don't feel a sense of welcome just by that name. I don't feel some sense of welcome or inclusion. And that's me — I can't imagine how people of color feel having to go to that school and yell ‘Rebel Pride' at a football game,” Salazar said.

A change would have to originate from a student-led initiative. Salazar said she has high hopes that this generation of students knows better and can make that change. Of note, the other, much newer high schools in the district have animal mascots, the Lehman Lobos, Live Oak Owls and Johnson Jaguars.

"I even remember when I was growing up in high school and I think a junior high school team that was the rebels and it never crossed my mind at that time, but their colors were completely different and their mascot was not somebody in a Confederate uniform. And so it's all of these things that are tied together. It's not just the mascot. It's the history of the school and how it got to be the mascot and how because of the fact that it was tied into all these other factors,” Salazar said.

Hays CISD said if there’s no change led by students, the goal will be to work on re-branding what it means to be a 21st century rebel: those who bring about social change and challenge the status quo.

"I saw a lot of descriptions of 'what a rebel really means outside of the Confederacy.' You don't have time to explain that a football game. When they announce 'the Hays Rebels are taking the field — but not those rebels,' you know, you don't have time to explain that,” Salazar said. "I had a comment from someone ‘oh if you don't like it, you don't have to go to that school.’ Well that's exactly the kind of attitude that I don't want my daughter to be experiencing. ‘If you don't like it, adapt to us or leave.’ It's not right.”

Here’s the full statement from Hays CISD, along with an excerpt from a 2015 statement released when “Dixie” was retired:

Though we are not considering changing the mascot at this time, we know the conversation continues and we are listening. We've made great strides in the past 20 years by banning the confederate flag and eliminating "Dixie" as the fight song. The starting point for conversations about change would need to be in a framework that allows the district to keep its commitment made in 2015 - that any consideration of making a mascot change would need to originate as an organized student-let initiative. If there is no change, we also know we have work to do in re-branding what it means to be a rebel - a 21st century rebel - individuals who have the courage to fight for their beliefs and the independence and integrity to bring about social change, and people who have challenged the status quo and changed the world.

The district believes removing the confederate flag and “Dixie” divorces all symbols of the confederacy from the campus and returns the school to its original starting-point – a rebel culture free from historically negative associations. Rebels are people who have the courage to fight for their beliefs and the independence and integrity to bring about social change. History is full of rebels including the patriots who rose up against a tyrannical British Crown to form our country, the Texans who fought to form a republic, and a host of other movements and individuals who have challenged the status quo and changed the world. The rebel mascot was created by the first Hays High School students and it has passed from generation to generation. It belongs to the current and future students. Any consideration of making a mascot change would need to originate as an organized student-led initiative.

On June 3, Superintendent Dr. Eric Wright addressed the district about the death of George Floyd saying “words are important, but it is action that matters most.” He announced he will create a district Diversity Advisory Council that will advise the district from the perspective of equity, social justice, fairness, understanding, and respect. Read his full statement here: https://www.hayscisd.net/stronger

On a related note but apart from the district debate is the street in the city of Kyle called Rebel Drive. According to a post from Kyle Mayor Travis Mitchell, the “southern, country-raised white boy” is pushing to rename the heavily used street. Mitchell said in July he will ask council to place the renaming on the November ballot.