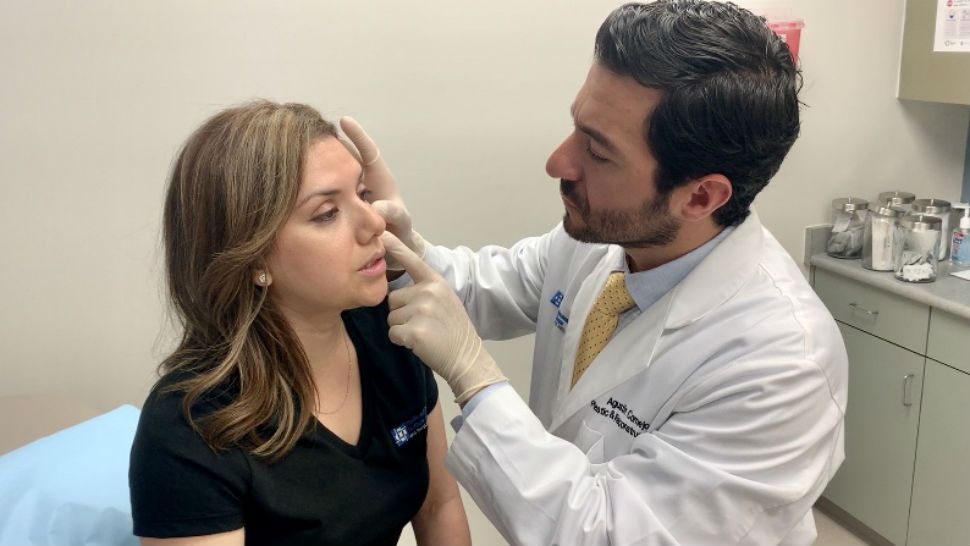 SAN ANTONIO — Doctors from the Baptist Health System in San Antonio are noticing a decrease in appointments for skin cancer screenings amid the coronavirus pandemic.

In March, screenings across the U.S. dropped between 86 percent and 94 percent compared to average volumes in the three years before the first COVID-19 case was confirmed in the country. As health restrictions begin to drop and hospital rooms return to normal, Dr. Agustín Cornejo Esquerra hopes patients won't put off their health any longer.

"I know some people are still worries about going to the doctor and getting exposed to clinics and hospitals. Fortunately, all of our clinics have taken the necessary precautions to avoid any unnecessary exposures to COVID-19," said Dr. Cornejo Esquerra, a plastic surgeon.

His patient, Cecilia Ngyuen, still makes her appointments to him at the Plastic and Reconstructive Institute of Texas. Ngyuen is receiving scar treatment following a bout with basal cell carcinoma, a common type of skin cancer.

"Fun in the sun [while in Mexico], that is where it made it all worse," said Cecilia Ngyuen.

Last year, Ngyuen noticed a small brown mark began to appear on her upper cheek. However, its size, color and texture changed after a June trip in Cabo San Lucas.

"It would kinda crust up and scab a little. It would also bleed," Ngyuen said.

She continued to monitor it until she made an appointment in December. That's when Dr. Cornejo Esquerra excised the growth and sent it off for a biopsy. It was about a week later when Ngyuen found out the blemish was cancerous and had margins attached to it.

"Basically what the margins are, is almost like a root of what he took out so the [cancer] was still in there," she said.

Dr. Cornejo Esquerra suggested she get Mohs surgery, which extracts thin layers of cancer-containing skin. As each layer is pulled out, Ngyuen says the doctor examines it until only cancer-free tissue remains. The healing process involves bruising and stitches, but with treatment, the skin eventually heals. Part of her post care is to continue getting body scans every six months to make sure the cancer doesn't return. Ngyuen also switches between wearing ointment or a medicated bandage to heal the skin. "I thank God that is all I have on my face that I have to wear so I'm okay with that," she said.

Following this journey, Ngyuen encourages people to wear and reapply sunscreen when going outside. Also, if they notice a concerning mole or growth on their skin to get it screened.

"If you notice something different get it checked out. That is the best thing you can do," said Ngyuen.

Other common skin cancers to watch out for are squamous cell carcinoma and melanoma, the most serious of the three cancers.