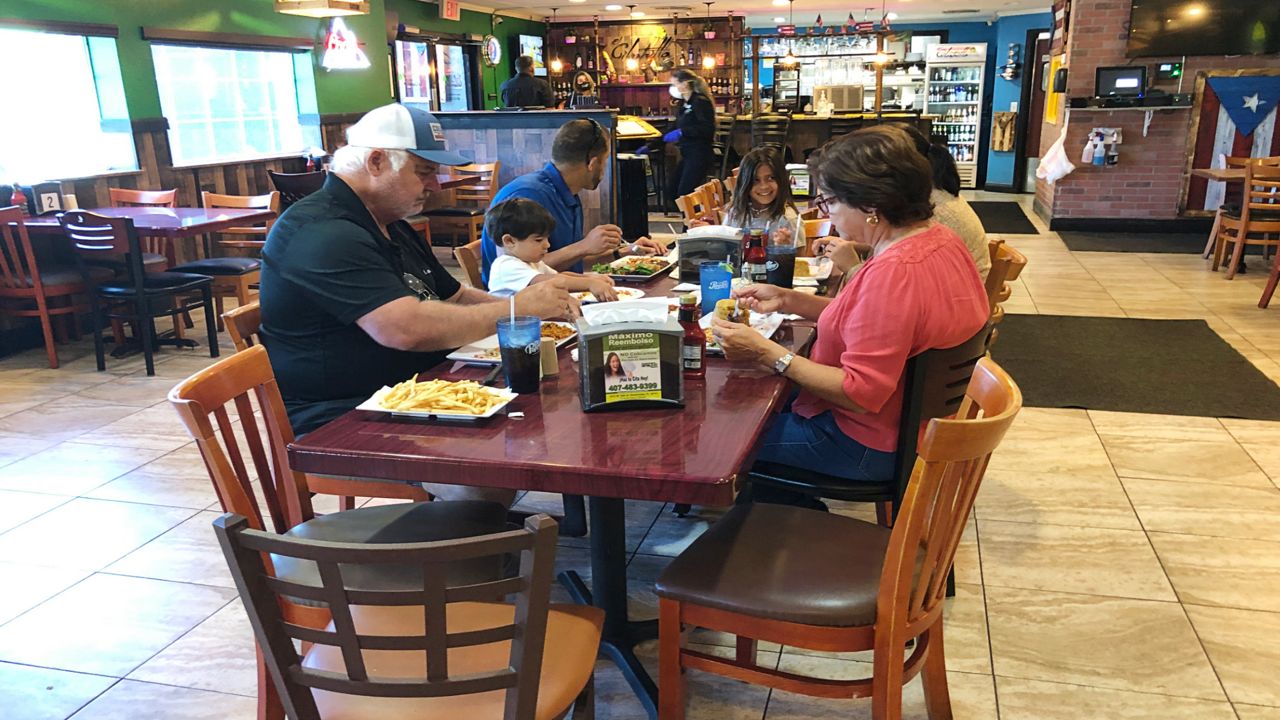 People eat in a restaurant in this undated file image. (Spectrum News/FILE)

TEXAS – Texas Gov. Greg Abbott in a news conference Monday announced the next wave of businesses allowed to resume operating amid the coronavirus pandemic.

Child care facilities can reopen immediately. Meanwhile, bars, bowling alleys, and other businesses can reopen with limited capacity on Friday, ahead of the Memorial Day holiday.

“By using safe practices, we are slowing the spread. By protecting our most vulnerable, our fatality rate is one of the lowest in America. With the help of our hospitals, our recovery rate is one of the best in the country. We are getting through this. But now, more than ever, we need to work together as one Texas. So as we move into Phase Two, be a good neighbor. Be a Texan,” Abbott said.

Reopening, of course, is optional, and it will be up to individual business owners to start preparing and put in place the state’s minimum standard health protocols.

Dr. Cherise Rohr-Allegrini, a San Antonio-based infectious disease epidemiologist and member of Bexar County's health transition team, said she believes a reason for optimism is that businesses will not rush to reopen their doors.

“Many businesses though are taking extra precautions, and some, even though they can open, are going to wait to open until they're in a better position,” she said.

The governor cited metrics guiding state leaders’ decision to reopen. He touted what he called the state’s declining “positivity rate,” among those who have been tested. According to state health officials, the seven-day rolling average on April 13 was about 14 percent, and now that rate is about 5 percent.

Rohr-Allegrini said while the downward trajectory is good, what also matters is knowing who is being tested. 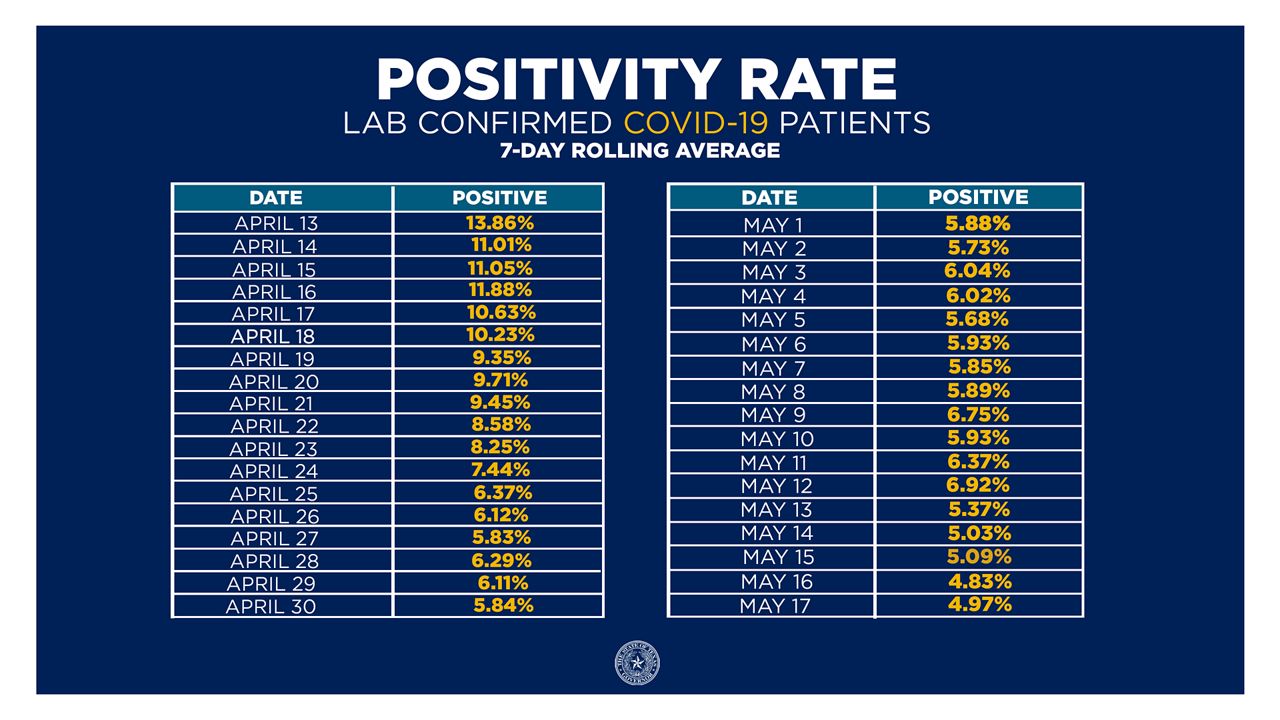 A chart displays identification of positive cases of COVID-19 in Texas from April 13 - May 17. (Source: Office of the Texas Governor)

Another key metric for the state is hospitalization, which remains steady. Texas hospitals have not been as overwhelmed as hospitals in other parts of the country, something Abbott said he hopes will continue. He said the state has “plenty” of ventilators, as well as hospital and ICU beds. Hospital capacity is in part why El Paso County’s reopening is delayed a week. Abbott described hospital capacity there as “too close for comfort.”

“Because people have been staying home for the past couple of months, they haven't gotten affected, we've been able to maintain our hospital capacity. So, it's going to be really important that we do other measures to slow the spread, so that hospital capacity could stay at its best level,” Rohr-Allegrini said. 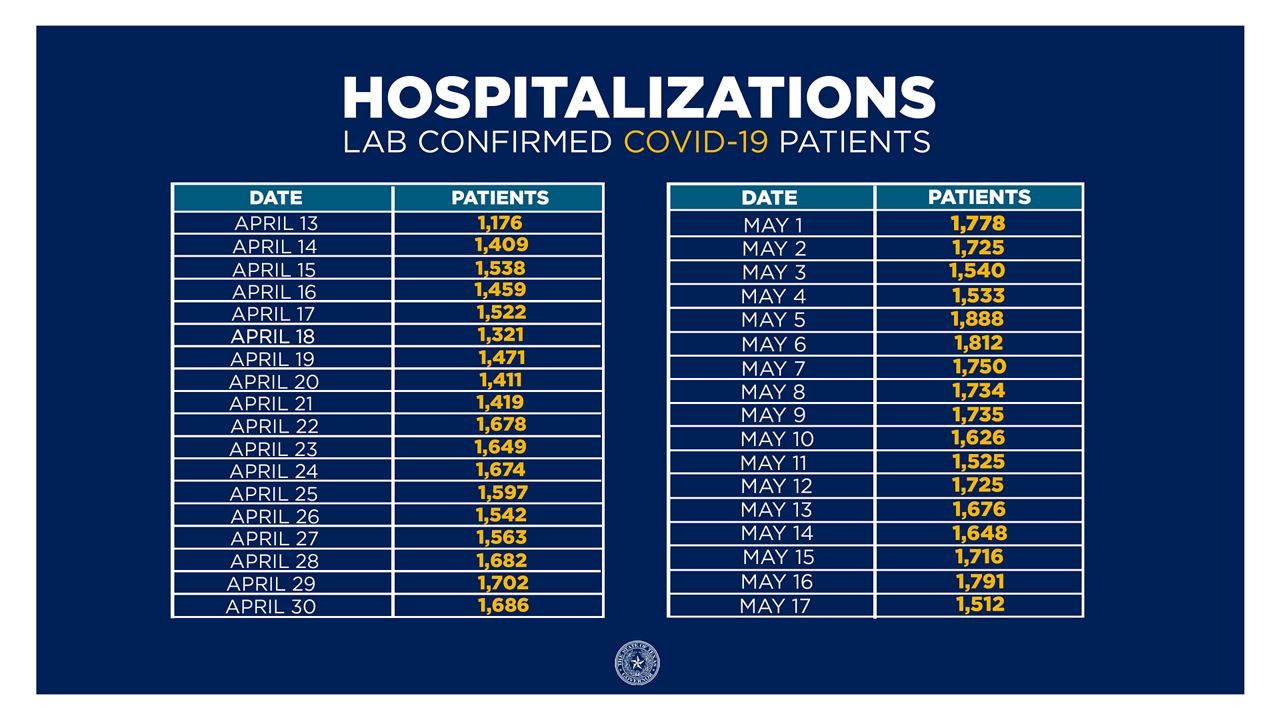 A chart displays coronavirus-related hospitalizations in Texas from April 13 - May 17. (Source: Office of the Texas Governor)

While testing has ramped up across Texas, the state still falls short of the 30,000 daily testing goal state leaders established in the governor’s report to reopen Texas.

Rohr-Allegrini said that in San Antonio, the goal was to have 3,000 tests per day in the city, and currently there are about 1,500 tests being done. She said while that number is double from a few weeks ago, it is still not at the level local leaders would like for reopening.

“We need to make sure we're testing every symptomatic person and every person that's been in contact,” she said.

Public health experts expect multiple waves of the coronavirus, which means there could be multiple peaks, and warn that a resurgence will happen if the proper precautions are not being practiced.

Rohr-Allegrini said she would have liked to have seen a bigger drop in the number of new cases the state gets every day before advancing into the next phase of reopening.

“If we go to a restaurant, we need to not pull a bunch of tables together. We need to stay with the people that we came with, because we look at those people as the one that we're already exposed to. If we're adding more people into the mix, we could risk seeing another peak immediately,” she said.