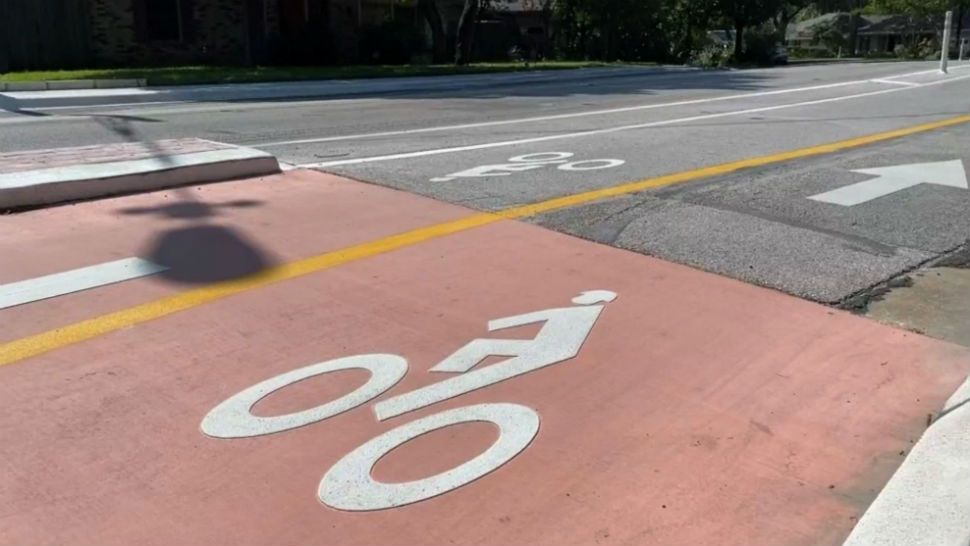 A photos of the bike lane in North Central Austin. (Meg Bonacorsi/Spectrum News)

AUSTIN, Texas — You've probably noticed a lot more people are out and about walking the dog, jogging or taking their bikes for a spin, but it's causing tension with some drivers.

Austin recently spent about $4 million to improve the North Shoal Creek neighborhood for cyclists, but not everyone agrees. A 50-year resident who chose to remain anonymous isn't a fan of the changes.

"Everybody was getting along with everybody. There was never an incident or accident or anything. I've seen more cases now that they have this up. People don't know where to go. They're kind of confused about the lanes themselves," he said.

Mary Noel Thomspon said she hasn't noticed an issue. She's lived in the neighborhood for a decade. She says during the quarantine she goes on a bike ride every day.

"I love it. I think it's very clearly marked and it seems a lot safer with the barricades and sidewalks. I like it," Thompson said. "It looks like everyone's enjoying the rules and following the path."

Whether you're a walker, cyclist or driver, the consensus seems to be the same—courtesy is encouraged.

"A lot of people don't use the stop signs properly and things like that. They blow through these stop signs and intersections and we've seen and had near-misses all the time," the anonymous concerned resident said.

Just like drivers, cyclists can be ticketed for not following the rules of the road.