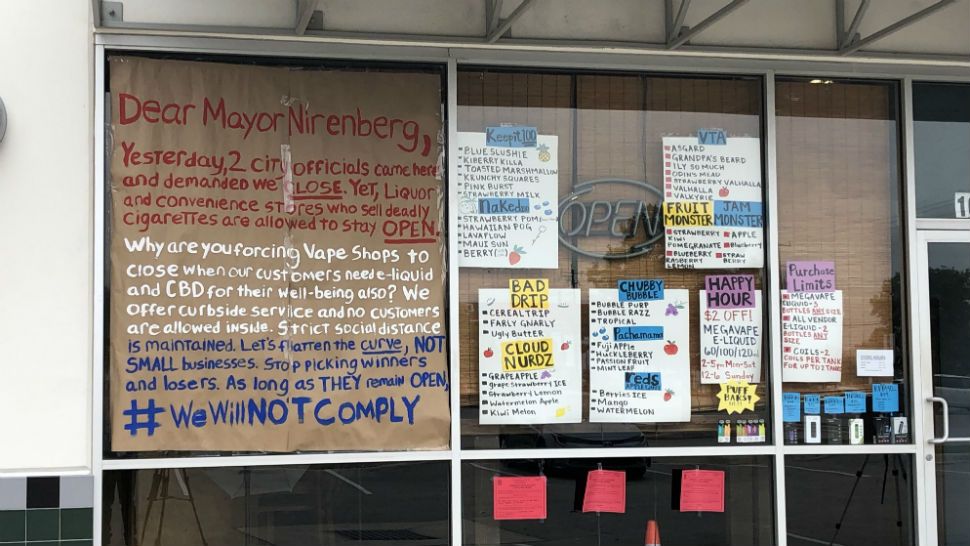 SAN ANTONIO — Most non-essential businesses in San Antonio have been shut down for nearly three weeks due to COVID-19. On March 18, the city ordered those businesses to close at midnight.

However, one San Antonio business owner has been evading those orders and vows to keep his vape supply store open. The owner of Mega Vapes, Brad Bennett, said all he's trying to do is keep his small business afloat and his four employees fed during the outbreak.

"People are suffering, businesses are suffering, but I just don't think there's a reason to shut down all business when we can take reasonable accommodations during this crisis," said Bennett. "We have a product that people need, they have to have it, it's nicotine and medicinal CBD."

Bennett and his employees have been consistently changing up the way they handle business transactions following the guidelines of the city and CDC, but when it comes to temporarily closing down the shop, it's a fight he's willing to take to court.

"We've already seen with the delays in unemployment insurance, the delays in the payroll protection program," said Bennett. "I haven't even gotten a call back from them yet even though I did it on Friday. So the fact is if this money doesn't come in, our employees are not going to have any money."

Despite multiple attempts by the city to shut down the business during the COVID-19 outbreak, Bennett says he's staying open to support his staff and their customers' needs.

The city issued at least four verbal warnings for him to shut down but has yet to issue a citation or fine. As the battle continues on between the city and the small business, Bennett's hope is that the mayor will hear him out.

"Mayor, I am asking you, I'm willing to sit down and explain my point of view on this, but please take a second look at this and reconsider what is going to happen to small businesses like me who just can't stay in business," said Bennett. "I fully expect if he continues on this course of action we will ultimately start receiving fines and/or risk getting our certificate of occupancy suspended."